This article originally appeared in our July 2006 issue. 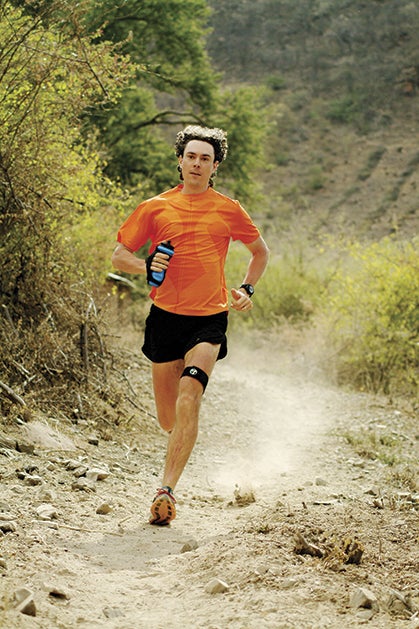 How can you run faster? With less effort? With fewer injuries? Simple. Improve your running form. Unfortunately, form is a neglected step-child. Many trail runners would rather focus on running’s more popular, quantitative offspring: VO2 max, maximum heart rate, lactate-acid threshold (LT). Higher numbers are akin to the Holy Grail. Unfortunately, max heart rate drops with age. And, while VO2 max and LT can be improved through long-term training, Mother Nature was either kind or cruel with the numbers she dealt you. But at any age, you can improve your form to boost running efficiency and run faster. With no additional training and only changes in form, gains of one to five percent are possible. Seems puny until you shave 30 minutes off your next 50-mile run!

Like your mama always said, stand up straight. Hold your head erect. Chin up. Chest out. Relax the shoulders, but don’t stoop or hunch over. Drooping your shoulders and arms constricts the lungs. Bend the arms at 90 degrees and swing them from the shoulders like a pendulum. Don’t force the movement; let it come naturally. Make all arm and leg motion forward. Arms should not cross over an invisible plane down the center of the body. Eliminate upper body sideways or twisting motion.

Tension is the enemy of good form, so be as relaxed as possible from the waist up. Check yourself on all types of terrain; you may be prone to tighten up when pushing up or flying down hills. For example, I see runners with clenched fists, especially going uphill. Clench a fist. Feel the tension travel up your forearm into the shoulders and neck? Instead, lightly touch the thumb to your index finger.

Picture these suggestions and you’ll see a tall and upright runner. Studies find the most efficient body position involves a line from the ear lobe through the top of the hip that hits the ground where your foot plants. A proper posture will have your butt tucked in. Think of Michael Johnson, sprinter par excellence: upright, very fast and body motion in direction of the run.

GET A LEG UP

Leg motion (including foot plant, stride length and cadence) is the most important part of form. And the most difficult to change. The foot plant can be on the toes, midsole or heel. When going steeply uphill, run on your toes (with the body still erect). While the tendency is to lean slightly into the hill, tipping too far forward will put additional stress on your quads and you’ll be more likely to slip on scree or soft and slick surfaces. On downhills, biomechanically endowed runners run midsole or on the toes with the body perpendicular to the slope and at a high cadence. To reduce foot and ankle fatigue, alternate among the three types of foot plants. On steep slopes, run on your toes. When the slope is moderate, alternate your foot plant every 20 to 40 steps. Run on your toes, then the midsole and, lastly, land on your heel and roll off your toes. Varying foot landing uses slightly different muscles, resulting in less foot- and leg-muscle fatigue. As you gain ankle strength, you’ll be able to roll your feet on steeper slopes.

On the flats, a midsole landing, like an animal pawing the ground, may be best. Analyses of top runners show they land midsole with a short contact time. Move your legs like a pendulum from the hip. Once again, motion is forward. Pretend you are running the white line on the shoulder of a highway. Your feet should land just left and right of the line. Don’t swing the legs too far back—no need to hit your butt like sprinters. The leg range of motion ahead and behind the foot plant should be about equal.

Look at an object in the distance. Does the object move up and down as you run? If so, your body is moving up and down, a waste of running energy. Don’t spring up, but forward. Concentrate on smoothness and easy foot landings. A quiet foot plant is smoother. Could you run with a book balanced on your head?

Measure your stride length in hard sand or a trail covered with light snow. Run normally over a measured distance, count the steps and calculate your stride length. For comparison, each running step of elite runners is equal to or greater than their height! Increasing a 60-inch stride length by only three inches is a five-percent gain. A nine-minute-per-mile pace becomes 8:33.

Check your cadence (i.e. number of strides per minute; see Training, No. 33, for determination method). Ideal is 180 steps per minute. Except on hills, a faster cadence lengthens the stride. Without exaggerating your stride, remeasure your stride length at a higher cadence. If your usual cadence is below 180, two or three times a week, include several minutes of higher cadence running.

BE FLEXIBLE, BE STRONG

Studies show that better flexibility allows a longer stride. Trail runners tend to be tight and score poorly on flexibility evaluations. Stretch after every workout. At a minimum, stretch the hamstrings, quads and calves.

Without adding bulk, strong abs and upper body hold your torso erect, eliminating wasted motion. Strong legs (quads and ankles) will lengthen your stride and reduce fatigue that causes a loss of form. Generally, I have decent form. My head is steady with relaxed hands and an easy arm swing. But my foot plant could be better. When I tire during a long run and am going downhill, my feet smack the ground with a loud clap. In effect, I’m braking. Strengthening my quads and ankles delays the onset of this annoying fault.

Dr. Jim Freim has been training athletes for over 25 years. He has won several races in the Masters division. He is a trail and triathlon “junkie” who needs daily trail runs for the fresh air and soft surfaces. He can be reached at jfreim@hotmail.com.