The trail runner’s guide to excuse-making 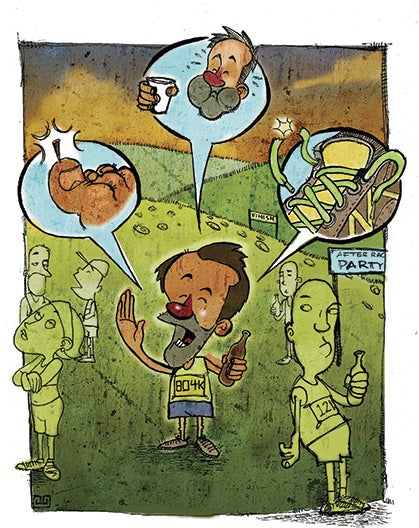 Everyone makes excuses, but trail runners are among the most prolific. Excuses are not lies, though, so there’s no need to fret over morality. They are merely rationalizations for less-than-optimal performances or slip-ups, and just plain make you feel better about yourself.

Win, lose or tie, you should have a library of excuses to explain why you failed to pull off the win, bombed far from your personal record or DNFed because you were so miserably undertrained. Following are some proven winners to add to your repertoire.

Author’s note: excuses based upon physical problems are the most convincing. Who’s to say you really didn’t
twist your ankle or get a migraine?

But you can’t just lamely dribble the excuse out—you must sell it with gusto! With proper body language (no slouching) and verbal delivery (sound pissed off) you can convince anyone that your excuse is not some illegitimate alibi, but a statement of fact. If the person doesn’t look like he or she is buying it, throw in a few “seriously’s,” “I swear on my grandmother’s grave’s,” and “I shit you not’s” to seal the deal.

So there you go. Have a bad race? Ha! Who cares? Sell one of the above excuses and you’re blame free. Just hope that the person you’re dropping the excuse on actually finished the race so you don’t have to listen to him/her whine a litany of unbelievably lame excuses.

Jonathan Thesenga was late turning in this column because he was surfing in Mexico to rehab a torn meniscus. Seriously.

This article originally appeared in our November 2005 issue.