Discovering the world of Chi Running

This article originally appeared in our November 2007 issue. 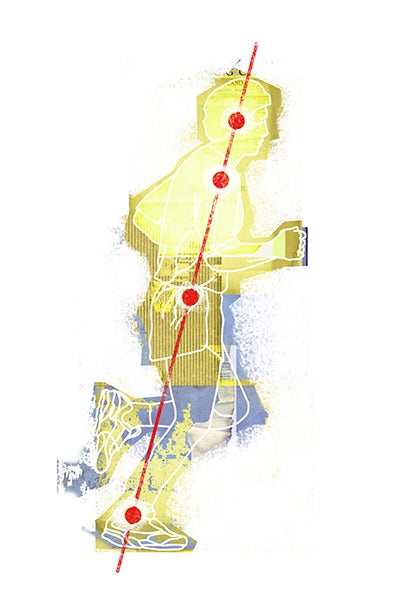 In just a few years, Chi Running has become an international phenomenon, with 100 certified coaches worldwide, over 100,000 copies of Chi Running sold and a slew of major media like The Washington Post, National Public Radio and Web MD reporting on this running philosophy that combines the moving principles of Tai Chi with running. Chi Running founder, Danny Dreyer, 57, travels the world, instructing runners of all abilities on how to run with focus and efficiency, and most importantly without injury.

The 2005 winner of the renowned Western States 100-miler in California, Annette Bednosky recently employed Chi Running to overcome a nagging partial hamstring avulsion injury. “My natural style is to run with a sway back, not leaning forward. As I work on the Chi Running posture I am forced to use my glutes and hip stabilizers more and ankles and hamstrings less, which has helped heal my injury,” says Bednosky. “Chi Running is not mindless. One of the reasons I run is to lose myself in the freedom of the trail, but for now it is work.”

Dreyer didn’t just stumble on the technique. Beginning with his first ultra, the JFK 50-miler in Maryland, in 1991, he began to analyze his own running form. Along the way he embraced the martial art Tai Chi and incorporated its principles into his running. Dreyer, who has completed over 40 ultras, including the Leadville 100 (1996, 8th place), and usually places in the top three in his age group, recently moved to Asheville, North Carolina, from San Francisco. There, in the Blue Ridge Mountains, Dreyer took time away from his trail running to share his philosophy with Trail Runner.

Danny Dreyer: No. I borrowed some of the key movement principles that make Tai Chi a great martial art and incorporated them into a way of running: correct body alignment, relaxation and the use of one’s core strength, or generating power from your pelvis, not your legs.

TR: What is “Chi energy” and how does it relate to your philosophy?

DD: Chi is a person’s life force, an energy that flows through your body. In Chi Running you correctly align your spine, which allows this energy to flow in an unobstructed way. In Tai Chi, using your muscles is considered the weakest form of the martial art. Through practice you learn to direct Chi without using your muscles.

In California I saw a group of traveling Shaolin monks do amazing things with Chi energy. In one demonstration, several monks held a razor sharp spear in upright position, while another monk climbed a step ladder and positioned his stomach over the spear’s point. Once balanced over the spear tip, he was given a push and began spinning on the point; his abdomen was charged with Chi energy and unharmed.

TR: In the title of your book you state that Chi Running will result in injury-free running. How so?

DD: One of the basic principles of Tai Chi is that you should always work to neutralize a force coming at you. This means not meeting a force with an opposing force, and letting it pass through you by offering no resistance. For example, if you are running down a trail at a 10-minute-per-mile pace, that’s a 6-mile-an-hour trail coming at you.

The last thing you want to do is stick your foot out in front of you to meet that force. Instead, if you keep your center of gravity ahead of your foot strike, your foot will move to the rear as it hits the ground, moving in the same direction as the ground beneath you and reducing the impact to your legs. The feet should move like wheels, hitting the ground with a mid-foot strike, propelling the body into very efficient linear movement.

TR: What are the main principles of Chi Running?

DD: Alignment and relaxation. Efficient running means having as many body parts as possible moving in the same direction. Your arms should not be swinging across your midline, your feet and legs should be aimed forward, not splayed out, your upper spine should be upright and not slumped and your pelvis should be in neutral position, not tilted down in front. You should be able to draw a straight line between your shoulders, hip bones and ankles. This form engages your core muscles and takes significant workload off your legs.

Relaxation is key to keeping your joints loose and your body moving freely  and efficiently. It also allows oxygenated blood to be more easily absorbed by your muscles.

Yes, The Elliptical Can Create Champions. Here’s How.