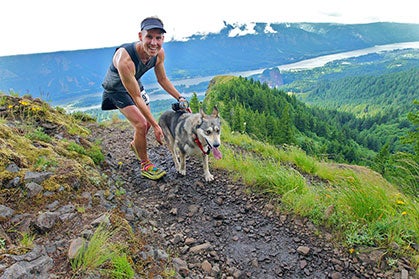 Graham Johnson with Mia at the Beacon Rock 50K in North Bonneville, Washington. Photo by Glenn Tachiyama. Check out this list of dog-friendly trail races.

Think humans were born to run? Try dogs. Working dogs run circles around their sheep, easily negotiating terrain that could put a kink in any human runner’s stride. Indeed, their relative the wolf covers ultramarathon distances in a day when stalking prey.

With sleek, spring-loaded legs that store and release elastic energy, dogs make perfect distance-running companions, particularly for those of us who wend the solitary ways of the wilderness.

Dogs keep us company without requiring constant banter. They spur us on as they wait— wagging and panting—at the top of a climb, and elicit a smile (or sometimes an expletive) when they careen down the trail dragging an oar-sized stick.

Robbins of Vancouver, British Columbia, started training with his dog, Roxy, five years ago. Currently, Roxy logs around 60 miles a week with Robbins. “Many a monsoonal day,” he says, “I’ve said to myself, ‘I never would have left the house if not for this silly animal!’”

It is crucial to exercise restraint at first. Intense training early in a dog’s life can permanently damage growing joints. Dr. Erica McKenzie, a seven-time ironman triathlete and associate professor of veterinary medicine at Oregon State University, explains, “It’s important to wait until your dog has developed appropriately. For small breeds, this could be nine to 12 months, while for larger breeds, you may have to wait until they are 18 months to two years old.”

Even as adults, dogs need to work up to long runs. McKenzie suggests starting slowly with a few two-to-four- mile runs per week at an easy pace, then building up distance and speed over several months.

Robbins emphasizes the importance of cultivating good trail etiquette: Keep your dog under voice control or use a leash to prevent it from harassing other recreationists and wildlife. He also recommends training your dog to stop off to the side of the trail by giving it a gentle bump when it brakes in the middle of a singletrack.

It should go without saying, but always pick up after your dog—and don’t leave poop bags next to the trail, even with intentions to collect them on your return trip.

According to Dr. McKenzie, most dogs develop surprisingly few injuries from distance running. “They are natural athletes,”

she says. With head-stabilizing muscles and an economical long- distance gait, dogs also possess a few traits that we might envy: an astounding aerobic capacity four times as efficient as ours, and the ultimate tool for balance on uneven terrain—a tail!

Barring congenital disorders, the major concern stems from the fact that a loyal dog will follow you off the end of the earth, or until it collapses from exhaustion. McKenzie cautions that most dogs will keep going until they develop heat stroke. Watch for symptoms like excessive panting, lethargy or disorientation. Any of these warrant immediate action—cool the dog’s belly and armpits with cold water and get it to a vet as soon as possible.

Because dogs don’t sweat, they can only dissipate heat by panting or losing it through their paws and bellies. “Hydration and cooling go hand in hand,” says McKenzie, so offer ample water and time to lounge in a mud puddle or creek. During the dog days of summer, lie low when it’s hot and exercise early or late. Large, deep-chested dogs are at risk for a serious condition known as bloat, in which excess air gets trapped in the stomach and puts pressure on internal organs. Swallowing large portions of food during vigorous exercise can trigger this—so feed only small amounts during and immediately after long runs.

When searching for a running companion, look for breeds valued for their working abilities. These include pointers, spaniels, retrievers, collies, heelers, and terriers. In colder climates, sled dogs do well. Regardless of a dog’s pedigree, though, they probably love to run. According to McKenzie, a team of poodles completed the Iditarod three times!

We trail runners all want the same thing: to rediscover that ancient feeling of movement in our lanky bones and let the challenges of nature coax our instincts out of hibernation. That elusive need drives us to the trailhead morning after soggy morning. Says Robbins, Roxy conveys that same emotion: “She looks up with a smile on her face that says, ‘I just love everything we are doing right now.’”

PACKING FOR TWO: Consider bringing these items to make long runs with your canine companion safer and more enjoyable.

> First-aid kit with moleskin and superglue. Take a page from mushers—with these, you can quickly mend a torn pad.

> Snacks. For runs under a couple of hours, your dog will be fine without food. However, for a 50K, bring some treats or a bit of dog food and allot small portions.

> Light leash. Even if your dog behaves well, you may encounter an exposed section of trail, a deer that’s too tempting to ignore or another cranky canine.

> Booties. In snow or on sharp, rocky terrain, booties help protect your dog’s paws. Get your dog sized by an expert at a good pet store and allow it time to get used to the feel. However, do not use booties in hot weather—they prevent heat dissipation from its paws.

> Rubber band. Unless you relish the sound of jangling tags, silence your dog’s IDs.