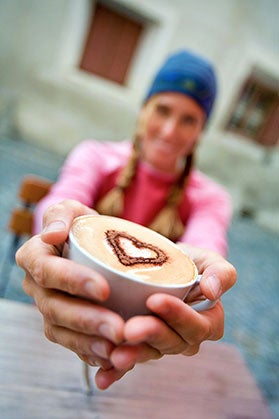 Caffeine is the most widely used performance-enhancing drug in sports. An analysis of more than 20,000 competitive-athlete urine samples revealed three out of four ingested caffeine either before or during competition, with endurance athletes using it the most. Prior to 2004, caffeine was listed by the World Anti-Doping Agency as a banned substance, considered to provide “unfair advantage” to athletes, based on clinical studies. In 2004, the decision was reversed due to the prevalence of caffeine in many common foods and drinks (chocolate, coffee, tea, etc.), which increased the likelihood that non-doping athletes could “test positive.”

In moderate doses (200 to 300 milligrams), caffeine has been demonstrated in numerous scientific studies to improve athletic performance and endurance in several ways. It encourages active muscles to use fat as fuel, delaying depletion of glycogen by more than 50 percent and resulting in the ability to utilize the stores later in a trail race. It also stimulates the central nervous system, which can sharpen concentration, and improve rapid reactions, including foot placement. By altering electrolytes such as calcium, sodium, and potassium in cells, caffeine has also been demonstrated to strengthen muscle contractions.

Since each runner responds differently to caffeine, recommended dose limits vary from athlete to athlete. In general, the Mayo Clinic recommends maxing at 200 to 300 milligrams (two to three cups of coffee) per day to avoid negative side effects such as sleep deprivation, nausea, cramping, anxiety, fatigue, headaches and gastrointestinal issues. Runners racing with excessive caffeine in their systems may experience additional side effects such as muscle tightness, cramping and dehydration.

The ideal time to consume caffeine is two to three hours before competition, as it takes several hours for caffeine to  enter the body and utilize fat stores for energy. Because daily use of caffeine can contribute to a tolerance, one way to ensure you reap the benefits on race day is to taper off caffeine for  the week prior to your race. International Marathon Medical Directors Association (IMMDA) recommends a limit of 200 milligrams caffeine before and during races, though every runner should experiment during training runs to determine the smallest effective amount.

Bumping your doses to 500 milligrams and higher, you run  the risk of more serious side effects, which may include nausea, heart palpitations, diarrhea and tremors. Because electrolytes play an important role in regulating cardiac rhythm, combining caffeine with electrolyte disturbances—very common in the later stages of an ultramarathon—may prime a runner’s heart for trouble.

Antony Chu, M.D., Director of complex Ablation in Arrhythmia Services at the Rhode Island and Miriam hospitals, warns, “Within the trail-runner’s  world, the effects of electrolyte abnormalities that can exist under conditions of extreme physiologic stress and concomitant high-caffeine ingestion are unknown.”

Caffeine may also exacerbate heat intolerance by acting as a diuretic. Because caffeine is a stimulant, it boosts perspiration and metabolic rate, speeding fluid losses during intense exercise and leading to dehydration.

Further studies are underway, and more definitive information relating to caffeine use with exercise should be available  by June 2013, following a summer consortium of medical professionals held in Spain.

Caffeine is the most common ingredient in energy drinks, but it is often combined with taurine, guarana and other ingredients. The combined effect cannot always be predicted. Says Chu, “Adding other stimulant-like ingredients while running an adrenaline-pumping trail race may create a dangerous situation that can precipitate heart palpitations.”

At the 2012 London marathon, a 30-year-old female runner died a mile from the finish line. Her cause of death was “acute cardiac failure due to extreme physical exertion complicated by the presence of DMAA.” Once an ingredient in the popular energy drink Jack 3D, DMAA (1,3-dimethylamylamine) was recently banned, but has been marketed as a dietary supplement in combination with caffeine and may be still available in some areas.

Caffeine- and taurine-containing energy drinks and strenuous physical activity have been shown to alter blood flow in the heart by constricting heart blood vessels and arteries. Taurine is an amino-acid-like substance that has been shown in labs to increase myocardial contractility (the force of the heart beat). Guarana, a natural stimulant that contains caffeine, is accepted as safe by the FDA. However, Chu warns, “Clinical case reports have implicated potentially lethal cardiac arrhythmias with the ingestion of a ‘natural energy’ guarana health drink containing a high concentration of caffeine.”

To ward off potential problems, get  a physical every year and talk to your healthcare provider about your caffeine use, including doses. Experiment with caffeine during your training runs, just as you  would your other nutrition choices. Before ingesting high doses of caffeine or trying new caffeine-enhanced products, consider that rescue time on the trails may be limited by geography and lack of immediate rescue personnel.