In the era of smart watches, sophisticated coaching programs and increasingly expensive running “essentials,” one of the most potent training adaptations that you can make happens to cost no money at all. And, it is accessible to every runner.

It is your ability to train your breathing to improve running performance.

“What if developing healthy breathing habits were just as important as developing healthy eating habits for maximal fitness? Or, even more so,” writes Patrick McKeown in his book The Oxygen Advantage. In his book, McKeown shares breathing techniques to scientifically improve your sports performance and health. He has worked with Olympic-level athletes as well as thousands of others interested in reducing breathlessness during exercise, improving aerobic capacity and delaying fatigue.

While it may seem simple, some basic breathing and diaphragm exercises, as well as practicing nasal breathing while running can have a significant impact on your running fitness.

“I tried using a heart-rate monitor, but it would give me inaccurate readings, so I decided to try nasal breathing,” says Josh Katzman, co-race-director of the Trail Animals Running Club (TARC) Race Series and course-record holder of the Don’t Run Boston 50K and 50-Miler and the Wapack and Back 50. “For close to six months nearly all of my runs were performed using nasal-only breathing. It felt really slow, but it gave my body the chance to build a huge aerobic base, and taught me how to pace myself optimally.”

To understand why breathing is so important for running performance, we must take a look at how oxygen makes its way from the air that we breathe to the tissues of the body.

When we breathe, we take in oxygen, nitrogen, carbon dioxide and trace amounts of argon. This diffuses into the bloodstream and gets carried to cells where mitochondria use them to generate ATP—the energy for contraction. During this process, CO2 pushes oxygen off of hemoglobin and into the cells in a process known as the Bohr Effect.

Given the nature of this process, it is fair to say that your running “fitness” is largely defined by your ability to tolerate carbon-dioxide levels in order to use oxygen efficiently.

Take this quick “fitness” test from The Oxygen Advantage (you don’t even need to lace up your running shoes)—inhale, exhale and pinch your nose. Now, time how long it takes before you get the first urge to breathe. 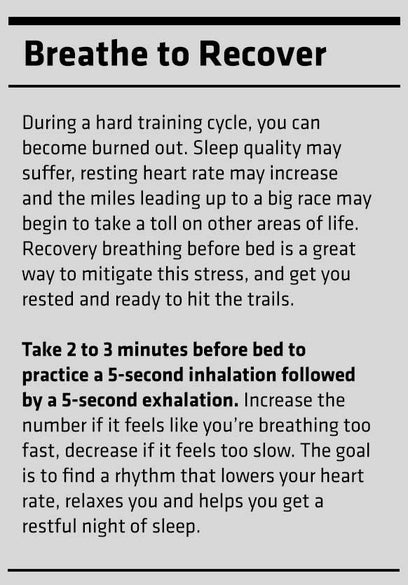 Was it 10 seconds? Twenty seconds? Thirty-seconds plus?

A common CO2 tolerance score for a runner who exercises regularly at a moderate intensity is 20 seconds. If your score is below 20 seconds, depending on genetic predisposition, you will likely find that you experience a blocked nose, fatigue and excessive breathlessness when running.

Improving this score can lead to improved physiological economy and a superior exchange between oxygen intake and CO2 output, allowing you to increase your running performance by simply improving your breathing.

Once you’ve increased your CO2 tolerance, it’s time to strengthen the most important running muscle that you can’t see—the diaphragm. Located below the lungs, the diaphragm is the primary muscle used for respiration. It plays a role in everything from oxygen utilization to the removal of waste to core stabilization when running.

Place your hands below your bottom ribs. Now, take several slow and deep nasal inhalations. Can you make your diaphragm expand? Think of trying to push your hands away with your breath. If so, you have access to one of your most important running muscles.

One of the keys to improving running ability is to maximize the diaphragm’s efficiency in simultaneously performing breathing activity and postural tasks. When these two functions are in alignment, you should find yourself running with a neutral torso—no back rounding or ribs jutting forward—while supplying sufficient oxygen to your running muscles.

Utilizing this important breathing muscle will give you a distinct advantage over relying solely on your lungs to uptake oxygen, as it performs 75 percent of the work required for respiration when properly functioning.

If you’re improving both your CO2 tolerance and the mechanics of diaphragmatic breathing, there is one more piece to the performance-breathing puzzle to address—the difference between mouth breathing and nasal breathing for peak running performance.

Nasal breathing, as opposed to mouth breathing, is a phenomenal way to dial in your race pace. With a bit of training, your ability to maintain nasal breathing can serve as an indicator of whether you are running at anaerobic or aerobic intensity.

“When we induce nasal breathing, it causes the vasodilation of blood vessels, which increases blood flow to the heart and brain, allowing the body to use oxygen at a better rate,” says Brian Mackenzie, an ultramarathoner, endurance coach and founder of the training program, Power, Speed, Endurance.

Nasal-only breathing is an optimal way to dial in your running pace and remain in control of whether you are in an aerobic or anaerobic state.

For a runner who is well adapted to nasal breathing, the ability to do so with ease is a solid indicator of remaining in a predominantly aerobic state while running. A strong urge to switch to a mouth

breathing pattern can serve as a warning that you are approaching your aerobic threshold. The necessity to abandon nasal-only breathing and adopt an exclusively mouth-in/mouth-out breathing pattern is a sign that you are entering a predominantly anaerobic state and can only maintain this effort level for a short period of time.

Once the effort level of a run surpasses the body’s ability to use oxygen as a primary fuel source, the body will resort to short-term fuel sources such as glucose.

Making this transition too early in a race results in “gassing out” or, more accurately, not being able to clear metabolic waste such as lactate quickly enough or not being able to generate sufficient ATP for the task at hand.

Nasal breathing may be your most accessible gauge as to whether your pace is “dialed in” or whether you are entering an anaerobic state too quickly by speeding out of the gate only to crash and burn later in your run.

“Nasal breathing skills have been instrumental in bringing my running performance to the next level,” says David Grimm, 40, of Freeport, Maine, who recently completed his first 100-mile race with the Vermont 100 Endurance Run. “Focused nasal breathing has not only delivered noticeable aerobic benefits, but it has also become a gauge and throttle to manage my intensity and exertion.”

—David Bidler is an ultramarathoner and performance-breathing coach from Portland, Maine. David owns The Distance Project, a strength-and-conditioning center for trail runners and endurance athletes. Follow him @the_distance_project on Instagram.