Can sleeping in an altitude-simulating chamber make you a stronger runner? 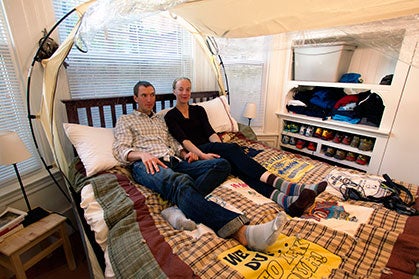 Nathan and Devon Yanko used their tent to prep for Colorado’s notorious, high-country race, the Hardrock 100. Photo by David Clifford.

This article originally appeared in our July 2013 issue.

If someone could promise you a drug-free way to better endurance, what would you give up in return? How much would you pay to increase your body’s production of red blood cells, which carry oxygen to your taxed muscles, allowing you to run harder in your next race? And what if you could make these gains while you sleep? Well, for a price, you can.

The only World-Anti-Doping-Agency-and United-States-Anti-Doping-Agency-approved method of providing such a boost is to sleep in an altitude chamber that simulates the effect of sleeping high with the convenience of training low(er). Many successful trail runners now utilize this tool as part of their training strategy.

The human body is incredibly sensitive to oxygen deprivation caused by exposure to a hypoxic (low-oxygen) environment. Reduced oxygen content in the blood is sensed by the kidney, which naturally stimulates the production of the hormone erythropoietin (EPO), which travels to the bone marrow and pumps up the production of red blood cells. Ultimately, this increases the volume of red  blood cells available for oxygen uptake and delivery. According to Colleen Glyde Julian, Ph.D, research scientist at Denver, Colorado’s altitude research center, this process boosts both sub-maximal and maximal exercise performance. in other words, athletes can push harder before suffering the effects of “going anaerobic.”

Edmund R. Burke, Ph.D., the Director of Exercise Science at the University of Colorado at Colorado Springs, supports the conclusion of numerous studies that altitude training helps improve an athlete’s “performance both for competing at altitude and at sea level.” among the well-documented physiological effects of altitude, trail runners can appreciate having better lung capacity to breathe more oxygen into their bloodstream, a lower resting pulse, a boost in total blood volume, increased Vo2 max for elevated stamina and higher volume in mitochondria so the body can better convert oxygen to energy. These advantages explain why so many runners flock to train and live in communities like Flagstaff, Santa Fe, Mammoth, Park City, Silverton and Boulder.

But it isn’t always realistic to relocate for the sake of extra red blood cells, and it isn’t usually economical to commute for purposes of hypoxic exposure. Fortunately, the technological alternative offered by oxygen scrubbers (devices that pump oxygen-depleted air) allows athletes to live at lower elevations yet sleep or even live in rooms or tents that simulate the effects of altitude.

According to Julian, an accomplished runner herself, “The potential performance advantages of living and training at high altitude have to be weighed against the fact that a low-oxygen environment compromises high-intensity training and recovery. Sleeping in an altitude tent and training at lower altitudes may offer the best of both worlds, optimizing performance by increasing red-blood-cell mass without risking the quality of training as you would living at high altitude.”

Based on her studies at the Altitude Research Center, Julian says that sleeping in a hypoxic tent never fully compensates for the acute challenges associated with racing at high altitude. “Exercise capacity will always be reduced at high compared to low altitude, regardless of any benefit achieved through sleeping in a hypoxic tent or even permanently living at high altitude,” she says. “The body simply cannot fully compensate for reduced oxygen availability.”

Three companies, Colorado Altitude Training (CAT), Hypoxico and Higher Peak, manufacture tents, masks—which connect directly to the scrubber and allow the user to wear it while running on a treadmill or riding a stationary bike—and, in the case of CAT, whole-room conversions. The systems create hypoxic environments by using an air separation unit to pump low-oxygen-content air into the room or tent. While the inside pressure remains the same as the outside, unlike a hypobaric chamber, which is more akin to a casket because it also lowers the air pressure, the oxygen level is gradually reduced to match that of the desired altitude. Working in tandem, a CO2 scrubber removes the buildup of carbon dioxide produced by metabolism.

Beyond the financial costs, sleeping with less oxygen can leave you fatigued, depriving your body of its ability to recover from the day’s workout, and cause weight loss due to the body “working” harder even while dormant. For ideal effect, spend more time at a slightly lower simulated elevation than you might think. Coaches and manufacturers warn against trying the technique of spending shorter periods at lower oxygen (higher simulated elevation) as a “quick-bake” approach because it further compromises sleep quality and muscle recovery.

Californians Devon and Nathan Yanko got a tent two years ago when Nathan was training for Colorado’s high-country Hardrock 100. “We knew it was working when we went to Hardrock/Silverton and had minimal problems training there,” says Devon. The tradeoff was poor sleep, especially when they cranked the tent up to simulate 14,000 feet.

One-hundred-mile king, Karl Meltzer, who lives just over 4,500 in Sandy, Utah, says the tent has helped his running. He finished fourth at the 2013 Bandera 100K, having run only 40 miles in six weeks prior due to injury, and attributes that success to his Hypoxico tent.

Having a tent in your bedroom may have some interesting social impacts. I wrote a story titled “Boulder’s Best Pick-Up Line” a decade ago, touting altitude chambers as sure things for those trying to hook up with aspiring athletes seeking training benefits. But sharing a tent also leads to more humidity and less available oxygen.

Just ask the Yankos. “It can get pretty hot and steamy in there from us battling for the oxygen molecules,” says Devon. “The tent doesn’t calibrate for one vs. two people, so it is tougher  to share the tent than sleep  in it alone.”

Neal Gorman, Grand Slam record holder, also shares a Hypoxico  tent with his wife and recommends prioritizing comfort—Gorman’s setup has three different entry points, accommodates his bed and night stand and allows standing inside. When asked if there were any amusing stories he responded, “What happens in the tent stays in the tent, but beware of fiber close to bedtime.”

> Although response to altitude chambers varies from person to person, the goal should be to spend at least a month sleeping in your tent, preferably for six to 10 hours per night at least six nights a week.

> Medical studies have shown that you should slowly adjust  to reach the desired simulated elevation of 8,500 to 12,500 feet.

> Using a pulse oximeter, set your tent’s oxygen level so that your oxygen saturation drops to 92 percent.

> Because the use of the tent can leave you fatigued, sleep outside of it the night or two before a race or big training run.

>Colorado Altitude Training (altitudetraining.com) scrubber units range from $4200 to $4500, with the tent and masks adding $175.