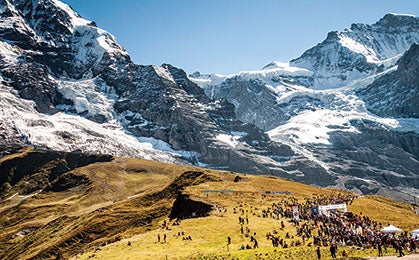 If you sign up for a destination race like the Jungfrau Marathon (pictured above), stack the odds of having a good race in your favor by paying attention to travel details. Photo by Chris Hunter.

When preparing for a goal race at a far-away destination, you do everything you can to maximize training. Then you deliberately rest and try to stay healthy during your taper. But what do you do when it’s time to travel to the big event?

Ideally, you plan to make travel stress-free and you arrive 100-percent race ready. Surprisingly, however, many of us don’t sweat the details of travel in our race plans and encounter problems en route that can sabotage the physical conditioning and mental equanimity we worked so hard to achieve.

So Trail Runner asked four pros and experienced travelers for their advice on getting to the race in top shape.

Our panel of experts:

2013 Grand Slam of Ultrarunning record holder and coach to other champions. Has raced in over 30 countries on six continents.

2012 100K World Championship winner, who in the past two years raced numerous ultras in South America, Europe and Asia. Her work for an international humanitarian group takes her around the globe.

2010 USA Track & Field Master’s Ultrarunner of the Year, who in recent years raced throughout the United States and Europe. Dunlap flies weekly as an executive and investor for tech start-ups.

Past winner of several 250K desert-crossing self-supported stage races and the Vermont 100. She travels frequently for her work for human-rights organizations, and was recently stationed in the South Sudan and now in Gaza.

Plan to arrive at the location early. Build in extra travel days to acclimate and erase any lingering effects of jet lag. Amy Sproston aims for a minimum of three, while Ian Sharman recommends arriving a day early for every time zone you cross.

When Sharman violated his rule of thumb at the 2013 Vermont 100, the second race in the Grand Slam, he paid a price.

“I should have followed my own advice and arrived several days before the race,” he says. “Instead, I paced a friend at California’s Badwater 135 on Monday and Tuesday, flew overnight Wednesday and then slept in a small rental car at the start on Friday. It’s not surprising I felt horrible from very early in the race and had a really tough day.”

Use apps and upgrades to book a better seat. Use an app such as seatguru.com to find the best seat on your flight. Aisle seats are usually preferred, as they allow you to easily get up and move around. If you can afford it, upgrade to premium for more legroom and easier check-in.

When you have your flights and lodging booked, reduce travel stress by organizing all your information in one place by using an app such as TripIt.com.

Find contacts and helpers at your destination. Don’t be shy—use social media, such as an event’s Facebook page, and internet research (Trail Runner’s Trail Club Finder, www.trailrunnermag.com/trail-clubs, is a great resource) to find and connect with locals at your race destination.

“Facebook and Twitter are amazing for finding local runners,” says Scott Dunlap, “and I ask them for restaurant suggestions, advice or to meet up for a quick jog.”

Finding a generous local to crew for you can ease your packing and logistics by supplying a few of your race needs, like a cooler for ice or a blanket for a nighttime aid station. That way, your luggage is less likely to bulge with gear- and food-filled drop bags.

Explains Sharman, “I generally don’t use drop bags. … I aim to have my crew in 100s usually comprised of local friends in the area of the race. The smaller the logistical requirements from my side, the less things can go wrong.”

If bringing food abroad, check customs regulations. Generally it’s OK to bring packaged food, such as bars and energy gels. But some food items are prohibited, such as fresh fruits, eggs and meat, and every country’s rules are different. Some countries (including the United States) prohibit dried as well as fresh meat products, so if you bring a bag of your favorite homemade jerky, you may have to toss it. Also, realize that you may not be able to purchase your preferred race foods in your destination.

Don’t put off packing. Make a detailed list well ahead of your travel date, and constantly update it. Then, pack a few days in advance to avoid last-minute panic, and so you don’t forget essential items. Sharman laments his 11th-hour packing blunders: “I forgot to bring my watch one time and my race food another time.”

Carry on or wear the essentials. “I divide everything into two piles: things I simply cannot race without, and things I would prefer not to race without. Everything in the first category comes with me, to the extent possible,” says Stephanie Case. “You can cut down on the size of your carry-on by wearing as much of your gear as possible. At a minimum, I try to wear my running shoes, watch, shirt and jacket, and, if I’m feeling brave, I whip on the tights!”

These runners suggest the following items for a more comfortable travel experience:

“No garment has been more valuable to me for my 90-plus flights per year,” he says. “It’s warm enough to combat the cold airplane air, soft enough to sleep in and you can pull the hood right over your eyes to block out distractions.”

Move around to prevent DVT/PE. During 2012, Sproston had a flurry of travel—from Kenya to Southern California and Portland, and then to Istanbul and New York. After the trip to Turkey, she noticed pain in her calf. It turns out she had the serious condition Deep Vein Thrombosis (DVT), or clotting in the deep veins of her leg. The DVT progressed to life-threatening Pulmonary Embolism (PE) when the clot broke loose and traveled toward her lungs.

Research suggests that endurance athletes are at a greater risk for DVT/PE, possibly because their low resting heart rate makes it more likely that blood will pool and clot during extended periods of sitting.

Dehydration following an endurance event can be another contributing factor, as it thickens the blood. Blood thinners and a trip to the ER saved Sproston, but she suffered agonizing leg and chest pains, and her training and race plans had to be put on hold for a while. How do you prevent DVT/PE? Simple: keep moving, and stay hydrated. “Now, I’m constantly getting up and doing calf raises to keep my blood moving,” says Sproston.

Drink a lot. Being well hydrated promotes good health in numerous ways—especially flushing out a virus you picked up en route. “People don’t realize how dehydrated they get on planes,” says Case. While a little alcohol can help ease travel tension, avoid the enticements of airport bars and the beverage cart.

Be germaphobic. Wash your hands with soap frequently, and avoid other travelers who are coughing or who have babies with runny noses.

Run off your jet lag. Even if you’re tired, go for an easy run as soon as possible upon arrival. “It refreshes you from the hours of sitting, and gets you used to your new surroundings,” says Sharman.

If your travel plans fall apart, persevere. Like a challenging trail run, travel requires endurance, navigation and troubleshooting. If your well-planned itinerary doesn’t go according to plan, be flexible, find an alternative route and keep a sense of humor.

Case endured a travel nightmare in 2010 flying to Australia for a 250K stage race, when she became stranded in London due to a volcanic eruption in Iceland that affected travel across Europe.

“I couldn’t bear missing the race, so I ended up taking a train to Paris, then splitting a cab with seven strangers all the way to Madrid,” she recalls. “From there, I flew through the Middle East to Singapore and finally Australia. The whole journey took six days and thousands of dollars, but I made it.” Even better, she finished the race 2nd female, 8th overall.

“While it was certainly stressful, I ended up meeting some great people and sharing quite a few laughs—an experience I’ll never forget.”

Sarah Lavender Smith, a Contributing Editor at Trail Runner, loves to travel but hates to fly. She writes about trail running and travel at TheRunnersTrip.com. This article originally appeared in our March 2015 issue.