Toe the line at your first trail race

The sun was just rising at the start of the Desert RATS Trail Running Festival 25-Miler in Fruita, Colorado, … 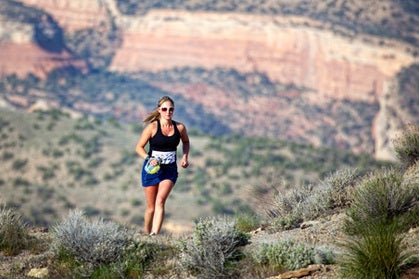 The sun was just rising at the start of the Desert RATS Trail Running Festival 25-Miler in Fruita, Colorado, on April 16, quickly warming the crisp high-desert air with dry. It would be nearly 40 minutes before the lead pack reached the first aid station, and closer to two hours for some.

There, cheerful aid-station volunteers, refilled racers’ hydration systems, before sending them off on another stretch of solitude, a long section of slickrock trail with snaking switchbacks that ascended to an overlook of the mighty Colorado River.

This season, thousands of runners will toe the line, which often is just a toe-scratched line in the dirt, at their first trail race. Here, seasoned trail runners and race directors offer advice on making the most of your trail racing experience.

There Is a Pre-Race Meeting for a Reason

Trail-race courses do not always follow a single trail, and may feature trail junctions requiring abrupt turns, which may appear illogical. With multiple trail systems likely in the vicinity of trail-race venues, which are usually state parks, Forest Service or BLM land, paying attention to course markings is crucial. “Make sure you are always running with your head up,” says Jeremy Duncan, an experienced trail runner in Carbondale, Colorado, who is notorious for getting lost. “It’s easy to zone out while racing, but make sure you pay attention to your surroundings.”

Most trail-race websites offer course maps with detailed directions, so study them carefully. Due to inclement weather or public trail usage, like hikers and bikers, race-day course changes may occur. Attending a pre-race meeting will provide such information.

Pack it in; pack it out

Just because you’re racing, it doesn’t mean the “Leave No Trace” policy suddenly no longer applies to you. “We have a strict policy at our events,” says Morgan Murri, founder and race director of the Pagosa Peak Trail Series in Pagosa Springs, Colorado. “If you litter and we see you or someone reports you, you are out.” There are no large clean-up crews on trails and your trash could be harmful to wildlife.

Most land-use permits require that the race organizers remove all trash after the event so trail races usually have a “Sweeper,” someone who runs the course after the race and picks up anything left behind. “Probably 90 percent of the trash you find on the course will be gel packets,” says Glen Delman of Boulder, Colorado, who has swept many trail-race courses in his day. “They get sticky and people don’t want to stuff them back in their packs.” If you need to lighten your load, wait until you reach an aid station.

All trails are different — unlike the painful sameness of pavement—and that is what makes trail running exciting. “Almost every race has a different personality. From flat, fast trails to rolling Midwestern plains to gnarly, high-altitude, trails,” says Joe Prusaitis, race director of Texas’ Tejas Trails. “So for your first race pick a trail that fits your personality.”

A word of caution—if you are coming from the roads, ease into new terrain. Don’t jump head-first into a gnarly singletrack race with extreme elevation change. Root or rock infested trails, can wreck havoc on your body if your stabilizer muscles are not developed. Patience is key. “After training on flat roads all winter, I ran a really challenging trail 30K this spring,” says Blair Speed, a beginning trail runner from Bozeman, Montana. “I ran well, but had a really hard time recovering. My legs weren’t used to all the obstacles.”

Singletrack Is Not a Two-Lane Highway

Singletrack makes passing trickier than on roads. As you approach other runners from behind, politely let them know you want to pass. If you’re on a tight singletrack with a 100-foot drop on one side, don’t tailgate; wait until the trail opens and you can safely pass. And if you’re going to pass someone, make sure you really are faster. There is nothing worse than a 30-minute game of yo-yo in the middle of a race to give you both a case of the trail-running equivalent of road rage.

On an out-and-back course, when trail runners come face-to-face, it’s best to split the trail as evenly as possible; no one has priority, no matter his or her speed. Each runner should step slightly to their left and ease by cautiously. Says Devon Crosby-Helms, an elite road and trail runner, “Share the trail and do your best to accommodate one another. “Safety is first. Make sure each runner has enough time and room for a safe pass.”

Ultimately, communication is key, says Jenn McConnell, a trail runner in Waterville, Pennsylvania, “I keep my eyes and ears open all the time. If I hear someone come up behind me, I always say, `Let me know when you are ready to pass.’ I leave it up to them.”

Says Bryon Powell, “The trail running community is small and has a tradition of openness. New runners are quickly recognized and welcomed.”