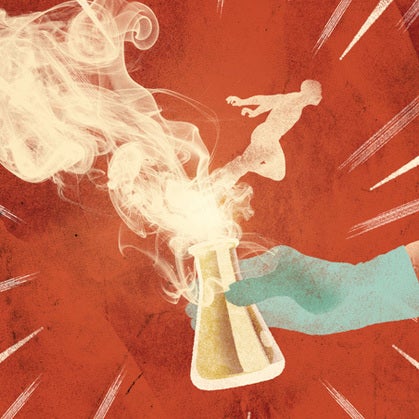 One of the great things about trail running is that in its simplicity of putting one foot in front of the other, it can also be a scientific endeavor to maximize speed and endurance. Here are four physiological lessons that can make you a faster trail runner.

While VO2max (the maximum volume of oxygen your muscles can consume per minute) has received most of the attention among runners and coaches, a high VO2max alone is not enough to be a good runner. And although you can improve your VO2max, it is largely genetically determined.

Lactate threshold (LT) and running economy (RE) are more responsive to training and exert a greater influence on your performance. I have tested many athletes in the laboratory with elite-level VO2max values, but few of them were capable of running at the elite or even sub-elite level, because they did not have a high LT or well-developed RE.

LT is an important physiological variable that demarcates the transition between almost purely aerobic running and running that includes significant oxygen-independent (anaerobic) metabolism. It represents the fastest speed you can sustain aerobically. Specific LT runs increase your LT to a faster pace, delaying fatigue.

How to Improve LT

:: LT-Plus Intervals: Two sets of 4 x 1000 meters at 10 seconds per mile faster than LT pace, with 45 seconds rest between intervals and two minutes rest between sets.

RE is the volume of oxygen consumed at sub-maximum speeds. There are marked differences in the amount of oxygen different runners use when running at the same speeds, which is a major factor explaining variance in running performance in runners with similar VO2max values.

RE is probably even more important than LT in determining distance-running performance, because it indicates how hard you’re working in relation to your maximum ability to use oxygen. I have yet to see a runner with superior RE who does not also have a high VO2max and LT.

While many runners and coaches think RE is a reflection of running form, it is influenced more by capillaries and mitochondria, the microscopic structures that influence oxygen delivery to the muscles. Research has shown that runners who run a lot (more than 70 miles per week) tend to be more economical, possibly because of the effect high mileage has on increasing capillaries and mitochondria. High mileage may also improve RE via the commonly associated weight loss, which lowers the oxygen cost of running. A high repetition of running movements may result in better biomechanics and muscle-fiber recruitment patterns. Power training with very heavy weights and plyometrics has also been shown to improve RE through a neural mechanism.

How to improve RE

:: Heavy strength training: Three to four sets of three to five reps with greater than 85-percent of your one-rep max.

LESSON 2: There are different muscle-fiber types.

Some runners have superior speed, while others have superior endurance. Much of this difference is due to the types of fibers that make up different muscles, which also dictate how you respond to training.

If both runners want to race a 5K or 10K, the former should initially do longer intervals, trying to get faster with training, such as three-quarter-mile repeats at 5K race pace, increasing speed to 3K race pace or decreasing the recovery as training progresses.

The latter runner should do shorter intervals, trying to hold the pace for longer with training, such as half-mile repeats at 3K race pace, increasing distance to three quarters of a mile or increasing the number of repeats as training progresses.

How to Efficiently Train According to Muscle-Fiber Type

LESSON 3: A larger, stronger heart can pump more blood and oxygen to your muscles.

A large heart is a physiological condition of genetically gifted and highly trained runners, known in the scientific community as Athlete’s Heart. While you may never attain the heart size and associated cardiac output of an Olympic champion, specific training can make your heart larger and improve your performance.

Intervals provide the heaviest load on the cardiovascular system because of the repeated attainment of the heart’s maximum stroke volume and cardiac output (VO2max). In response, the left ventricle enlarges so that more blood and oxygen can be sent to the working skeletal muscles.

How to Train the Heart Muscle

:: Run intervals close to one-mile race pace for recreational runners and two-mile race pace (10 to 15 seconds per mile faster than 5K race pace) for trained runners. You should be within a few beats of your maximum heart rate by the end of each interval.

:: Work periods should last three to five minutes and recovery periods (jog to keep oxygen consumption elevated) should be equal to or slightly less than the work periods.

Enzymes function as biological catalysts that speed up chemical reactions, providing you with quick energy to run. The amount of an enzyme also controls which metabolic pathway is used. Having more aerobic enzymes steers metabolism toward a greater reliance on aerobic metabolism at a given sub maximum speed.

Enzymes are also activated or inhibited, determining which metabolic pathways are functional during certain cellular conditions. Thus, enzymes essentially control metabolism and therefore control the pace at which you fatigue. Research has shown that aerobic training increases the amount of enzymes in your muscles.

How to Efficiently Train Enzyme Function

:: Progressively increase your mileage each month.

:: Interval training (see “How to Train the Heart Muscle” above).

Dr. Jason Karp is a nationally recognized speaker, writer and exercise physiologist who coaches runners of all levels through RunCoachJason.com. He holds a Ph.D. in exercise physiology and is founder and coach of REVO2LT Running Team. He is also author of 101 Developmental Concepts & Workouts for Cross Country Runners, the forthcoming Women’s Running Bible and 101 Winning Racing Strategies. For more information, visit RunCoachJason.com.

To determine your fiber type, you can either get a muscle biopsy or ask yourself the following questions:

(a) Are you able to hang with your competitors during the middle stages, but get out-kicked in the last quarter to half-mile?

(b) Do you have a hard time maintaining the pace during the middle stages, but can finish fast and out-kick others?

• Which type of workouts feel easier and more natural?

• Which workouts do you look forward to more?

(a) Long intervals and tempo runs.