In the early 1990s, Marshall Ulrich was running the Badwater Ultramarathon, a 135-mile race through Death Valley in the summer, on a near annual basis. Every year, the renowned ultrarunner would expect to lose at least half of his toenails after Badwater—if they didn’t fall off during the race.

“They’d grow back in a funky configuration and get a fungus growth underneath them,” says Ulrich, now 63. “Then you’d get one nail bed that was almost growing over the top of another nail bed … at maybe a 22-degree angle. A couple of them would start wearing a hole in the top of my running shoes.”

For trail runners, foot abuse goes with the territory. We slam our feet onto hard surfaces thousands of times a week, ram them against rocks and roots, confine them in tight, sweaty shoes for hours on end and pit toe against toebox on merciless descents.

This relentless beating can result in toenails that blacken and fall off and painful blisters that derail the best-laid race plans. Thankfully, with a few quick fixes, the risk of blisters and black toenails can be minimized, and the pain managed when they do occur.

Ulrich’s toenails were bothersome enough that he sought a drastic solution: permanent surgical removal. After applying a local anesthetic to numb his toes, a surgeon cut out his nails and cauterized the wounds to staunch the bleeding.

“I was running high, high miles, and I knew I was probably going to be running for the rest of my life,” Ulrich says. “It was a very practical decision.”

A black toenail—or subungual hematoma, in medical parlance—results from blood that pools under the nail and sometimes causes it to separate from the nail bed.

“The nails hit the top or front of the shoe, and the repeated trauma leads to a bloom blister under the toenail,” says longtime runner John Vonhof, author of Fixing Your Feet: Injury Prevention for Athletes and online resource of the same name. “Often, untrimmed toenails contribute to the problem, as socks catch on these and force them back, causing redness and swelling.”

Few cases are as severe as Ulrich’s, who was running Badwater and other ultras competitively at the time of his surgery, but even a comparatively minor hematoma can cause a runner physical (and aesthetic) discomfort.

“As a long-distance runner, the threat of toenail loss is always there,” says Guy Oliver, a runner based in London, U.K., who covers self-supported trail running on his blog Fastpacking Guy. “Blisters don’t bother me too much, but I do get a bit squeamish when losing a vestigial talon. The thought is somehow worse than the inconvenience or pain.”

Ulrich emphasizes that surgery should be a last resort—his procedure inspired a few other runners to do the same, a result he says he did not intend. “For some people, I think there’s a glamor to it,” he says. “I would encourage people to consider alternatives.” 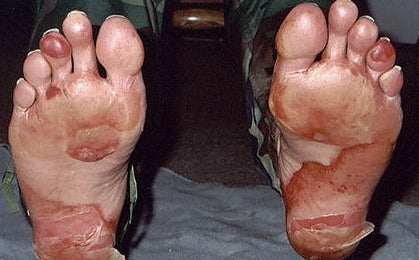 “Too many runners think blisters are a common result of running and they just need to tough it out,” says Vonhof. “At a multi-day stage race in Colorado [one year], I helped 15 runners with large blisters on both heels that had torn and created a pocket of loose skin.”

Blisters form when friction against an area of the foot causes movement beneath the skin, creating a pocket of fluid. Ill-fitting shoes that rub against certain parts of the foot can increase the chance of blisters forming, as can prolonged exposure to heat and moisture—so take extra care on hot days or runs with stream crossings.

Ras Vaughan, who has finished several 200-mile races and blogs at UltraPedestrian.com, recommends wearing toe socks and shoes that move and flex with the foot’s natural movements. “This minimizes friction points where the shoe tries to control the movement of the foot,” he says. Vaughan also applies a sports lubricant to spots that are prone to blisters.

Experienced ultrarunner Matt Mahoney, of Melbourne, Florida, says he rarely gets blisters; he attributes that fact to sockless running and barefoot training sessions that have toughened the skin on his feet. “When I first started running without socks it was a problem until my feet adapted … now I never wear socks, even for 100-mile runs.”

Vonhof, however, cautions that while toughening one’s feet works for some runners, it won’t work for everyone. “You can still get blisters under toughened skin or calluses,” he says. “These blisters are very difficult to drain, since the fluid can be several layers of skin deep and the fluid pocket can be small but very bothersome. I prefer soft skin.”

“Find what works for your feet, and learn what to do if that fails,” he says. “What works today may not work tomorrow. There are many variables to keeping one’s feet healthy during a race.”

Wear shoes that fit well and socks that wick away moisture. Vonhof also suggests runners experiment with other products to find what works for them, including:

8 of the Best Socks for Trail Running

The Best Trail Running Gear For Under $50

Gear for Beginners: Must-Haves vs. Nice-to-Haves