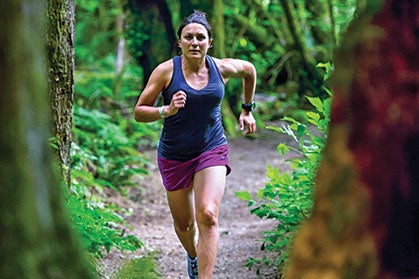 A few years ago, Canadian endurance athlete Jen Segger, then 31, was standing in her Hong Kong hotel room shortly before the start of the Vibram Hong Kong 100 Ultra Trail Race, desperately trying to pull on a pair of spandex shorts that suddenly seemed two sizes too small.

“I called my mom crying my eyes out because something was wrong, but I had no idea what it was,” she says.

Eventually squeezing her puffy body into her run kit, she slogged through the race with heavy-feeling limbs, but finishing far short of her competitive expectations.

That feeling wasn’t unlike what champion ultrarunner Duncan Callahan, 32, of Gunnison, Colorado, experienced in spring 2013, when he was unable to find that “extra gear” at Colorado’s Collegiate Peaks 50-miler to nab the win. He still finished second, though the effort left him “destroyed” for weeks afterward. Callahan figured he was simply overtrained and needed rest.

“For years, I would go through intense low points and peaks and thought it was normal,” says Callahan, who had long practiced high-volume training months in preparation for racing 100-milers.

But this time was different.

Both Segger and Callahan were eventually diagnosed with adrenal fatigue, a hard-to-determine condition in which the adrenal glands do not function normally, usually attributed to prolonged stress.

Overtraining broadly describes running-performance decline as a result of running at such high intensity or frequency that the body is unable to recover between workouts. With this condition, cutting back on training and getting extra rest normalizes things over time.

If left unchecked, overtraining can worsen into Overtraining Syndrome, a condition associated with adrenal insufficiency, which is when the glands’ ability to produce vital hormones starts to diminish. This is what sets the stage for adrenal fatigue.

Usually, it takes more than too much training to cause adrenal fatigue. Rather, it’s the accumulation of stress from many areas of life that chronically over-stimulates the adrenals and other glands, leading to their gradual malfunction.

“I had no capacity to handle any more stimuli,” says Callahan. “I couldn’t wake up with my alarm and coffee had no effect. I felt so wretched that I was taking 90-minute naps on my office floor each afternoon.”

At first, Segger thought her problem was a classic case of too much training, especially since, as a sponsored athlete and fitness trainer, endurance sports were her life.

“I came to realize that whenever I stressed my body—either physically from training or mentally from work—it was in such a delicate state that I’d just retain water,” she says.

“Adrenal fatigue is a syndrome that usually results from chronic stress,” says Fawne Hansen, co-author of The Adrenal Fatigue Solution. “Fatigue is the major symptom, but patients may also experience insomnia, food cravings, headaches, dizziness, feelings of being overwhelmed and more.”

And it renders high-quality training impossible.

The adrenal glands rest atop the kidneys and manage the release of several hormones and neurotransmitters that play a key role in stress management, immunity, metabolism and other essential functions.

Whenever the adrenal glands are stimulated, they excrete hormones including cortisol, adrenaline and testosterone, which play a role in increasing heart rate and blood pressure, slowing digestion and shutting down executive brain functions, among other physiological changes collectively known as the stress response.

This response is designed to prepare the body for “fight or flight” by giving you the short-term advantage of being slightly stronger, more alert and prepared for action.

Normally, when the threat (stress trigger) goes away, the body resets itself by re-balancing hormones and re-activating bodily systems that were diminished during the stress response.

The problem is when the body stays in fight-or-flight mode all day, day after day. Eventually, the adrenal glands’ hormonal response decreases and fatigue sets in.

Running is just one thing that can cause the stress response. The body doesn’t differentiate between training stress and the stress of a crisis at work, an argument with your spouse or other emotional upheaval. In every case, the same biochemical changes are set in motion.

For this reason, it’s critical for runners to be aware of their total stress load. As Segger and Callahan learned the hard way, when the stress load becomes too great, the body is no longer able to make fitness-building adaptations.

“As an ultrarunner, I was conditioned to believe my fatigue was just a low point I could mentally overcome,” says Callahan. “However, by continuing to push myself, I just dug a deeper hole.”

For weeks following a half-marathon last fall, Alex felt a lingering fatigue she couldn’t shake. “I ignored it, thinking it was normal to be tired because the race course had been hilly,” she says.

While continuing to train for her next race, Alex developed a severe case of tibialis tendonitis. Eventually, the pain was so bad she couldn’t walk.

When chronically stressed, the body’s natural healing mechanisms are unable to do their job. Instead of repairing muscle micro-tears and making them stronger, the body becomes more broken down with each workout. Which is why Alex was unable to get fitter and, instead, grew more tired and injured.

While you can’t train your way out of adrenal fatigue, it is possible to overcome it with lifestyle and training alterations (see sidebar, pg. 63).

The length of recovery depends on how severely your adrenals are compromised, as well as how disciplined you are in your recovery. It may be a matter of months, or even years. A premature return to racing can lead to a major setback and may add months to your recovery. Two years after his diagnosis, Callahan is back to racing, though cautiously, because he’s still not at 100 percent.

Segger credits her full recovery to four months of dedicated rest. She was even able to get pregnant during that time, something doctors had told her was not possible.

“Ending the constant stimulation of your adrenal glands allows them to recover from their depleted state,” says Hansen.

The solution lies in planning training around recovery

In 1900, Americans slept an average of nine hours a night. Now, they average 6.1 hours, which was Duncan’s typical shuteye at the time of his diagnosis and below the recommended range of seven to nine hours.

The majority of post-exercise repair processes at the cellular level take place during sleep. Hormones are rebalanced and healing mechanisms begin repairing exercise-damaged muscles, inflamed joints and the cardiovascular system.

“Energy is stored as glycogen in the muscles and during exercise that glycogen is used up,” says Marcey Robinson, R.D., an exercise and sport nutritionist. “But your body also needs glycogen during recovery to rebuild muscles. So if you don’t eat enough calories, especially after training, these repair process are severely compromised.”

“Real” foods are more effective than processed foods, formulated sports drinks, sugary energy foods or supplements in aiding recovery. Says Robinson, “Fruits and vegetables in particular contain the water, fiber, macronutrients and micronutrients you need, all in one package.”

Runners with adrenal fatigue should cut out foods that cause digestive problems or metabolic distress. For Segger, this meant no more dairy and gluten.

Because the body responds to all stressors the same, managing your emotional stress is just as important as managing training stress.

For a long time, Segger didn’t realize how her crazy schedule contributed to her physical symptoms. “I had a full calendar of events, lots of travel and goals to reach,” she says. “Every day I went hard from 6 a.m. to 11 p.m.”

Reducing your workload and obligations, and setting boundaries, can ease the situation. However, the most effective solution involves changing your emotional reactions, which can be done by regularly engaging in activities that elicit a relaxation response, such as meditating, playing music, reading, enjoying a hobby and spending time with close friends.

4. Say no to stimulants.

As if coffee, sugar and cola weren’t enticing enough, adrenal fatigue makes you crave stimulants even more, though with little or no ergogenic effect.

“When you’re healthy, caffeine can boost your short-term performance,” says Hansen. “But when you have adrenal fatigue, that effect is diminished, making you feel heavier and more tired.”

Callahan kicked his long-time habit of drinking up to 80 ounces of coffee every day; that change, he says, was critical to his recovery.

Most runners train too hard, too often. Even if you don’t do speed work or hill repeats, it’s possible that your everyday training pace is counter productive.

Eighty percent of your total mileage should be at an “easy” pace. The best way to stay within that “easy” effort level is to regulate your pace by perceived exertion, making heart-rate training zones and pace-per-mile irrelevant. What feels “easy” one day can feel “hard” the next, depending on what else is going on in your life.

Injuries, low motivation, disrupted sleep and cumulative fatigue are early warning signs that a runner is at the very least overtraining, and may be at risk for a serious stress-related condition like adrenal fatigue. By paying attention to biofeedback from their bodies, runners can better manage their training and life stressors.

“My condition started improving when I stopped listening to other people’s advice and started listening to myself,” says Alex. “Now, when I feel fatigued or too sore to run, I ask myself, ‘Will this run benefit me or work against me?’ As it turns out, the more rest and recovery I get, the more miles I can run.”

“Running mileage used to be my primary training metric,” says Callahan. “Now it’s how many hours I sleep.”

Elinor Fish is a mindful-running coach and author of The Healthy Runner’s Manifesto. Check out her online courses, workshops and international retreats at www.ElinorFish.com. This article originally appeared in our July 2015 issue.

Men, Are You Eating Enough to Fuel Your Exercise?

The Complex Connection Between Overreaching and Low Energy Availability