How to treat and prevent tick bites


This spring’s unseasonably warm weather across the United States … 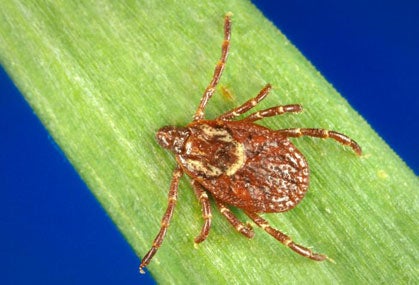 This spring’s unseasonably warm weather across the United States has been a boon for trail running and … the tick population.

You’ve probably plucked these creepy crawlers off your shoe or pried them—sometimes en masse—off your legs after cutting through bushes or tall grass. You may have even found them embedded in your armpit or behind your ear hours after you’ve run and showered. Unfortunately, the risk posed by these blood-sucking parasites runs deeper than giving you the creeps and an itchy bite: they can host and transmit a number of nasty illnesses.

Says Dr. Bobbi Pritt, an expert in clinical pathology at the Mayo Clinic in Rochester, Minnesota, “We have already started detecting multiple cases of tick-borne illness around the U.S. including Lyme disease, babesiosis and anaplasmosis.”

Case study
Tick-borne illnesses can put a major cramp in your running, something elite trail runner Dusty Olson of Duluth, Minnesota, knows too well. He located and removed a tick from himself during a run in July 2010 and began feeling soreness in his neck and heaviness in his ankles a few weeks later.

“Then I was running the Voyageur [50-Mile in Carlton, Minnesota] and started getting goose bumps. Pictures of me during the race showed that my skin was red-tinted,” says Olson. “The morning after a race I can usually move around fine or even go for a run, but this time I could barely lift my feet off the ground.”

Olson came down with a 102-degree fever that lasted several weeks. Despite initial doctor’s visits yielding no answers, his condition worsened: his left hand swelled, pain in his lower spine rendered him unable to bend over and he was unable to work. Finally, he visited a different doctor who diagnosed him with Lyme disease and prescribed antibiotics.

“I ended up seeing six different doctors and didn’t come off of antibiotics until June 2011,” he says. “And I still have some lingering symptoms.” 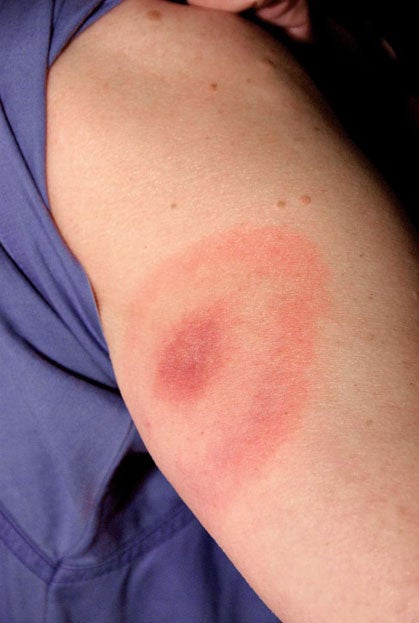 Detecting Lyme disease
Dr. Pritt says early detection and treatment is key to managing symptoms. “Lyme disease can be effectively treated with an antibiotic, but untreated disease can progress to joint pain, arthritis, facial paralysis on one side of the face, other nervous system problems and chronic problems with fatigue,” she says. “It is critical to recognize and treat disease as early as possible.”

One tell-tale symptom of Lyme disease is a large, red “bulls-eye” type rash surrounding the area of the infecting bite, according to Dr. Pritt, though this does not occur in all cases. Fever, chills, headache and joint pain can also indicate an infection. A blood test can confirm whether you have Lyme disease.

Other tick-borne illnesses
While Lyme disease is mostly restricted to northeast, mid-Atlantic and upper-Midwest states, it is not the only illness that ticks can transmit. Rocky Mountain spotted fever (RMSF) is a rarer but potentially life-threatening infection that can be contracted—contrary to the name—in most parts of the United States, especially southeastern states. Symptoms of RMSF include headache, fever, muscle pain and vomiting.

Babesiosis can cause severe anemia and other circulatory complications and is often asymptomatic, though in some cases flu-like symptoms (fever, fatigue, muscle aches) develop. It is most common in the northeast and upper Midwest, as is anaplasmosis, another potentially fatal infection that is preceded by flu-like symptoms and (in rare cases) a rash. Ehrlichiosis is the name ascribed to several bacterial infections transmitted by ticks that also causes flu-like symptoms.

Tularemia is a bacterial infection transmitted by flies as well as ticks that can cause open ulcers at the site of a bite, and southern tick-associated rash illness (STARI) can cause a rash similar to that caused by Lyme disease, and is often accompanied by fever, headache and muscle pains.

Tick types
It can also help to know which types of ticks can transmit disease. Lyme disease, babesiosis and anaplasmosis are all transmitted by blacklegged ticks, also known as deer ticks; these ticks are smaller and lighter in color (tan) than wood ticks, the larger, dark-brown creatures you are probably more used to picking off your clothing.

Wood ticks aren’t disease free, though: also known as the American dog tick (east of the Rocky Mountains) or the Rocky Mountain wood tick (in the Rockies), they can carry and transmit RMSF and tularemia. RMSF can also be transmitted by the brown dog tick, which is slightly smaller than the American dog tick. The brown dog tick can also complete its entire life cycle indoors, meaning RMSF cases are not isolated to warm months. Tularemia, STARI and ehrlichiosis are transmitted by the lone-star tick, identifiable by the white spot in the middle of its abdomen. 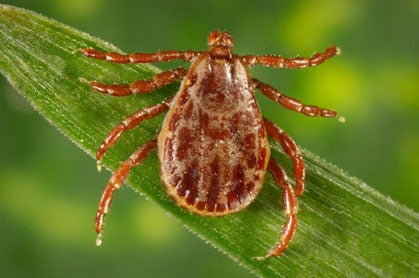 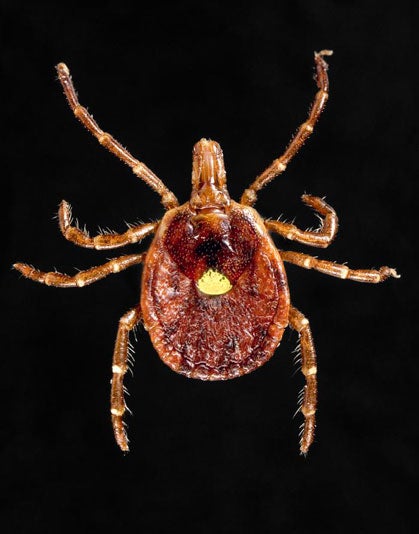 Photo by James Gathan – Lonestar Tick
Prevention
The best way to prevent tick bites is to cover your feet and legs, according to Dr. Pritt. But since trail runners usually prefer to don shorts in warmer months, she says you can minimize your chances of infection by staying on well-trodden paths, avoiding tall grass and bushes, and applying a DEET-containing insect repellent to exposed areas. Clothing that is pre-treated with repellant is also available from companies such as BugsAway, and it usually remains effective through multiple washings.

If you run in an area where ticks might be present, check yourself thoroughly, keeping in mind that ticks are often attracted to warm, dark places—no crevice is out of the question, unfortunately. If you find one, remove it. If it is already biting you, simply pulling the tick off may leave its head embedded, increasing your risk of contracting an illness. Use a tweezers to remove the entire tick, or see a doctor if you are unable to.