While it’s been around for years, Kinesio tape made center stage at this year’s London Olympics …

While it’s been around for years, Kinesio tape made center stage at this year’s London Olympics, with high-profile athletes across many sports, from beach volleyball (Kerri Walsh) to tennis (Serena Williams) to track and field (Trey Hardee), sporting colorful spider webs on shoulders, legs, backs, arms … buttocks, stomachs … ears! And, now, you can’t go to a trail race and not see at least a few fellow racers striped with the stuff. 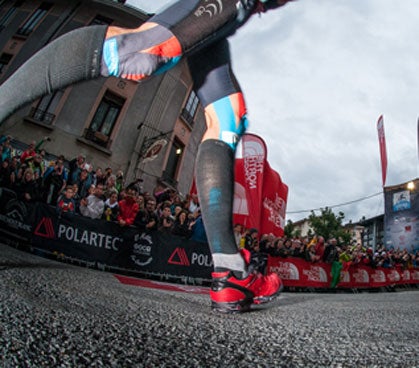 “I use Rocktape. It’s wonderful,” says elite trail runner Anna Frost of New Zealand. “It feels like my muscles are being hugged. It gives me instant pain relief to pain, increasing circulation to the area. It is also helpful for injury prevention and recovery. And the structures feel held in place; if you have weak ankles, it is great for extra support on technical terrain.”

Developed in the late 1970s by a Japanese chiropractor, Dr. Kenzo Kase, kinesiology taping is touted to “re-educate the neuromuscular system, reduce pain and inflammation, enhance performance, prevent injury and promote good circulation and healing, and assist in returning the body to homeostasis,” according to the Kinesio Taping Association International (KTAI) website. Along with his Kinesio Taping Method (KTM), Kase also developed the first elastic therapeutic tape, called Kinesio Tex Tape, still a leader in the marketplace—which has burgeoned to include many competing brands, e.g. KT Tape, Rocktape, etc. As well, Kase formed KTAI, which also sets the standards for becoming a Certified Kinesio Taping Practicitioner. Officialese aside, most folks tape themselves; there are plenty of online tutorials on the topic.

Kinesio tape is comprised of porous, breathable cotton/synthetic, latex-free material with a water-resistant acrylic adhesive, and is about the thickness and stretchiness of actual skin. The heat-activated (through pressing and friction) glue can stick for up to four or five days. Part of the scientific theory postulates that the taping lifts the layer of skin and tissue over a muscle, increasing lymphatic drainage and blood flow.

With the world’s top athletes slapping on stretchy tape like it’s EPO in a roll, you would think the stuff has been stretched to the test in clinical studies, right? Wrong. While there have been small studies supporting its effectiveness, no definitive large-scale, statistical studies have confirmed its efficacy. So … what’s the big buzz?

Many experts, unconvinced by the scientific evidence, cite the not-insignificant placebo effect as perhaps Kinesio taping’s biggest benefit. Other reasons for its use can be more superficial, like peer competitiveness (i.e. if so and so is performing well with it, maybe I should be using it too), or as a fashion statement or a mind-settling ritual. As to fashion, witness German volleyball player Katrin Holtwick’s aquamarine-colored tape fan covering her six-pack abs and exiting her bikini bottoms in London, an eye-catching look to be sure.

But many athletes, medical experts and physiotherapists swear that Kinesio taping simply works—i.e. results do the talking—and claim that the scientific evidence has not caught up. Some experts also say it is difficult to pin down taping’s effectiveness due to simultaneous, overlapping therapies, such as icing, NSAIDS, acupuncture, massage, etc.

“Kinesio tape was incredible in helping me through a terrible bout of PF [plantar fasciitis],” says long-time, accomplished ultrarunner Andy Jones-Wilkins. “Daily taping of my heel and arch provided excellent support for the damaged tissues while they were healing, and it allowed me to return to running more quickly than I probably could have without it. Now, I use it as a preventative aid for occasional training sessions, or when I am feeling unusually tired. For me, it is well worth the expense!” (Regarding price, for example, Rocktape goes for about 20 bucks per two-inch-by-16.4-foot roll.)

On the contrary, says Dr. John McCall, an orthopedic surgeon in Collingwood, Ontario, who has worked with the Canadian speed-skating team, “Taping has been around for hundreds of years. It’s a bit like acupuncture, mostly bullshit, but I’m not against it. If it works, that’s OK. Usain Bolt doesn’t need it!”

5 Body Parts You Shouldn’t Use A Massage Gun On