Fanselow was rushed to the local ER, hooked up to an electrocardiogram and soon diagnosed with AFL … 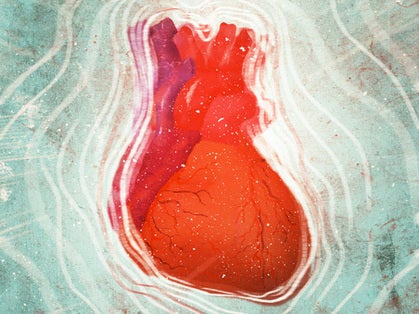 Last March, accomplished trail runner Bill Fanselow, 43, of Golden, Colorado, stepped off a treadmill after a routine, two-hour tempo run in preparation for his first 50-mile trail race, slated for May. Minutes later he began to feel unusually fatigued, even after sitting downresting for a few minutes. Twenty minutes later, he felt his heart still racing. Checking his pulse, he counted a rate of approximately 140 beats per minute (bpm) and thought the listless rhythm felt strange.

“I thought I had major dehydration and/or electrolyte imbalance so I skipped the shower and drove home, chugging energy drink the whole way,” says Fanselow. “At home I checked my pulse several times again, and it still hadn’t dropped at all!”

With his wife driving and young son in tow, Fanselow was rushed to the local ER, hooked up to an electrocardiogram and soon diagnosed with atrial flutter (AFL), an atrial arrhythmia characterized by very fast, anomalous pacing of the atria, upwards of 350 atrial beats per minute. In other words, Fanselow’s heart was under unnecessary stress because his normal pacemaker was being silenced by an irregular pacer. Luckily his ventricular rate of 140 bpm was much slower, a heart safety mechanism, than the quivering atria.

Three hours after his workout, Fanselow’s atrial arrhythmia returned to normal without intervention, a common occurrence in younger, fit individuals. The main consequence of his ER visit was being prescribed a daily dose of baby aspirin to decrease the likelihood of throwing a clot and causing a stroke, should the AFL occur again.

What is atrial flutter?

The following week, Fanselow walked into the office of Dr. Sameer Oza, a cardiologist with a specialty in electrophysiology at Rocky Mountain Cardiology P.C. in Boulder, Colorado.

“Over the past five years in Boulder, I’ve seen atrial flutter about one time per month in athletes, who have engaged in hard endurance training for decades and now are 40-plus years old,” says Dr. Oza. “Usually atrial flutter is seen in much older adults who have risk factors such as high blood pressure and preexisting heart abnormalities.” Also, according to Dr. Oza, very rarely saw atrial flutter in fit 40-plus year olds when he practiced in Buffalo, New York, a less physically active region.

Dr. Oza is seeing more endurance athletes (mostly males) over 40 with athlete’s heart or larger-than-normal chambers (e.g. atria), and it could be that this condition is predisposing some individuals, such as Fanselow, to early onset AFL.

“Strains on the heart occur with chronic, hard endurance training, especially at high altitude,” observes Dr. Oza, “and atrial enlargement may be one outcome.”

“This was such a bizarre concept to me—that all this supposedly `healthy’ exercise was actually detrimental to my heart,” says Fanselow. “To this day, I still have trouble getting used to it.”

Why is AFL a bad thing?

If you experience AFL during a race or training run, the arrhythmia could degrade into a more serious condition, such as ventricular fibrillation, a lethal situation. Furthermore, running with AFL may compromise an athlete’s ability to pump blood to working muscle and induce undue fatigue.

At all costs, if your heart rhythm suddenly feels funny and you become unusually fatigued, stop exercise or exertion immediately and see or contact your physician, unless you feel an ER visit is warranted.

Yes. Treatment is normally radiofrequency ablation (i.e. destruction) of the irritable area of the atrium giving off the pesky, rapid beats. The ablation procedure involves shoving catheters through both femoral (groin) veins and into the right atrium, then using specialized probes inserted through the catheters to ablate the petulant tissue. The procedure, which can take up to five hours, has over a 90-percent success rate. Eighty to 90 percent of patients opt for the ablation over drug therapy, the latter of which may become chronic and have side effects, according to Dr. Oza.

“Reoccurrence of atrial flutter is not common post ablation,” says Dr. Oza. “However, a patient is always at risk for atrial fibrillation, a higher-rate atrial arrhythmia, because of risk factors that are still present after the atrial flutter is treated.”

In other words, in the case of Fanselow, who was still contemplating ablation after a second AFL episode in July, right after winning Colorado’s North Fork 50-miler, he may be at risk for atrial fibrillation post treatment for AFL. Of note, Fanselow completed the Collegiate Peaks 50-mile race in Buena Vista, Colorado, in May (his first ultra marathon) with no arrhythmia problems, finishing second overall, and continuing to train hard leading up to North Fork, where he realized the AFL was back and at a greater rate upon crossing the finish line. He ambled directly into the North Fork medical tent while remembering that he also felt oddly crappy the last five miles. Fortunately, the AFL again converted back to a normal rhythm without intervention, this time about one hour post run.

“A week later I was back in Dr. Oza’s office discussing the latest episode and my options. He was now very concerned about me continuing to run hard, given my propensity for flutter, and particularly my inability to detect its onset during intense exercise,” says Fanselow. Additionally, Fanselow had been wrestling with the notion and medical advice to stop hard endurance training altogether to decrease the likelihood of reoccurring AFL episodes.

Fanselow consulted with his wife and scheduled the AFL ablation procedure 17 days prior to his third 50-mile race, Run Rabbit Run in Steamboat Springs, Colorado, on September 18.

“Not only did the risks scare me, however small—I could end up on a pacemaker for the rest of my life—but it also seemed so strange to be doing this kind of intervention,” says Fanselow. “It was like my heart was trying desperately to tell me something, and I was just shoving a sock in its mouth and saying, `Shut up and keep working as hard as I need you to!’ In the end I felt that my love for hard running was just too much a part of my DNA, and I scheduled the procedure.”

The procedure was a success, and after seven days of no running post ablation, as per doctor’s orders, Fanselow resumed training. Ten days later at Run Rabbit Run, he finished a very strong second overall, in 7:22:57, behind ultramarathon wonder boy Geoff Roes, who set a new course record of 7:11:36.

“I had been given a second chance,” says Fanselow. “I watched my heart rate very carefully during the race—it beat like a Swiss clock the whole time.”

Because of a lack of large epidemiological research studies, the correlation between long-term endurance sports practice and the prevalence of AFL and atrial fibrillation remains to be elucidated.

From my own perspective as a 40-year-old endurance athlete, with 30 years of hard training under my belt, I may have to keep tabs on my heart rate, but the thought of no exercise or cutting back on my training leaves me breathless. It’s in our DNA, as Fanselow says, to seek out active lifestyles and challenge ourselves.

Running Nearly Killed Me, But Being a Runner Saved My Life