Can you get too much of a good thing? 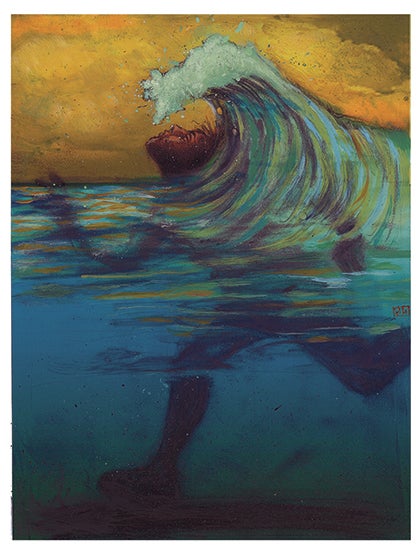 All 30-year-old Jenny Moran wanted was to get in better shape. And when she started trail running on a regular basis, that’s what happened. For the first time in her life, she felt in control of her weight. It was, she says, an amazing feeling.

But within a few years, things spiraled out of hand. Moran’s workouts became a fixation, looming large over other activities. At the peak of the obsession, she was even using her runs as a type of purge to “cancel out” whatever she had eaten that day

“Running consumed my thoughts,” Moran, now 42, says. “Every day I sat at work thinking about running. It was like a crazy voice in my head. That’s when I knew something was really wrong.”

Sports psychologists consider Moran’s condition a “running addiction,” an intense obsession that can impact physical health, stress levels, outside responsibilities and more. The problem, however, remains largely undiagnosed, in part because of the healthy image associated with the runner’s lifestyle. If someone is well enough to go out and run every day, how sick can they be?

“Runners will tell you that their sport is one of the great pleasures in life,” says Dr. Kevin Stone, a San Francisco-based orthopedic surgeon and sports-medicine specialist. “Any runner has some degree of healthy addiction; they like it, and so they keep running.”

The problem, he says, comes when running becomes their sole focus. People become obsessed with the endorphin rush of the “runner’s high” and over train, eventually leading to mental and physical exhaustion.

Dr. Michael Sachs, a Professor of Behavioral Sciences at Temple University, who has studied the psychology of running for more than 25 years, adds that factors ranging from body image to cabin fever can also contribute to an addiction.

“There’s a sense of mastery that goes along with addiction, of having that challenge and being able to run those distances,” says Sachs. The problem, he says, comes when a runner loses control over his habit, running more than what’s healthy and damaging his body in the process.

For Linda, who asked not to be identified for this story, it came down to personal identity.

“I had always been very athletic,” she says, “but I just fell in love with running. That’s what I am, a runner. So, when I got injured, I ignored it and kept on running.”

Linda stuck with it for nearly a year, in the process developing a case of Achilles tendinitis that still hasn’t responded to treatment. Now, after a career-ending injury and more than a year of rehab, she finally sees how obsessed she had become. For her, running was an escape, an activity that made her “feel alive like nothing else.” The down time has been a roller coaster ride of depression, panic and guilt.

“It’s been horrible,” she says. “Trying to find something to fill that void has been tough, but you have to keep your sanity. If you’re not a runner, what are you? I’m still a little lost.”

But that’s not to say that every dedicated runner on the trail is on the verge of a breakdown. Nancy Hobbs, an experienced runner and chair of the USA Track and Field Mountain/Ultra/Trail-Running Council, knows many healthy athletes who train hard.

“What’s right for one person isn’t always right for someone else,” she says. “I see runners who train eight hours on the weekend, but it goes in waves.”

Are they overdoing it? Dr. Sachs estimates that less than five percent of the running population qualifies as addicted under his “restrictive definition:” a fixation so strong that it completely dominates the athlete’s life. Even so, more than a few runners knowingly straddle the line between control and addiction.

How do you know if you are pushing past the line? Just examine the symptoms: are you missing out on responsibilities, dealing with injuries that won’t go away, feeling constantly tired or interested in little else but running? Truly addicted runners will literally sacrifice everything else in their life in order to get in their workouts, with no regard for the toll it takes on their families or themselves.

“We all know somebody who fits the description in some way,” Dr. Sachs says, “but a lot of individuals who love running do it intensely and keep it in perspective. There are few real addicts, but enough that we should be aware.”

Sachs admits that not everyone responds to intervention—some people just have to fix things for themselves. But let them know that you’re concerned, he advises.

“The person may not realize what they are doing,” says Sachs. “They should take some time off, or do something more restful.” Beyond that, he says, individual therapy or other treatment may be necessary to get to the bottom of what’s causing the addictive behavior.

Stone agrees, adding that variety in training is key. “Great athletes are versatile athletes,” he says. “Those with the most varied workouts are less likely to get hooked on one thing.”

Of course, try focusing on that the next time you look out the window and see the blue sky of a beautiful trail-running day. True addiction may be rare, but every runner knows how easy it is for the sport to get under your skin. Personal success is all about control and knowing how much you can handle.

As for Moran, she has scaled back her workouts and regained control of her life, but hasn’t forgotten what it feels like to be trapped in her sport.

“I think that running has given me lots of positive things,” she says, “but I also think that it’s an easy place to hide out if you have a problem; it can be hard to imagine the negative side of it.”

Do you attempt to run through injuries? Overuse injuries are common with running addiction and can range from calf pulls to ankle sprains. The good news? Nagging injuries will eventually drag down performance, a situation that no runner can ignore.

Are you neglecting responsibilities? Yes, it takes some creativity to schedule a consistent running regimen. But when choosing your workout over appointments or family, it’s a bad sign.

Are you tired all the time? Listen to your body. General fatigue is its way of announcing that you’re overextended. And all that single-minded focus can lead to trouble  in the concentration department.

Do you have a one-track mind? Interesting anecdotes are one thing, but no one wants to talk race splits and stretches all the time. When it seems to be all that you’re talking about, it’s probably all that you’re thinking about.

Treating Addiction: what’s the next step?

Talk it over: According to Dr. Sachs, most runners don’t even realize that they have a problem. Just expressing your concerns can go a long way toward helping.

Slow things down: Exercise addiction’s real danger is that the runner will do too much, too fast, and seriously injure themselves. The experts all agree that rest days and cross training are important parts of a healthy workout program.

Medical treatment: Have a doctor assess the situation to put a stop to the mental and physical damage before it goes too far.

Therapy: Like any addiction, compulsive running may be tied to some other root cause. Therapy can be an effective way to help a runner understand and overcome his or her problem.

This article originally appeared in our May 2006 issue.