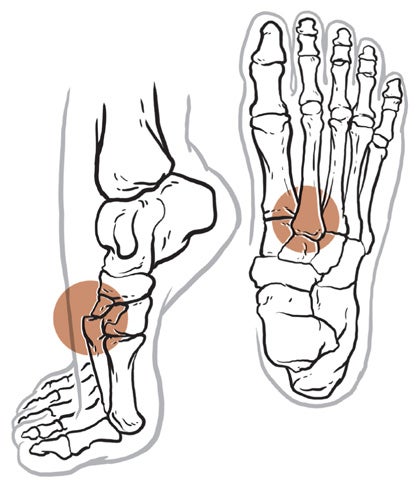 Like the tires on your car, your feet are your direct connection to the dirt, rocks and roots—and they take a beating. As a result, foot injuries are common among trail runners. Below is a quick reference guide to five run-stopping injuries, by the Rock ‘N’ Roll Marathon’s Medical Director.

Although the press regularly writes about Lisfranc season-ending injuries in professional football, runners get these injuries as well. Lisfranc foot injuries occur in the mid-foot. They’re named after French surgeon Jacques Lisfranc de St. Martin, who in the 1800s, as a member of Napoleon’s army, first described an injury sustained by mounted soldiers whose foot got caught in the saddle’s stirrup as they were thrown from the horse.

Nowadays, the injury happens when stepping into a hole in the trail, twisting the foot on uneven terrain or pushing off roots or rocks with force as a football lineman might do. These injuries can be ligament sprains, dislocations of the joints between the forefoot and mid-foot or fractures of the bones in the mid-foot complex.

Anatomically, the Lisfranc joints are between the tarsometatarsal joints involving the cuneiform bone and metatarsal bones, as shown in the illustration. Only a small percentage of Lisfranc injuries are fractures or dislocations; most are sprains involving the ligaments.

After feeling the foot and twisting the mid-foot (which would cause more pain if injured) and checking the pulse on top of the foot (because the artery there can sometimes be injured, too), a doctor will generally order standing and non-weight-bearing X-rays. However, Lisfranc injuries that are not fractures or dislocations will not be seen on X-ray. An MRI will then be ordered to check for a ligament sprain; the doctor will also look for bone-marrow edema (fluid within the bone marrow) indicative of stress injury or stress fracture.

Treatment varies depending on whether the injury is a sprain or a fracture. A sprain will usually be treated in a cast or removable, non-weight-bearing cast boot (meaning that you cannot walk on the cast and will have to use crutches) for about six weeks. After removal, physical therapy and a gradual return to the trails usually takes eight to 12 weeks. Fractures and dislocations will require surgery with wires and/or screws to properly align the bones. The cast and non-weight-bearing post-surgery will last about six weeks, followed by another six to eight weeks in a walking cast or cast boot. After that, you will need physical therapy for another eight to 12 weeks before getting back to running.

Symptoms: Pain in the mid-foot.

How it occurred: Stepping in a hole, twisting the foot or pushing off with force.

What the doctor may do: Complete medical history. Palpate the area. X-ray. MRI.

Likely treatment: If injury is a sprain, physical therapy. Platelet-Rich Plasma (PRP) injection has shown some promise in speeding healing. If injury is a fracture or dislocation, may require surgery. Cast or cast boot (non-weight-bearing), six weeks. Exogen bone stimulation. PRP injection for a fracture is still experimental but shows promise. 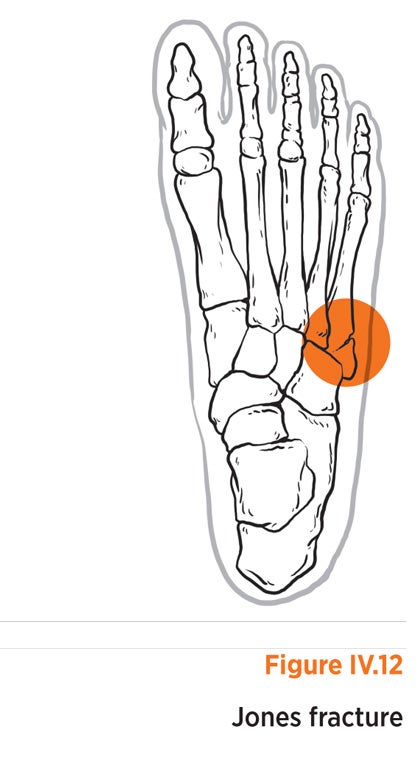 Sometimes, overpronators land very hard on the outside of their foot before rolling inward. They are what I call “forefoot floppers.” Don’t try to look that up because it is merely my own term for this heavy landing that puts strain and stress on the fifth metatarsal bone (the bone behind your small toe bone). When making orthotics for this condition, I place a lateral piece of material on the orthotic to cushion and redirect the landing to take stress off that bone.

Fractures that result from stress usually end up in the proximal end of the fifth metatarsal: the Jones fracture (first described in 1902 by a Welsh orthopedic surgeon, Sir Robert Jones, who sustained this injury while dancing). Because blood flow is irregular in this area, the bones sometimes need a surgically placed screw to allow them to properly heal. Without the operation, you risk a “nonunion” and further surgeries and layoffs may be recommended.

If you feel pain in training, you may be stressing the bone. Instead of ignoring the discomfort, see a sports doc immediately. The stress can easily be prevented by a simple adjustment of your orthotic.

Symptoms: Pain along outer side of foot on the bone (fifth metatarsal).

How it occurred: Overpronator slamming outside of foot on ground over time. Not enough correction by orthotic. Not enough cushion in shoe.

What the doctor may do: Palpate area. Gait analysis. X-ray. If X-ray is negative, MRI to look for stress syndrome or stress fracture.

Likely treatment: Orthotic or orthotic adjustment with extra cushion on lateral side. Cushioned shoes. Exogen bone stimulation. No running for six to eight weeks. If bone is broken all the way through, surgery will probably be necessary. 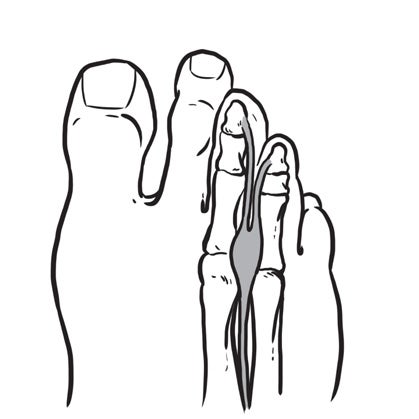 In 1927, a physician named Dudley Joy Morton first described a foot where the second toe is longer than the big toe. Most folks have it the other way around, but 30 percent of the population has the foot Morton described. Actually, people with Morton’s foot have a normal-size big toe but a shorter first metatarsal than usual, and therefore the big toe starts farther back.

This is important for runners because we get our power to move forward off the base of that first metatarsal. Because the Morton’s metatarsal is shorter, the foot is prone to overpronation and thereby stresses the bone. The overpronation can also inflame a nerve that lies between the second and third metatarsals; inflammation of the nerve is called neuroma.

Orthotics can help both conditions by reducing the stress. They must run the full length of the foot and be flexible. The neuroma may need a cortisone injection. Rarely, surgeons remove the nerve if it remains painful; note, however, that with removal goes the ability to feel what your foot is doing. I have never had a case where proper orthotic control and injection did not make the neuroma pain go away, so in my experience, surgery is unnecessary.

Symptoms: Inflammation and pain between third and fourth toes.

What the doctor may do: Physical examination. Gait analysis.

Overpronation can cause stress on the other metatarsal bones (the Jones Fracture described above affects only the fifth metatarsal). Early recognition of discomfort and subsequent adjustment with an orthotic can prevent a full-blown metatarsal stress fracture and an eight- to 12-week layoff. Water-running therapy (jogging in water deep enough that your feet don’t touch the bottom; also called “aqua therapy”) during the healing process is not as fun as being on the trails, so early attention to any metatarsal distress is important.

If you do have a stress fracture, all weight-bearing exercise—including cycling—must cease. You may be given an Exogen bone stimulator; you won’t feel the current from the bone stimulator which in certain cases can accelerate the healing process considerably.

What the doctor may do: Palpate area. Gait analysis. X-ray. MRI. 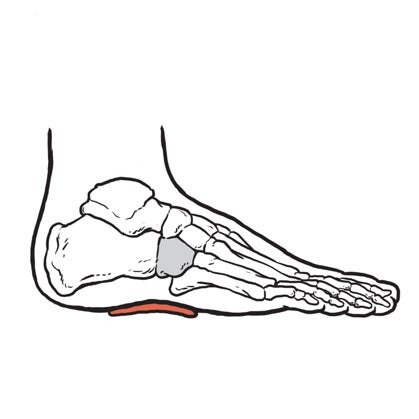 Cuboid syndrome is a subluxation (partial dislocation) of the cuboid bone in the foot. The cuboid bone essentially moves out of place due to ligaments weakened from repetitive inversion (the foot repeatedly turning inward while running).

The pain is directly under the arch. It mimics plantar fasciitis but does not go away with standard treatments. X-rays and MRIs are usually not helpful because they will appear normal. An examination revealing tenderness on this bone makes the diagnosis. Treatment is conservative, normally involving manipulation and then strapping with tape and/or employing an orthotic with a cuboid pad to hold the bone in place as the ligaments heal. Maximum downtime is six weeks; if a runner is in a hurry, I have seen Platelet-Rich Plasma (PRP) injected into the ligaments to speed healing while the runner wears the strap or orthotic.

In 2009, pro-football quarterback Eli Manning was reported to have a different cuboid condition. News outlets reported that he had a “stress syndrome” of his cuboid bone. Here, the bone becomes stressed from repetitive inversion, and the condition, if not corrected, will lead to a stress fracture. The pain is exactly the same as that of plantar fasciitis, but there is usually less or no pain with palpation of the bone. This is not ligamentous and is easily seen on an MRI. Rest, an orthotic to protect from more inversion and a bone stimulator are useful in healing and preventing a stress fracture. Recovery time varies with the severity, and all bets are off for a quick fix if the syndrome becomes a stress fracture.

Symptoms: Pain in arch, which mimics plantar fasciitis, but pain not usually seen with first step in the morning.

How it occurred: Repetitive inversion.

What the doctor may do: Physical exam. Palpation. Manipulation during physical exam should show relief of pain. Gait analysis.

Likely treatment: Cuboid pad and no running for six weeks. Repeat manipulation of bone back into place weekly. Orthotic or orthotic adjustment. Platelet-Rich Plasma (PRP) speeds healing of the ligament.

Can I Still Run After Knee Replacement Surgery?

The Science About Tending to Tendon Health