A trail runner’s guide to tick and Lyme-disease safety 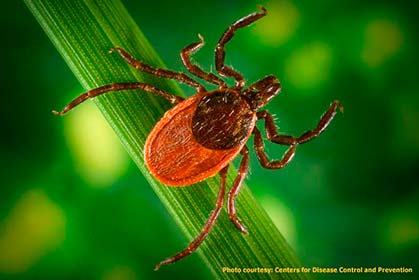 With summer almost underway, trail runners everywhere are excited to toss on a t-shirt and celebrate the sun and newly dry trails. But with the summer trail-running season come ticks, those pesky little arachnids that like to crawl into your socks and up your arms to feast on your blood. The bites are often benign, but can sometimes lead to infections like Lyme disease and Rocky Mountain spotted fever. So, despite their small size, ticks have developed a nightmarish reputation.

Ticks are nearly unavoidable if you plan on spending time in wooded or humid, warm environments, so Trail Runner spoke with Dr. Neeta Connally, a tick and Lyme-disease specialist at Western Connecticut State University, about what trail runners should know about the tiny insects—which species are potentially dangerous, which regions carry a higher risk of tick-borne illness, how to prevent tick bites and what to do if you’ve already been bitten.

From the time they are born, ticks depend on the blood of other animals to survive—namely, rodents and other mammals, like dogs, rabbits and deer. The tick feeds by inserting its tube-like mouth into the skin of its host. Tick saliva works as a mild local anesthetic, which is why bites can go unnoticed for long periods of time.

If a host has an infection in its blood, the tick ingests the pathogens along with its meal. When it feeds on its next host, it can transmit those pathogens through its saliva.

Use bug spray. Any bug spray with 20 to 30 percent DEET will function as a tick repellant. Spray on exposed skin, and over clothing.

Common repellants, and home remedies like eucalyptus oil, wear off quickly. For longer runs, keep a small bottle of bug spray in the pocket of your hydration pack, to reapply every couple of hours.

Dr. Connally suggests a chemical, toxic to ticks, called permethrin, available at most outdoor retailers in the form of a spray that stays on after several washings. Runners can also spray their running shoes and socks. The company Insect Shield will apply the chemical to your clothing for $8 per treatment.

Stay in the center of the trail. Avoid brushing against overhanging branches and weeds where ticks could be lurking. Don’t go off trail.

Check for ticks. In a study published in 2009, Dr. Connally found that people who checked for ticks within 36 hours of spending time outdoors were most likely to remain disease-free. Ticks’ favorite areas to feed are in the armpits, on the waistline and around the ears or scalp. Have someone check your hair, especially if it is long.

Bathe. In the same 2009 study, Dr. Connally found that people who bathed within two hours of returning home were less likely to sustain a tick bite. A shower will wash off ticks that have not attached to your skin.

Change into fresh clothes. Wash the clothes you ran in before you wear them again. 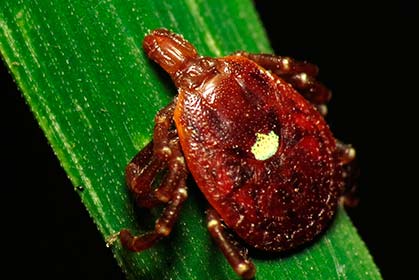 If you do find a tick after a run, here’s what to do.

>Using a pair of tweezers, or your fingers, grasp the tick as close to the skin as possible and pull straight out, without twisting or jerking, as that may cause the tick’s feeding tube to remain stuck in your skin.

>If the tick’s mouthpiece gets stuck in your skin, try to remove it. If it will not come out, leave it and let the skin grow over it.

>Do not attempt to crush the tick; that will release potentially diseased blood.

>Save the tick in a plastic bag and label it with the date you found it in case symptoms develop, suggests Dr. Connally. Otherwise, drown the tick in alcohol or flush it down the toilet.

>If a tick has attached itself to you, you may be at risk of infection. Watch for symptoms of illness: headaches, fevers or joint pain.

WHAT TO WATCH OUT FOR

The disease is characterized by its flu-like symptoms, and a trademark bull’s-eye rash that can occur far from the original bite. (The rash appears in about 70 to 80 percent of infections, according to the Centers for Disease Control and Prevention.) A bull’s-eye may also appear and then vanish, but this does not mean that the infection has disappeared.

Rocky Mountain spotted fever (RMSF). This infection pairs fever, vomiting, muscle and abdominal pain and headaches with an identifiable spotted skin rash. The primary culprits include the American dog tick, brown dog tick, Gulf Coast tick and Rocky Mountain wood tick. Though RMSF cases have been documented in nearly every state, it is most prevalent in the Southeast, lower Midwest and Rocky Mountain states.

Southern Tick-Associated Rash Illness (STARI). The lone star tick, identifiable by a white dot on its back, is the primary species known to transmit STARI, a condition similar to Lyme disease. The lone star tick is found in the southeastern and eastern United States.

Ehrlichiosis. This bacterial infection, similar to malaria, causes flu-like symptoms within one to two weeks of the initial tick bite. Doctors trace Ehrlichiosis back to the lone star tick.

Tularemia. Transmitted primarily by lone star ticks, Rocky Mountain wood ticks and American dog ticks feeding on rabbits and rodents, Tularemia often causes ulcers at the site of the bite. Other symptoms include fever and swollen lymph glands. The pneumonic form of the disease, considered the most serious, involves coughing, chest pain and difficulty breathing. The disease is most common the Rockies, the East Coast, the Southeast and parts of the Pacific Coast.

Anaplasmosis. Similar to Ehrlichiosis, Anaplasmosis causes flue-like symptoms such as fever, muscle ache and headache, which usually appear within one to two weeks of the bite. The infection is transmitted by the blacklegged tick and western blacklegged tick In the Eastern U.S. and parts of the Pacific coast.