Managing exercise-induced asthma on the trails 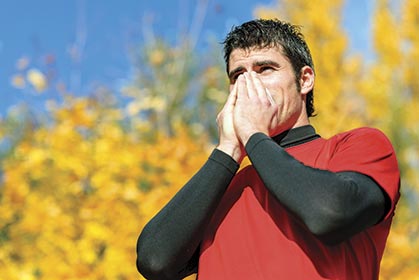 Trails offer a variety of treats for runners: clean air, fragrant grasses and honeysuckle vines, chirping wild birds and other wildlife. Unfortunately, for runners with exercise-induced asthma (EIA), the delight of running on trails can be quickly deflated by uncomfortable breathlessness, burning lungs, chest tightness, coughing or a feeling of being “out of shape” even when well-conditioned.

Says trail runner Allison Lerrario, “My cough is not major but it is annoying, sometimes embarrassing. I hate it.”

More extreme symptoms can include wheezing, chest discomfort and dizziness. As a 10-plus year sufferer of EIA, I recently was eight miles deep in the woods when I was overcome with fatigue, dizziness and the feeling that I couldn’t get enough oxygen. The inhaler I’d used was not helping. It was a struggle to remain calm and not panic on the return to my car.

A transient narrowing of lung airways during or after intense exercise, EIA affects 12 to 15 percent of the general population—though some research indicates even higher prevalence among athletes. In one study, 148 athletes with complaints of breathlessness on exertion underwent lung tests; of those, 52 percent were, in fact, experiencing airway narrowing.

According to the American Lung Association, asthma symptoms are generally experienced within five to 10 minutes of beginning a run, or can occur within minutes of ending. If you notice these symptoms when you run, ask your healthcare provider to perform lung-function testing to determine if asthma is the culprit.

Exercise-induced asthma symptoms occur more frequently in winter than in summer, and one leading theory suggests that cold entering the lungs triggers small airways to tighten or even close. Also, exercise forces runners to breathe through the mouth, which bypasses the warming effect of breathing through the nose.

Another theory suggests that airway constriction results from water loss in the airways, often caused by heating and humidifying large volumes of air during exertion. The immune system is also involved in this process, so irritants such as pollens, dust mites and pollutants (poor air quality) may also contribute.

Furthermore, running with a chest cold can trigger a severe asthma attack—a danger to consider if you are under the weather and running alone, particularly in a remote area.

In fact, abnormal lung physiology following a bad bout of bronchitis or pneumonia can affect sports performance for months and even years. New-onset asthma symptoms can begin later in life after an acute upper-respiratory infection and can last decades.

Next page: Tips for managing EIA

Over time, experienced runners with EIA learn their specific asthma triggers and adapt accordingly. Dr. Robert Houle, an Emergency Room MD with the Reading Health System, works with many Pennsylvania trail runners and advises, “With proper diagnosis and treatment, exercise-induced asthma should not be a barrier for trail runners.”

Once diagnosed with exercise-induced asthma, runners are generally prescribed an inhaler (such as Albuterol), both as a prevention tool and as a rescue medication when asthma symptoms occur.

However, daily use of inhalers can be associated with tolerance and thus decreased effectiveness. One odd side effect of Albuterol is that it can decrease potassium in the bloodstream, which has been associated with muscle weakness and even heart-rhythm problems.

If the idea of inhaling steroids or using inhalers regularly is unappealing, here are several alternative methods for helping manage EIA:

1. Warm up with a quick run. The point of the quick, warm-up run is to trigger an attack and, more or less, “get it out of the way,” so the chance of an attack during the actual run is diminished. Once airways have constricted and then relaxed, there is a “grace period” of a few hours in which asthma symptoms are less likely to re-occur.

2.Research at Indiana University demonstrated that vitamin-C supplements may help counter runner’s asthma: subjects who took 1,500 mg of vitamin C every day for two weeks cut their runner’s asthma symptoms in half.

4. A diet full of antioxidant-rich healthy fats, vegetables and fruits may be helpful, too. Antioxidants have important properties that may reduce inflammation in chronically irritated lungs.

5. Cold-weather runners may consider wearing a heat mask, balaclava or face gaiter to protect against bronchoconstriction triggered by inhalation of cold or dry air.

Asthma can be unpredictable. If you have a history of sudden onset of breathing problems, Dr. Houle advises to “always run with a cell phone and consider running with a partner. Runners should bring their rescue inhaler on every outing (and their running partner should know where it is). Medic alert bracelets indicating you have asthma can assist emergency personnel and quicken treatment.”

1. Having a parent or sibling with asthma

2. Participating in sports that make you breathe hard, such as running

4. Suffering hay fever or other allergies when running outdoors

5. Exposure to poor air quality such as pollution or high pollen