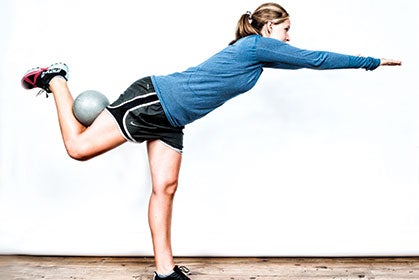 Runners are often weak in the hamstring and gluteal muscles, so it’s paramount to perform strengthening exercises.

Overall flexibility is often cited as the key to improving performance and preventing injury, but in light of recent research, you might want to dump your old stretching regimen in favor of a more balanced approach that maintains equal amounts of pull on both sides of a joint. Traditional stretching routines often over-stretch some muscles while neglecting flexibility in others. Many injuries are related to these muscle imbalances, combined with the repetitive stress of running.

With each footstrike, these muscles must stabilize the knees, ankles, pelvis, lower back and sacroiliac joints (which attach the legs to the torso). Otherwise, internal rotating of the joints, as well as hip drop, can cause uneven strain on the entire body. The glutes are the magic muscle for runners; large amounts of functional glute strength can prevent a slew of injuries up and down the body.

Weak muscles bear the same load as strong muscles, but have fewer fibers to support the strain. Those few fibers become damaged due to the load. By increasing the strength and number of fibers, you can decrease the load on each fiber by spreading it out over a greater amount of tissue.

STRETCH AND STRENGTHEN THE RIGHT MUSCLES

Quadriceps and hip flexors, though strong in most runners, need flexibility in order to have the proper range of motion for an efficient gait. Flexibility in these muscles allows the glutes to work properly and relieves pressure on the knees. Quadriceps are naturally stronger, more dominant muscles than hamstrings. The discrepancy intensifies when running further develops the quads, leading to extreme quad dominance.

Gluteal muscles and hamstrings propel the body forward, help control large muscle groups and stabilize the core when landing. They also absorb the impact and prevent the body from collapsing laterally. Most runners rarely employ lateral movement, and, hence, do not strengthen those important muscles, especially the abductors in the pelvis such as the gluteus medius (see sidebar).

The deep abdominal muscles of the transversus abdominis run horizontally and help support the lower back from the inside. To use this muscle, think about stapling your belly button to the inside of your lower back. Practice holding this position for longer and longer periods of time during the day, until the body unconsciously engages this muscle regularly. 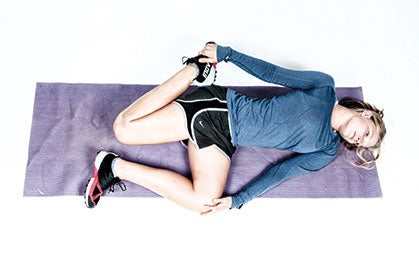 Stand on one leg with knee slightly bent.
Bend other leg up, holding a small exercise ball behind knee.
Lift chest toward the ceiling with arms above head.
Bend forward, keeping your raised thigh and torso in a straight line.
Squeeze the ball between heel and bottom in a pulsing motion for 10 seconds.
Repeat 10 to 15 times.
Can be done with lifted leg cocked out to the side to work on gluteus medius.