Trunk muscles—including your hips and glutes—are arguably the most important part of your running anatomy. Pay attention to them to prevent injury and stay strong 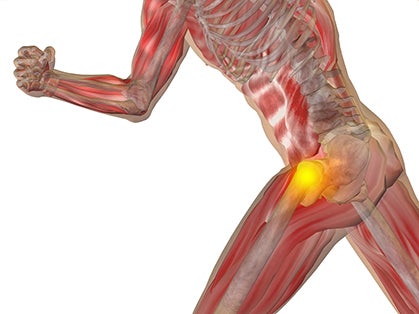 When it comes to running strong, efficiently and injury-free, it’s all in the hips. And butt.

Your gluteal complex—consisting of the maximus, minimus and medius muscles—work together to provide postural stability in walking, standing and running. They stabilize and align the hip, decelerate your swinging leg while running, and provide power in your footstrike and push-off.

In other words, your butt is the biggest muscle complex in your body, and its proper function is essential to efficient and injury-free running. It is meant to work harder and absorb more shock than any other spot in the body.

The problem is that runners often have weak glutes, leading to discomfort, inefficiency and—worst of all—injury.

Weakness in your glutes is related to a lack of “recruitment,” explains Toni Dauwalter, a Physical Therapist at Accelerated Sports Therapy and Fitness in Minneapolis. “Two big reasons for [glute weakness are] our sitting lifestyle and a history of back pain and injury,” she says. “There isn’t much need for core recruitment in the sitting position, especially the frequently adopted work position of forward head and shoulders and rounded spine.”

Though running on the uneven surfaces of your local trail could theoretically engage a higher variety of stabilizing muscles and help prevent these issues, Dauwalter says that’s not always the case.

“In reality, trail runners need a stronger core and pelvis,” she says. “These muscles have to be working hard to stabilize the trunk and hip in alignment so that down the chain, the foot and ankle have only to worry about nimbly skipping and hopping over rocks and woods.” She adds that the glute max is the key muscle for climbing hills and stepping over boulders.

Sometimes the equation goes beyond muscle strength and involves whether our nervous system can make those muscles – strong or not – contract (“fire”) when they need to.

As a former soccer player, sprinter and gymnast, Sally McRae, 35, of Aliso Viejo, California, had built an all-around strong machine before she turned to trail running. But the Nike Trail Elite team member says when she began running she struggled to “connect [her] brain to [her] butt.”

“Years back, I was shocked when my PT told me I not only had weak hips and glutes, but that I wasn’t ‘firing’ properly as I ran,” she says.

She largely ignored his comments and six months later incurred a serious IT band injury that left her unable to run for four months. “[The PT] explained that because my weaknesses were slight, I was able to get away with the shorter distance races without much of an issue,” she says. “But because I had jumped into ultramarathoning, the greater the distance, the more magnified my minor imbalances became.”

McRae says she learned the importance of “runner-specific” strength training in the wake of her injury; notably, she advocates lots of one-legged exercises, such as squats, since we are in a one-legged stance almost the entire time we are running.

While there are many varieties of strength training that can prove beneficial to runners, including explosive, circuit and traditional weight training, McRae and Dauwalter both recommend a handful of basic at-home glute and hip exercises that can help you mend from and/or prevent future injuries. For example:

With all of these exercises, focus on engaging your glute and hip muscles – otherwise you are training those muscles to stay complacent. Additional exercises (toe-straightening while lying face down, leaning forward on one leg until your forehead touches the wall) can improve key muscles’ connections to your brain and propensity to fire when called upon.

Perhaps the biggest challenge with ancillary exercises is not remembering to do them, but rather finding the time to. For one thing, if runners have an extra 15 minutes, we tend to prefer using them to fit in an extra mile or two.

But McRae says perspective is important, and that finding the time to fit these exercises in will probably improve your running (and your long-term injury prevention) more than an additional mile here or there will. “You [may] have to restructure your schedule to get the exercises in … [but] it is so worth it,” she says. “You’ll be better, stronger, and you’ll be able to run for many more years to come.”

“Ideally, doing these basic exercises just five minutes before heading out for a run will not only allow you to warm up a bit, but they will also remind you of which muscles you should be engaging while running; you’ll be more inclined to practice things like firing up through your butt and maintaining good form if you prep yourself in this way,” she continues. “I have become increasingly passionate about helping people learn not only how to move more but to work specific exercises into their everyday routine. I would love to see the current yearly percentage rate of injured runners decrease and the number of ‘strong’ runners increase.”

How to Build Hip Mobility Safely