Downhill running is an art. The chorus of a Tom Petty and the Heartbreakers song seems an appropriate anthem … 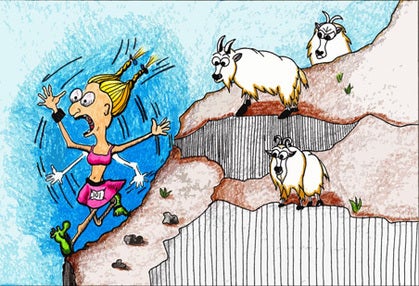 Downhill running is an art. The chorus of a Tom Petty and the Heartbreakers song seems an appropriate anthem for a proficient downhiller plummeting down a gnarly slope: “… And I’m free, I’m free fallin.'” But for beginning trail runners, this seamless downhill dance takes practice.

Pro downhill ski racers regularly hit speeds of 40 to 50 miles per hour, minimizing their times by taking the best line to avoid sliding, i.e. braking. And, even though it is impossible for a runner to travel that fast, many trail runners put on the brakes, crippled by fear and/or lack of technique. Here we’ve collected advice from trail running’s top descenders to help you cut loose on the descents.

While braking by landing on your heels provides a feeling of control, it strains your joints and slows you down. Advises Max King, 31, of Bend, Oregon, a world-class downhill runner and 2011 World Mountain Running Champion, “Commit to a downhill by leaning into the hill from your ankles. Rather than landing on your heels, place your feet directly under your body and if you have to slow down, take short steps and use the skidding motion of your forefoot to brake.”

Taking long, gaping “overstrides” downhill results in post-race quivering quads. In ultra events this body-punishing technique might force you to sacrifice your race altogether. Instead, land with your feet under your hips and maintain an open, relaxed stride; you will run faster, and save your quads. Continues King, “In order to keep your feet underneath you, employ a high turnover rate.”

When descending, assess the upcoming terrain to choose a good line, one that allows for the least braking or slowing and potential for injury (e.g. spraining an ankle on jagged rocks). Dave Mackey, 41, of San Francisco, the course record-holder at Oakridge, Oregon’s Where’s Waldo 100K, who is revered by many as the downhill master, says, “Look 10 to 15 feet ahead to pick your line on technical trails, and look even farther ahead on tamer trails and dirt roads so you can focus more on maintaining momentum.”

Luke Nelson, 31, a competitive mountain runner in Pocatello, Idaho, and member of the U.S. Ski Mountaineering Team, warns that looking immediately in front of you leads to “decreased response time and poor route decisions.”

Honing your balance is the glue that holds your downhill technique together. According to orthopedic physical therapist and elite trail ultrarunner, in Bozeman, Montana, 40-year-old Nikki Kimball, good balance on downhills gives you more confidence. “Confidence translates to faster downhill running and less injury risk,” she says. “Injuries often occur when runners are scared and put the brakes on suddenly.”

And then it all comes down to trusting your body. “If you ask any advanced skier how they shredded a difficult line, most would answer that their movements become unconscious,” says Nelson. “As a runner you must learn to trust your trained instincts.”