It is no secret that yoga is a fantastic complement to trail running and ideal for overall physical and emotional well-being. The popular, active forms of yoga—Vinyasa, Ashtanga, Bikram, Flow/Core—are effective ways to build strength, balance, range of motion and cardiovascular conditioning. A key component to optimal running is maintaining balance, and that requires a multi-dimensional approach to training.

Yin Yoga is considered the other half of a yoga practice. This style targets the denser connective tissue, particularly within the joints, which other styles of yoga or exercise can’t adequately address. Practicing Yin Yoga requires an alternate approach, one where striving and effort are released and the body is invited to relax.

Benefits of the Practice

By coming into poses that keep the muscles relatively inactive, gravity and time are skillfully used to place stress upon the plastic-like tissue within the joint capsules, the dense connective tissue, ligaments, tendons and bones.

“[With many sports injuries], the problem is most often neither in the musculature nor the skeleton,” says Dr. Robert Schleip, director of the Fascia Research Project at Ulm University, Germany, and research director of the European Rolfing Association. “Instead, it is the structure of the connective tissue—ligaments, tendons, joint capsules, etc.—that may have been loaded beyond its prepared capacity.”

So, working in this way greatly benefits the health of the joints by reducing fixation, maintaining functional mobility, preventing degeneration and increasing hydration.

However, the benefits go beyond the physical. A naturally meditative practice, by spending time in stillness, Yin Yoga creates the opportunity to closely examine the nuanced sensation of the tissue as it receives the benefits from the long holds, as well as observe the natural tendencies of the mind.

This time of inward focus directly parallels all that takes place on a challenging run and is a valuable component to athletic training. It allows us to become more receptive to any adversity whether it’s mild discomfort in the body, or agitation in the mind. By learning to relax through these sweeping states, we can become more tolerant of that discomfort, and may notice that a certain level of calm arises. Within a more peaceful and grounded state, we have a greater capacity to examine our goals and appreciate our accomplishments. It’s truly the ultimate recharge.

There are four main principles of Yin Yoga. First, come into a pose and go to the first point of resistance, and from that mild “edge” of sensation, observe what is being felt. Sensation should be no more than a mild, dull ache, and not gravitate toward anything sharp, stabbing or burning.

The second principle is to relax the target area(s). With the muscles relatively relaxed, the stress will transfer to the dense connective tissue within and around the muscle and joints.

The third principle is to remain relatively still for relatively long periods of time. Postures can be held anywhere from 3 to 10 minutes, but start with a time frame that works for you. Keep in mind that you are not fixed in a single spot for the duration of the pose. Make sure to change the angle of the pose to accommodate for any release, or to back away from sensation that becomes too intense.

Lastly, the fourth principle of the practice is to release with care. Upon coming out of a pose, it’s normal to feel some fragility or vulnerability in the tissue that was stressed, so exit slowly and, between postures, give yourself a minute or two to rest in a prone or supine position. Within this “resonance” phase, observe the sensations in the body.

Practice the postures sequentially as listed, allowing for at least three minutes in each pose, and be sure to err on the mild side. 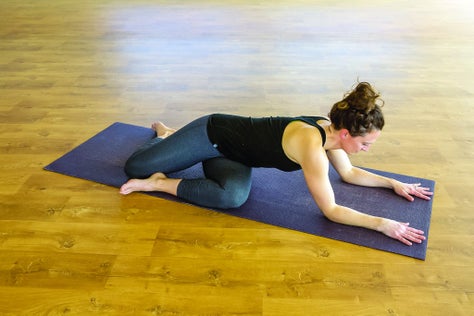 How: Sit with feet on the floor, mat-width apart, dropping the knees to one side and creating a pinwheel shape with the legs. Walk the hands away from the body and drop to the forearms as shown, or allow the chest to rest on the floor.

Why: This pose internally and externally rotates the legs, which is a complementary action to the constant hip flexion and extension that takes place while running. This pose also creates a gentle twist in the spine and can stretch the quadratus lumborum (a spine and hip stabilizer located in the lower part of the back). 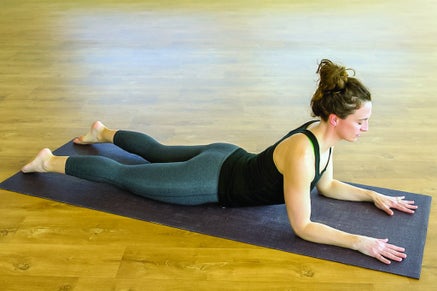 How: Lying on your stomach, place the elbows under the shoulders, keeping the legs relaxed. Head may be kept in a neutral position, fall forward or rest on a block.

Why: Running, poor posture and the aging process can flatten the curves of the spine. That curvature is critical to properly absorbing the stress and strain we put on the body through our movement. Sphinx pose invites a gentle compression to help maintain the health and natural integrity of the spine. 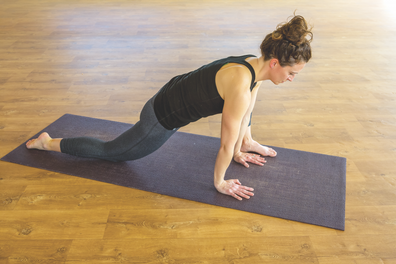 How: From standing, step the foot forward, slightly wider than the hip, planting the hands or forearms inside the leg on the floor.

Why: Targets the hip flexor of the back leg, which running can shorten, causing pull on other areas of the body, creating imbalance. The placement of the front leg highlights the often-neglected inner thigh and groin, which is vital for the stability of the knee and function of the running movement. 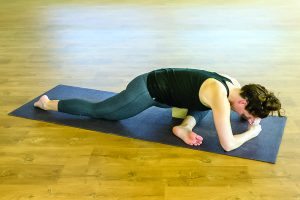 How: Lying on your stomach, take the knee forward, externally rotating the thigh. Do so without props, or place a block or blanket under the hip or thigh, closer to the knee (as shown), and experiment with taking the lower leg more parallel to the front edge of the mat. Fold forward to whatever degree you safely can, without feeling tension in the knee.

Why: Targets the tissue of the outer hip of the front leg (piriformis and gluteus medius), and the hip flexor of the back leg. Runners can benefit from the release of this often-sticky area to encourage proper hip function: movement of the femur in the hip socket and stability in the form of joint integration. 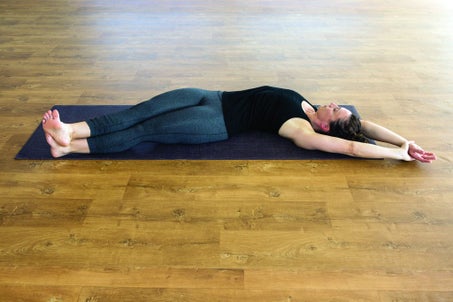 How: Lie on your back and bend the knees, planting the feet on the floor. Lift the hips and shift them to the right side of the mat, keeping the low back flush to the floor. Straighten the legs to the left corner of the mat, and shift your upper body to the left, shoulders on the mat, arms overhead holding onto the elbows or wrist (as shown). Cross one ankle over the other, choosing whichever foot feels best. Switch sides.

Why: Runners are typically focused on moving in one direction—forward. Lateral flexion is a key component to the overall health and function of the spine and is a great way to stimulate the entire side line of the body (obliques, intercostals, IT band). This pose may end up being your post-run go-to.

Terry Cockburn has been teaching yoga since 2006 and owns Freeport Yoga Company in Freeport, Maine (www.freeportyogaco.com).

This article originally appeared in the June 2018 issue of Trail Runner.