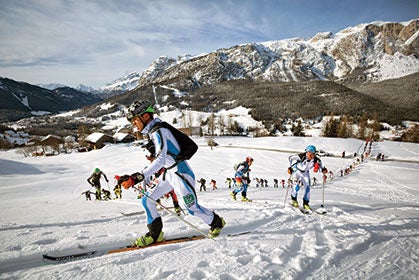 Skimo racing is well established in Europe (above), and is gaining popularity in North America. Photo by PattitucciPhoto.

Skyrunning World champions Stevie Kremer and Kilian Jornet do it. Idaho ultrarunner and 2014 Bighorn 100 winner Luke Nelson does it.

A Primer on Skimo

A typical skimo session includes numerous lung-busting ascents and quad-burning descents on groomed ski slopes or off-piste (i.e. in the backcountry). Participants use lightweight skis, typically much shorter and narrower than standard alpine skis, alpine-touring (AT) bindings—which allow skiers to lock their heels for descents and release them when moving uphill—and mohair skins to help their skis stick to the snow while climbing, or “skinning” up.

At the top of a climb, skiers transition from uphill to downhill by pulling their skins off their ski and locking their heels into their bindings.

Stevie Kremer, who returned from a year of training for both skimo and trail running during a teaching stint in Italy in 2013 to experience a phenomenal string of record-breaking wins at major European and U.S. trail races, believes skimo training played a role.

“Randonee complements mountain running, because you’re constantly moving uphill at a fast pace,” says Kremer. “It’s a great break from running, and gives your muscles a chance to recover.”

Nikki LaRochelle, another trail runner turned ski mountaineer, agrees: “When spring rolls around and we all start running again, the transition to uphill running feels far less painful coming off a skimo season.”

“We commonly skin and ski 10,000 vertical feet in three to five hours,” says Teague Holmes, another longtime skimo racer and mountain runner. “After those numbers, when you look at trail race stats and see 4,000 feet listed for a trail marathon, you start to think: ‘That’s kind of a flat course.’”

The reduced impact also has benefits for runners recovering from injury. After Sari Anderson underwent ankle surgery a year and a half ago, she found a new appreciation for skimo.

“Trail running has always been one of my favorite ways to get out in the wilderness,” says Anderson. “While running has been difficult with the instability of my ankle, skimo gives me the same feeling of escaping into the mountains.”

The prospect of navigating steep descents in varying snow conditions on the sport’s lightweight gear can be intimidating. Here are a few tips to ease your transition.

“Buy a ski pass at an alpine area and ski a lot,” Swenson advises. “Train with experienced racers; look for clinics before and after races. And, be patient—there are no shortcuts to being proficient other than hours on skis.”

Keep It Simple. Because high-end racing gear can be prohibitively expensive, start out with second-hand, entry-level or rental gear.

Be Avalanche Aware. If you plan to head into the backcountry, learning about avalanche safety is crucial: seek out clinics at local avalanche information centers, mountaineering schools, ski patrols and guiding companies.

Try an Uphill-Only Race. More ski areas are offering uphill-only events that can get you comfortable on the gear before signing up for a true skimo race. Many ski areas have regulations regarding uphill skinning; check their policies before heading up the slopes.

Tap into the Community. “Find a friend or a group who is also interested in skimo and make an effort to get to a local race,” advises elite ski-mountaineering racer Bryan Wickenhauser.

Have Fun. Skimo allows you to experience the pure joy of flying downhill. “The sport is just plain fun,” says LaRochelle. “Hard, gut-busting climbs, technical, zippy descents—I have a smile on my face nearly the whole time.”

Elsey Davis Sets Winter Record on the Bob Graham Round