Your leg muscles and lungs burn as you hammer up a snowy trail. Hill training has always been part … 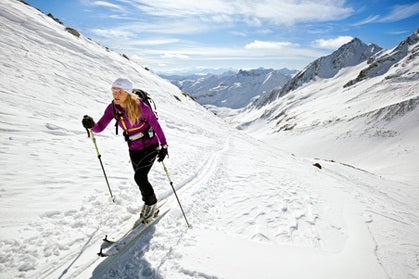 Your leg muscles and lungs burn as you hammer up a snowy trail. Hill training has always been part of your speed work for trail races. The grade flattens as you crest the hill and you … glide off the other side? Yes. Skiing offers runners a valuable cross-training tool. In fact, running through a snowy winter can make you stale, unmotivated by dismal conditions. Distance workouts, hill repeats and strength and balance work can all be done effectively on skis. And it keeps you mentally fresh.

Several of today’s leading trail runners, including Kilian Jornet, Stephanie Howe, Scott Jurek and Luke Nelson, have countless hours of ski training in their athletic histories. A physical therapist and ultrarunning legend, Jurek of Boulder, Colorado, says, “The aerobic workout you get from cross-country skiing is unparalleled, and the break from running allows the `running body’ to be rejuvenated for the spring.”

Nelson, of Pocatello, Idaho, who, along with ultras, races in ski-mountaineering events, says the strength, speed and general-fitness gains make him a stronger trail runner.

The two types of skiing most beneficial to runners are cross country and alpine touring (also called randonee and ski mountaineering).

Of the two genres, cross-country skiing, which is practiced on flat to rolling terrain, is more popular, easier to learn and generally more accessible than alpine touring (AT). There are two separate techniques within cross country: the traditional “diagonal stride,” in which you alternate kicking off one ski and gliding on the other with the skis running parallel, also gaining momentum from your poles; and skate skiing, in which you propel yourself on a smooth track like an ice skater, again using poles for more speed (and training).

For the most consistent conditions, cross-country ski areas offer groomed trails, which allow for more efficient technique and workouts. Traditional skiers place each ski into one of two parallel grooves etched into the snow by a machine, while skaters use an adjacent smooth track.

AT raises the bar in terms of startup costs and prerequisite skills, the latter of which requires a background in alpine skiing and, if you’re skiing in the backcountry, a solid foundation in avalanche awareness. AT consists of skiing up and down steep slopes wearing skis with bindings that allow the heel to be free for uphill treks and locked down for descents. On the uphills, you attach a removable climbing “skin” (it adheres to the ski base with a permanent glue that does not stick to the ski upon removal), which allows you to climb surprisingly steep grades. To get started, try AT by “skinning” up a ski area, provided uphill traffic is allowed, which is much safer (i.e. no avalanche concerns) and convenient than backcountry skiing.

Both cross-country and AT skiing offer racing options. Like trail races, most cross-country ski races feature mass starts. Someone’s pole might land in your path or you may step on a competitor’s ski, but after the first kilometer or so the main difference is that, on skis, you can rest more on the downhills than runners. Hence, you can climb with higher intensity than you would on foot, knowing that a rest period awaits.

Most AT races last one to four hours and require extremely high cardiovascular output on the climbs, and a great deal of lower-extremity strength on the generally steep, technical downs.

I began racing trail ultramarathons 13 years ago and have since run an average of six to eight ultras a year along with many stage races and marathons. Despite consistently high running race mileage, my body resists many of the cumulative-trauma running injuries. Why? Skiing.

For trail runners, the benefits of either skiing type are numerous. Says Dan Heil, PhD, professor of physiology at Montana State University, and an avid endurance athlete, “Cross-country skiing is the single best complementary aerobic exercise to running.” He notes that the cardiovascular stresses of skiing mirror the physical stresses of running. Because skiing utilizes the same large, lower-body muscle groups that are used in running plus more of the upper body and core, it is generally more cardiovascularly demanding than running, making it an excellent choice for interval training and other speed work.

In addition, pole use can strengthen abdominal and back muscles. I have finished ski races with abdominal muscles so fatigued that they hurt when I laugh two days later.

While skiing can reduce injury risk and impart overall health benefits, can it improve running performance? 2011 USATF 50K National Trail-Running Champion and competitive cross-country ski racer, Stephanie Howe, 27, of Bend, Oregon, says yes. In working toward her PhD in exercise physiology at Oregon State University, Howe also has an academic interest in the relationship of strength training to performance in both skiing and running. “There is laboratory research that links improved performance to strength training,” says Howe. “And [anecdotally] the strength I have gained from ski training has helped my running. I feel better on hills and generally stronger when racing.”

Trail runners also need more balance and proprioception skills than road runners. Cross country and ski mountaineering require athletes to maintain balance on a single moving ski. In skating, one’s weight is completely on one ski as the other advances forward. Ascending even moderate hills with good technique requires traditional cross-country and randonee skiers to push off one ski, committing all of the athlete’s weight onto the other forward ski.

Most skier-trail runners are great downhill trail runners too. The dynamic balance gained from skiing improves your confidence and ability to complete quick side-to-side movements on technical terrain. To enhance my balance skills, I make a game of seeing how far I can ride one ski down a slight grade.

Skiing provides a mental break from running. You might find that closeting your trail shoes for a few months each year helps keep your love for the sport alive.

“When it is cold and snowy outside, it’s easy to become unmotivated to run,” says Howe. But skiing helps her maintain a fresh attitude and fresh physical state throughout the off season.

Even while running, she trains by “ski walking,” an uphill workout in which the athlete mimics traditional cross-country technique by walking with a bouncy long stride. This offers Howe a mental break from running hill repeats, and serves her well in ultra racing.

“Using ski walking, I often pass other runners who are hiking uphill, even though we are expending about the same amount of energy,” she says. In fact when Howe feels herself mentally or physically fatigued from too much running in the summer she will “take a few days and focus on `ski’ training to let (herself) recover.”

Nikki Kimball, MSPT, lives in Bozeman, Montana, and is a three-time USATF Ultra Runner of the Year. She has top-20 finishes at NCAA Division I national skiing championships.

While skiers use it as off-season training, ski bounding builds strong trail runners too.

You can add interval and fartlek workouts (carry your poles on a trail run and ski bound on gentle to moderate uphills). For steeper hills, use ski walking.

Nelson recommends the following workout once a week, either on AT or cross-country gear.

The Science And Theory About Training For Steep Trails