A conversation with elite snowshoers Eric Hartmark and Kelly Mortenson 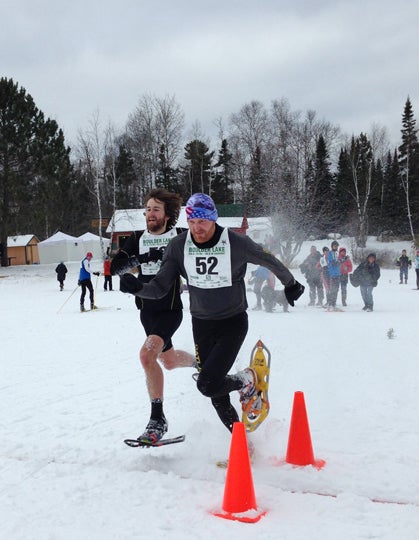 If the Mountain West is a mecca for American trail runners, the upper Midwest (or “North,” as some now call it) might be the equivalent for snowshoe racers.

Greg Hexum, 44, of Esko, Minnesota, twice won the US Snowshoe Association (U.S.S.S.A.) National Championship, in 2006 and 2007. 2014 U.S.S.S.A. National Champion (and Western States 100 winner) Stephanie Howe, 31, lives in Bend, Oregon, but grew up outside the Twin Cities, and 2015 U.S.S.S.A. Champion Scott Gall, 40, is from Cedar Falls, Iowa. Former Brooks-Hansons runner Michael Reneau, 36, of Minneapolis, has represented the U.S. at the International Snowshoe Federation (I.S.S.F.) World Snowshoe Championship, most recently in Sweden in 2014.

And then there’s Eric Hartmark.

Hailing from Duluth, Minnesota, anchor to the northernmost of the state’s Northwoods, Hartmark, 36, has had an impressive follow-up act to a top-flight running career. The former University of Minnesota and Brooks-Hansons athlete has twice won the U.S.S.S.A. Championship and finished on the podium twice more; four times he has represented the U.S. at the I.S.S.F. World Championship, finishing as high as second.

A few hours south on I-35, in Saint Paul, is Hartmark’s former coach, Kelly Mortenson, 43. Like Hartmark, Mortenson has run in the U.S. Olympic Marathon Trials, placing 12th in 2000. He was also a founding member of the Twin Cities-based Team USA Minnesota, a training center for elite distance runners. Mortenson finished third in his first U.S.S.S.A. Championship, in 2007, and was runner-up in 2009. In 2014, he finished 10th overall, second place in the masters category.

We caught up with this elite snowshoeing duo to learn more about the niche-within-a-niche that is snowshoe running. Here are three takeaways from our conversation about the sport.

1. Getting started is pretty easy (if you already run) …

“I got started snowshoeing by my awesome wife, Mary Ross-Mortenson,” says Mortenson. “She was an avid snowshoer and I just ran all winter … [so] she bought me a pair of snowshoes for Christmas in 2006.”

Since Minneapolis was hosting the 2007 U.S.S.S.A. Championship just a few months later, he decided to run a qualifying race, where he was blown away by reigning national champion Hexum.

“But by my second race, at Nationals, I got beat by less than one minute and placed third my first season,” he says.

Meanwhile, Mortenson began trying to convince Hartmark, whom he’d coached after college, to strap on some snowshoes.

“[Mortenson and Hexum] tried convincing me for a few years to get into snowshoeing,” Hartmark says. “In 2010, I heard about a national championship qualifying race in Duluth … [and] a friend of mine said that I could use a pair of his snowshoes if I decided to run it.”

Hartmark ran the seven miles from his home to the race start, holding the $60 he needed for his race entry and U.S.S.S.A. membership fee. But when he arrived, he was told they were not accepting race-day registration. “So I ended up running around and cheering on my friends who were attempting to qualify and then ran the seven miles back home,” he says.

The next year, there was a qualifying race at Boulder Lake, north of Duluth. But Hartmark still didn’t have his own snowshoes.

“Mortenson said he was planning on coming up for the race and offered to let me use a pair of his snowshoes if I wanted to run the race,” he says. “I took him up on his offer and ran my first snowshoe race.” 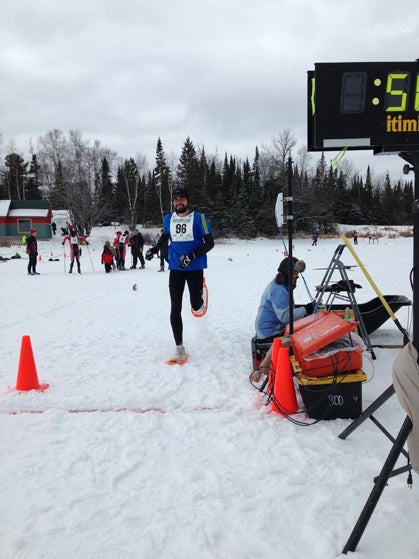 2. … but in many ways, it’s like learning to run all over again

According to Hartmark and Mortenson, running with snowshoes is often, but not always, harder than running without them.

“During my first snowshoe race, I thought I was extremely out of shape,” says Hartmark. “I was hurting badly very early in the race. I later realized that snowshoeing is just a lot more painful than road racing.”

The size of the snowshoes also makes the going more awkward.

“It is fairly common to clip your ankles with the snowshoes while running,” he continues. “The running form is also quite a bit more awkward when running on snowshoes. When just running in shoes, you can run with your natural stride; however, while snowshoeing, you have to be more aware of a little bit of a strange or wider stride.”

“[Snowshoe running] is harder in that you have more weight on your feet while you are running, so you are naturally running slower,” says Mortenson. “With that, your lungs and heart are working harder, and [you] are forced to slow down to keep your heart rate down to a manageable level.”

Some aspects of snowshoe running are easier than typical trail running, though. “Your legs get a break because you are running on softer surfaces and running slower, even though you are working hard,” says Mortenson. Snowshoes also provide excellent traction on snowy and icy trails.

And for runners prone to faceplanting, running in deep snow has an additional advantage. “When you take a hard fall … the snow is usually a bit more forgiving than bare rocks,” says Hartmark. “Although that is only if you are not trampled by snowshoe races shortly after you fall.”

3. As with trail racing, snowshoe racing in Europe has a distinctive vibe

Hartmark knows plenty about being trampled. At the 2013 ISSF World Snowshoe Championship in Val di Non, Trentino, Italy, he found himself struggling to find breathing room in a frantic pack of snowshoers on a narrow trail, much farther behind the leaders than he was accustomed. Just ahead of him, he saw a fellow American take an elbow and go down hard.

“I quickly jumped, trying to avoid stepping on him, but lost my balance in mid-air, flew forward and landed on my chest,” Hartmark says. “I quickly pushed my hands into the ground in an attempt to get back up, only to feel the sharp spikes of a snowshoe in my back, forcing my face back into the snow. I went to get up again and saw the bottom of a snowshoe narrowly miss my face.”

On the third try, he made it up, and started running hard.

His race that year seemed doomed from the start. Despite actually owning his own pair of snowshoes by then, Hartmark’s had been manufactured without bindings, which he thought to be in violation of I.S.S.F. rules. He borrowed a pair from a friend in Italy and, as he stood on the line, learned from an American teammate he would need to have the shoes certified by a race official. Clock winding down, he tried frantically to find someone who spoke enough English to affix a certification tag to his equipment with enough time to wedge his way back through thousands of racers to the front of the starting chute.

Once he got there, he says, he noticed that “over 90 percent of competitors did not have bindings on their snowshoes.”

Hartmark says some rules seem only loosely enforced internationally. At the 2012 World Championship in Quebec, he thought he was abiding by I.S.S.F. rules on snowshoe size but found he had by far the largest snowshoes of any competitor. (Reneau, the Minneapolis-based snowshoer, has had a similar experience; he once compared it to “showing up at the Payton Jordan [track] Invitational 10K wearing a pair of Brooks Dyads [a clunky, straight-lasted training shoe] instead of track spikes.”)

Hartmark recalls, “When I finished the race, a reporter approached me and immediately asked, ‘Why do you wear such gigantic snowshoes? Doesn’t that slow you down?’”

In 2013, as Hartmark stood at the start line of the World Championship with certification tags affixed to his snowshoes, struggling to understand the Italian words being blared through the P.A. system, he noticed one additional quirk of international racing. “A lot of the Europeans around me inched their way ahead of the starting line and in front of me,” he says. “They kept gradually inching forward … When the race started, a lot of them were a full meter in front of the starting line.”

“I have noticed since then that this is not uncommon,” he continues. “In Sweden [at the 2014 World Championship] I was on the starting line and one of the Swedish athletes came up and stood on the front of my snowshoes prior to the start. This year, the former world champion made sure he was ahead of the starting line when the gun went off as well. It is definitely a different experience.”

How to Respect the Environment

Your Guide To Identifying Animal Tracks On The Trail