Inline Skating is back and you should be doing it 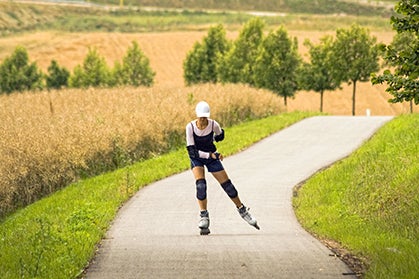 Far from being a relic alongside the disco ball or shoulder-baring Flashdance shirts, skating has never really gone away—although the official name of its modern-day variant is inline skating, which distinguishes it from the four-corner wheel style made famous by car-hop waitresses and roller-derby queens. Yes, skating has survived into the 21st Century, and (don’t snicker!) is an excellent cross-training option for trail runners.

Skating has been part of my training routine for nearly 20 years. I generally skate a few times per month, either with long aerobic sessions along the California coastline or random “skate-arounds” at a local park or elementary school. For aerobic workouts, dry concrete or asphalt bike paths are ideal, but anywhere you can find long stretches of asphalt—the fewer turns, the better—in a lightly trafficked area works.

Concrete Benefits
Due to trails’ often irregular, rugged terrain, trail runners move laterally more than road runners—think about leaping back and forth across mud puddles, or hopping from one rock to another while crossing a shallow stream. Even just stabilizing your foot on rocks, roots or sloped trails requires lateral-muscle strength and coordination from the adductors on the inside of your thigh and abductors on the outside of your hip.

Additionally, running steep hills requires strong posterior muscles (hamstrings, gluteal muscles and low-back extensors) to propel you upward, and strong quadriceps to control your descent. Inline skating strengthens all of those muscle groups. Combined with the simultaneous challenges of balance and cardiovascular demand, skating creates a “muscle-confusion” situation that is almost guaranteed to leave you sore in all the right places.

Get Inline
If you are a newbie, focus on form. Your shoulders should remain over your hips, and facing forward rather than rotating from side to side. Keep your knees and ankles straight: don’t let them cave inward. Shift your weight slightly forward from the ankles. Bend through the ankles, knees and hips, and push one leg to the side to generate movement. As you begin rolling, strive for smooth leg movement from push off to glide, maximizing your glide (rolling) distance on each leg, using gentle arm swing coordinated with leg movements.

First, though, learn how to stop. Inline skates have a heel brake to control your speed and/or bring you to a complete halt. Place your braking foot forward and bend your rear leg before raising your breaking-foot toes to engage the heel brake.
Be careful not to shift your weight too far back, or you risk landing on your tail. On that note, basic protective gear is a wise idea: kneepads, wrist guards and a helmet offer cheap insurance from nasty bumps and scrapes. One cardinal rule of inline skating is that, sooner or later, you are going to crash.

As your skating improves, your strength and coordination while running technical trails is almost certain to follow. Whether you want to add the Daisy Dukes or muscle pants is up to you.

Rollerblade workouts
Interval workout
– Warm up with 10 minutes of easy skating.
– Skate hard for 4 minutes, with an effort level similar to half-marathon race pace.Take continuous strides, even on slight downhills. Bend deeply at the waist
(think of a speed skater).
– Slightly flex your stance leg.
– Skate an easy 2 minutes between intervals, returning to a more upright posture.
– Repeat 4 minutes hard followed by 2 minutes recovery until you complete five hard intervals.
– Cool down with 10 minutes of easy skating.

Incline workout
Find a long, gradual (five- to 10-percent grade) hill at least one-quarter-mile long, preferably with minimal turns.
– Warm up with 10 minutes of easy skating.
– From the base of the hill, sprint uphill for one minute at 5K or 1-mile race-pace effort.
Lower your center of gravity by bending farther from the waist and bending the knees farther to deepen stance.
Push as hard as possible with your legs.
Swing your arms for balance.
– Stand upright and coast
back down the hill. Use your brake gently with your back knee bent to control speed on the way down.
Reach the base of the hill with about 20 to 30 seconds to spare before a 2-minute rest interval is over.
– Repeat until you complete 10 intervals.
– Cool down with 10 minutes of easy skating.

Free-skate workout
– Go to an empty parking lot. Skate like a kid,  and try new things! For example:
– Weave through obstacles
– Carve tight turns
– Crossover skating: push one leg across the other while turning
– Roll and turn on one leg
– Turn from facing forward to backward to forward while rolling
– Roll with feet in heel-to-toe position
– Grapevine skating: cross feet in front and behind each other while rolling forward
– Roll in crouched position, or crouch with one foot extendedDonald Buraglio (www.runningandrambling.com), MPT, is a physical therapist and ultrarunner in Monterey County, California. He is the co-author of The Running Life: Wisdom and Observations from a Lifetime of Running.