As an older runner who found fell running after undergoing chemotherapy in 2009, I have increased … 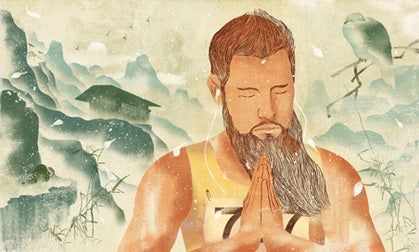 As an older runner who found fell running after undergoing chemotherapy in 2009, I have increased my mileage to about 35 miles per week, including a long run of about 17 miles. Is it possible for a 65-year-old male with attitude to train for a 100-miler?

I’ll say absolutely, if only because you said you were a “65-year-old with attitude.” A strong positive attitude is a requirement for anyone to run a 100-mile foot race. Seattle-based endurance coach and 2010’s Plain 100-Mile winner, Justin Angle, says, “Running 100 miles is largely a mental pursuit. Your training will get you to the starting line, but it’s your mind that will get you to the finish.”

The basics of any program include stress and recovery. With your current mileage, you will have to build on that base by gradually adding miles to each run. Angle suggests a program that adds 10- to 15-percent volume or time running to each week for two weeks. This is called the build, and is followed by a third “recovery week,” where the overall training volume is decreased to 50 to 60 percent of peak volume.

“Stay consistent with this cycle and strive to gradually build up to a 70- to 80-mile week,” says Angle. Listen to your body, and back off when it’s begging for rest.

Testing yourself through racing can also be very beneficial. First, schedule your 100-mile race then, working backwards, plan 50-mile and 50-kilometer races as part of training. These earlier races will serve as stepping stones to increase your distance and confidence. It’s almost impossible to mimic the effort of a race in training, so take full advantage of the experience. Schedule “practice” races with plenty of time to recover and accomplish another build phase.