At last Saturday’s North Face Endurance Challenge 50-Mile Championship near San Francisco, several runners who are top-level competitors at shorter distances took on the 50-mile distance for the first time.

These runners, who were spotlighted before the race as contenders for podium finishes, had access to excellent training advice and did all they could to prepare for the big day. But preparation isn’t a substitute for actually going the distance and troubleshooting along the way.

Trail Runner asked three notable rookies—Tim Tollefson, Alicia Shay and YiOu Wang—to share what they learned at this race and what they might do differently in hindsight. Tollefson finished 8th among the men in 6:28, Shay placed 6th among the women in 8:21 and Wang dropped from the race around mile 30.

All three have successful road-racing backgrounds and excelled at their 50K debuts. But graduating from 50K to 50M is a heck of a lot harder than going from a marathon to 50K. In short, they discovered the adage about experience being the best teacher—or, as C.S. Lewis once wrote, “the most brutal of teachers”—holds true in ultrarunning.

Runners like Tollefson, Shay and Wang, who are used to a blistering pace at marathon-or-shorter distances, wisely adopt a more conservative pace for the ultra distance. But going slower feels tentative and can erode confidence unless they’ve practiced it enough.

“Honestly, the hardest thing about adding the extra miles was just running slower. I feel much better when I’m moving at a faster clip,” says Shay, 32, of Flagstaff, Arizona.

A decade ago, Shay was a two-time NCAA Division I collegiate 10K champion, and she started trail racing 2012. She placed 3rd at this year’s Chuckanut 50K—her only 50K prior to The North Face 50-Mile Championship—and also won a 39K trail race in Flagstaff.

“I thought that the slow and technical sections would be a good opportunity to rest a little, take in fuel and recharge for the more runnable sections,” Shay adds. “It ended up being the opposite—the slow sections just made me feel slow and out of rhythm, and that would lead me toward mentally feeling like I was tired and barely covering any ground.”

To prepare for her next ultra, Shay plans to incorporate more technical training and “mentally learn how to still stay on the gas pedal when I am not necessarily moving fast.” Also, she won’t hang back. “In hindsight, I would have run faster from the beginning and put myself in the mix of the front at the race.”

Like Shay, Tollefson, 29, kept his pace comfortable. “I really wanted to respect the distance,” says the 2:18 marathoner from Mammoth Lakes, California. He won and set a course record last September at the Flagline 50K, which was the USA 50K Trail Championships and his ultra debut. Before last weekend’s 50-mile race, the longest time he had ever spent running was 3 hours, 25 minutes.

In retrospect, Tollefson realizes he could have pushed harder and should have paced off a more experienced runner. “I really wish I had tried to stay with my [Nike] teammate, Alex [Varner], when he made a move shortly after the first Cardiac Aid Station [around Mile 24],” Tollefson says. “He knows the trails so well and is such an intelligent racer that attempting to stick with him would have been a smart decision.”

The upside to Tollefson’s more comfortable pace was that he truly had fun on the course, “literally laughing and joking my way through the first two loops with the other guys. … I found myself appreciating the spectacular trails I was running more than pushing the pace.” 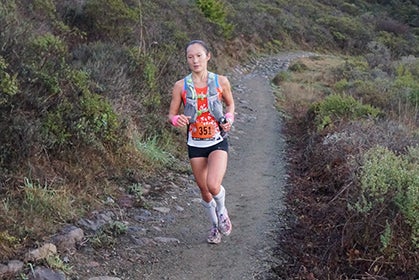 Unfortunately, Wang, 29, did not have to hold back her pace, because a nagging injury did the job for her. In the early miles of the race, she felt a sore spot in her hamstring.

“I hoped the tightness would warm up and dissipate, but the up-and-down terrain made the situation worse and worse,” says Wang of Mill Valley, California, a 2:38 marathoner who won and beat the course record by 21 minutes at her 50K debut, the Skyline 50K in August. Going up an 1800-foot climb around Mile 20, she couldn’t get any power out of her right leg. She decided to drop from the race to avoid more serious injury.

RELATED:Three Strategies to Finish Fast In Your Next Trail Race

“My challenge has been getting to the starting line completely healthy,” adds Wang. “I think I was overly ambitious to attempt my first 50K and 50-mile in the same year, and I needed more time to recover. … I need to spend more time on cross training, core strength and flexibility. In the midst of a busy and sometimes stressful few months of work, I let ‘the little things’ slip, and this experience has taught me that often the hardest part of race preparation is staying healthy.”

Based on her recent race experience, Shay plans to alter her training for ultras in the coming year—and, like Wang, focus on staying healthy for more consistent training. She was sick going into Saturday’s race, and she was injured a few months ago so only had two solid months of training.

“The longest run I did leading into The North Face was 21 miles, and never over three hours, so I simply wasn’t used to being on my feet for so long to have the confidence of how to pace myself,” says Shay. “Also, I would’ve incorporated more runs that had a mixture of smooth trail as well as technical sections to practice changing gears, and I would have done some longer runs earlier in the morning to get used to waking up so early and being in the mode of running hard. It was challenging to wake up at 2:45 a.m. [on race day] and start racing at 5 a.m.”

Tollefson feels his training leading into the race was solid—“I had increased my total climbing, weekly mileage and included back-to-back runs,” he says—but he should have practiced race-day nutrition more. In the first half of the 50-mile race, he suffered through three full bathroom stops that slowed him down.

“The gels, fluids and waffles I was consuming did not agree with my stomach,” he says. He switched to water and Clif Shot Blocks, which suited his gut for the remainder of the race. 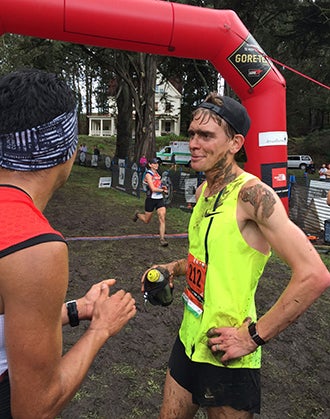 All three runners realized they could have made better choices in terms of what to wear and how to deal with their stuff at aid stations.

“I would have a better plan for figuring out what to do with my headlamp and anything I didn’t want to continue carrying,” says Wang. “I ended up carrying my headlamp and arm warmers all the way to the Cardiac Aid Station [Mile 23], and when it was taking too long to find my drop bag, I just left them on the side of the trail. Next time I would definitely have crew members to help with taking stuff I don’t want to carry anymore, or giving me more gels.”

Shay made two gear choices she regretted: her socks and her pack. “I just threw on what I thought was a decent pair of socks, but over the miles and mud they kept sliding down.” By Mile 10, she was bleeding from cuts on her Achilles, and she ran with bloody ankles the next 40 miles.

Meanwhile, her hydration pack bugged her. “I was concerned about not having enough fluid, so I carried a pack, but it just felt too bulky and hot,”she says. “In the future I’ll either just carry bottles that I can tuck in my shorts, or find a better-fitting pack.”

Tollefson chose to wear cushioned road flats rather than trail shoes, because he thought it was the best shoe from an injury-prevention perspective. For three-quarters of the race, he says his Nike Flyknit Lunars felt great and handled the terrain. But when he hit slick stairs and mud, he wished he had gone with a trail shoe. “I simply couldn’t run or stay upright on the mud, and I fell two or three times descending the switchbacks,” he says.

These runners might take heart from the example of this year’s women’s champion Magdalena Boulet, who was an ultra-distance rookie in 2013 when she finished 2nd.

Last year, as Boulet recounted in an interview with UltraRunnerPodcast.com, she failed to practice running in the dark. She wore an ill-fitting headlamp for the first time on race day, and it kept slipping down and bonking her nose.

This year, Boulet fine-tuned all aspects of her race-day execution and won in 7:08, more than 20 minutes faster than before. Not only is experience the best teacher, but it’s also, to quote Oscar Wilde, “the name we give our mistakes.”

Sarah Lavender Smith is a Contributing Editor at Trail Runner who blogs at TheRunnersTrip.com.