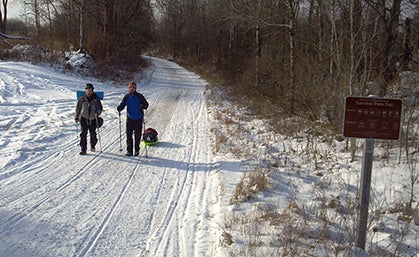 Racers on the Tuscobia Trail. Photo courtesy of Chris Scotch

“I grew up in northern Minnesota,” says ultrarunner Chris Scotch, 36. “Cold and winter was normal for me, so I didn’t realize other people didn’t like it.”

Maybe that’s why Scotch, only six months into his ultrarunning career, decided to run the Tuscobia Winter Ultra (which offers 35-, 75- and 150-mile distances) in 2010. It was the race’s second year, and only one other runner hoofed the full 150 miles.

In the 60-some hours it took him to finish, Scotch learned a lot—like just how very long it takes to finish a frigid ultramarathon on snow, as well as the hardships that such extended time in the cold can wreak on the body. “I was sleep-deprived and my feet had swollen a few sizes by the time I was done,” he remembers, “but I was really learning on the run.”

The following year, after Tuscobia’s race director nearly cancelled the race, Scotch and his wife, Helen Lavin, also an endurance runner, decided to pick up the responsibility of race directing. Though they now reside in Los Gatos, California, they loved the winter ultrarunning scene and wanted to keep the event alive. Says Scotch, “It’s a slower pace, more of a man-versus-nature experience than other 100-milers and ultra races. You just need to adjust your mindset.”

The race offers multisport options—participants can opt to either run, bike or ski the course—and takes place on the 75-mile Tuscobia State Trail in Wisconsin, a path laid over an old railroad line. 150-mile racers go out and back on the trail, while 35- and 75-milers take a bus to their starting respective points and race back. 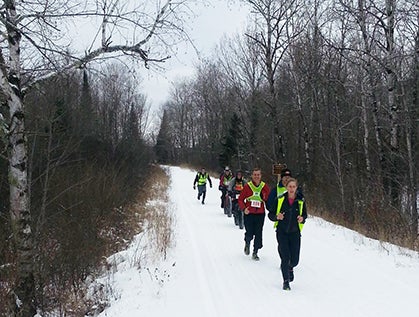 Racing in the cold. Photo courtesy of Chris Scotch

Temps can drop to 10 degrees below zero or shoot up to the mid-30s. Racers can expect rain, sleet or snow.

“It’s an educated guessing game,” says Scotch, who’s completed many winter ultra races, including the Arrowhead 135 in northern Minnesota and the 130K Actif Epica in Manitoba. “You want to have everything you might need, but you can’t carry your entire closet. That’s one of the fun challenges of winter racing.”

For a race like this, runners typically pull a sled laden with extra clothes, calorie-packed snacks, portable stoves, snowshoes, gaiters, sleeping bags and bivy sacks, among other items. The list of required items for the 75- and 150-mile distances of Tuscobia can be found here.

The race is semi-supported, and athletes get a hot breakfast before the start, as well as soup and drop-bags at checkpoints along the route. A laid-back, post-race party with lots of wintery swag and prizes await runners at the Chequamegon Canoe Club.

With so many of the existing winter endurance events being over 100 miles, Tuscobia’s 35-mile option offers a perfect gateway into winter racing for first-timers.

“To do longer races, you need experience,” says Scotch. “With Tuscobia, you can kind of ease into it—and then come back the next year for the 75-mile or the 150-mile race. It’s accessible to almost anyone.” 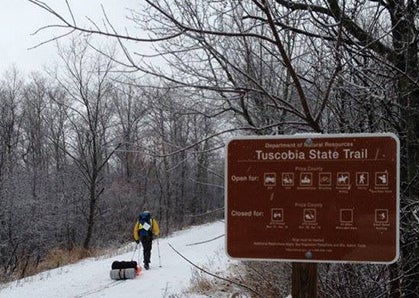 On the other hand, the 150-mile race attracts some of the toughest winter endurance athletes from across the U.S. and Canada, many of whom are preparing for Alaska’s Iditarod Trail Race or the Arrowhead 135. And Scotch and his fellow race directors have recently created a winter series that includes the Tuscobia, Actif Epica and the Arrowhead 135. Anyone who completes all three races makes it into the “Order of the Hrimthurs” (the Hrimthurs are a tribe of Nordic frost giants). So far only five racers have made the cut.

On December 27 this year, 168 racers will start the Tuscobia Winter Ultra to run, bike or ski across the Wisconsin outback. For more information, visit http://tuscobia.wordpress.com.