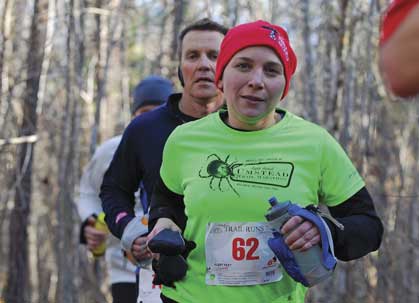 It takes power to lure trail runners out of their warm beds on what’s often the coldest day of the year. That power stems from a tightly knit trail-running community, combined with the stark winter landscape of the North Carolina Piedmont—rolling trails through pines and bare oaks, white-trunked sycamores along the North Fork of the Little River and sheltered stands of copper-leaved American beeches. The race, with 7K and 10-mile options, fills to capacity every year, even as it has grown to accommodate 600 runners at the Little River Regional Park near Durham.

Put on by a quirky local club known as the TrailHeads, LRTR exemplifies the group’s fun approach. Members are bestowed trail names like “Gilly,” “Goofus,” “Haggis” and “Sidetrack,” which are printed on the backs of their club shirts. Says co-race director Layna “Willow” Mosley, “Not to sound clichéd, but the TrailHeads make it easy to direct.” Jon “Bobcat” Parker marks the course every year, while Greg “Half Dome” Cordell and Roger “Edge” Halchin take care of food and the finish-line setup. And TrailHeads are always quick to jump in when needed. Says Mosley, “Two years ago, when it was 17 degrees at the start, Geoff ‘Ringo’ Scott went out the night before and bought cases of handwarmers for the runners.”

Despite rapid urbanization surrounding the North Carolina Piedmont, wild and open spaces still abound. In 2005, when John “Skwyrl” Strange started running the 391-acre Little River Regional Park’s trails, he hatched the idea of a race to promote local trails and stewardship. The money raised by the race—more than $41,000 to date—goes back to the park, which protects the surrounding watershed and regional drinking-water supply.

At the park entrance, runners are greeted with split-rail fences and open fields, lending to the park’s rural feel. The 10-mile course begins adjacent to meadows on the park entrance road, directing runners through a small corn crib on their way to the woods, and allowing them to space out before hitting singletrack. By mid-winter the fallen leaves have been tamped down, so the trail is clear and easy to follow, although you’ll find plenty of challenge in the camouflaged roots, slick (and sometimes icy) boardwalks, rocky climbs and muddy spots on the way down to the North Fork of the Little River. The trail follows a levee alongside the rushing river, past the peeling trunks of river birches before ascending steep stairs out of the floodplain. In 2013, Steve “Squonk” Hoge serenaded runners here on his bagpipes, bringing smiles to their otherwise labored faces.

The trail climbs a ridge and dives back into alternating sections of oak-hickory and pine forest that typify the Piedmont. The latter part of the run follows tightly looping trails and switchbacks through the sometimes snowy woods, where you can see small groups of runners and have no idea whether they are in front of you or behind you. Cheers from the finish spur runners up the last forested climb and into a field where they sprint for the “Finnish” line, complete with the Finnish flag.

Many local businesses have contributed prizes for random post-race drawings, so all participants, no matter their speed, have a shot at winning. The famed Trail Love award, usually determined by crowd cheers, is given to the runner who “makes the most intimate contact with the trail.” In 2013, Richard Puckett, who suffered a bad fall and needed a dozen stitches to close a cut over his eye, was the clear winner of a pocket first-aid kit.

At the end of the day, the Trail Love is shared by all. The TrailHeads welcome and encourage folks who are new to trail running to come out and run. Many kids, including members of the Chapel Hill/Carrboro Pacers Youth Running Club, set the 7K race as a winter training goal. And the timing of the race is a perfect kick-off for the other popular spring trail runs in the area.

With her husband, Andrew, Steph owns Runnerpeeps (runnerpeeps.com), a personalized group-running program. She is also a forest ecologist who teaches at NC State University, and writes about her trail adventures at stephjeffries.wordpress.com.