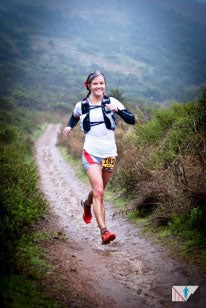 Historically, December is San Francisco’s wettest month, but the rain came a few days early this year. In fact, a series of heavy storms at the end of November prompted a last-minute course change for the North Face Endurance Challenge 50-Mile Championships, held in Golden Gate National Recreation Area, just north of the city in the Marin Headlands. California State Parks opted not to have hundreds of runners slopping along exposed, higher altitude trails, so runners were directed to complete two 23.4-mile laps on National Park Service lands (those good at math will realize the course was shortened to 46.8 miles).

But reroutes, strong winds, deep mud, deeper puddles and, yes, even more rain did not deter 247 runners (194 men and 53 women) from finishing the December 1 race. The average time through the messy course was 8:54:25:55.

Although Heras (who also won in 2010) thrived on the muddy course, the precip caused a number of DNFs, including Trail Runner’s Ashley Arnold, who slipped around mile 5 and ended the day with seven stitches in her right palm and a swollen ankle. Likewise, Megan Kimmel, who was eighth at mile 36.3, dropped after “dead calves & then the cold,” according to iRunFar. Kimmel was recently named 2012 USATF Trail Runner of the Year and the female USATF Trail Series Champion.

In addition to the weather, the day’s other snafu involved a group of runners who went off course about one-third of the way into the race—Sage Canaday, Adam Campbell, Jason Wolfe, Timmy Parr and Mike Foote, to name a few. “Lots of mistakes out there,” Canaday tweeted after the event. “Got lost early on (cut the course) and didn’t even know it.” The Boulder, Colorado-based runner dropped at mile 41.

Perhaps fourth-place female Caitlin Smith (7:05:00) sums up the day best on her blog: “I gave all of what I could yesterday at the North Face 50. I’ve never wanted to give up so bad and yet still make it close to another 24 miles. … I was thrilled to reconnect with folks from the ultra community and it was really amazing to run with an impressive field of women. I’d like to be doing more races with mud (maybe a touch less than yesterday), hills, and singletracks.”

The top 10 men and women are listed below. For a complete list of results, click here. For mile-by-mile updates, check out iRunFar’s live coverage.