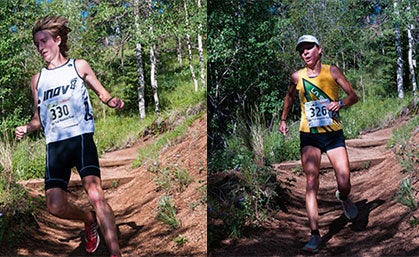 Competition heated up in Colorado on Sunday, July 14, as the La Sportiva Mountain Cup’s eighth race of the series, the Barr Trail Mountain race, attracted hundreds of mountain runners to compete in this exhilarating 12.5-mile race with an elevation gain of 3800 feet—on almost entirely dirt and gravel singletrack route.

Alex Nichols, 28, of Colorado Springs, won the Barr, crossing the finish line in 1:34:21. His main focus was not the Mountain Cup standings; he wanted to make the U.S. National Mountain Running team the following week. Placing sixth in the Cranmore Hill Climb that week gave him the final spot on the U.S. team at the 29th World Mountain Running Championships in Poland on September 8.

Laura Haefeli, 45, of Del Norte, Colorado, set a new age group record in the 45-49 group with her winning time of 1:56:55. Finishing behind her, Alison Bryant, 34, of Elkin, North Carolina, crossed the line in 2:02:51. At the beginning of the series, Bryant suffered from a hamstring injury and did not finish the first Mountain Cup race, the Moab Red Hot 33K. Due to her injury she wasn’t at full speed for the Hell’s Hills 25K. After taking May off, she was able to race to her full potential.

Overall she placed second in the series. She already spent her winnings on a trip to Poland with her husband, Jason Bryant. Together they ran in the 2013 World Long Distance Championships.

Matt Byrne, 37, of Scranton, Pennsylvania, took fourth place, crossing the finish line in 1:40:05.  Now that the series has come to a close, he plans to start this fall with some road marathons and a road trip involving a strenuous trail run with beer after.

Full results from the Barr Trail Mountain race can be found here.