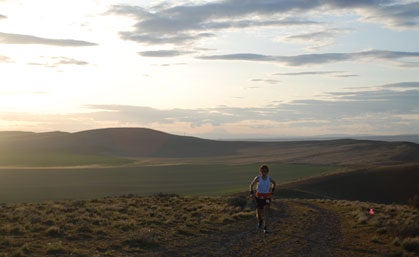 Nicholas Davis (tied for 1st in Ultra Male category) around mile 65 of the Badger Mountain Challenge 100 in Kennewick, Washington. Photo by Rusty Bachman

This year’s Trail Runner Trophy Series is off to a roaring start, with 20 races (of 136 total) down so far, and several runners taking early leads in each category. Below, the leaders in each category took a few minutes to chat with us about their experiences so far, what makes them tick and their goals for the rest of the season. 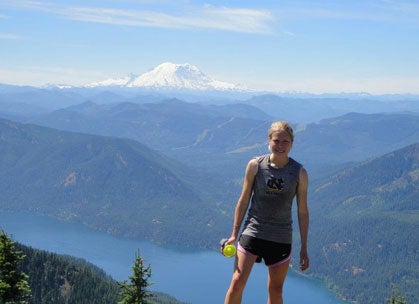 How did you get into trail running?
I have been running ever since my mom had my siblings and I run-walking telephone poles for exercise (PE) as a homeschooler. Although we did not find it fun at the time, something about it kept me coming back for more. So I joined cross country and track all through middle school and until college.

I had no idea that there were such things as ultra races until I graduated college in 2011. It was like this whole other side of a running gem that I never knew of. And that’s where the new passion began … and how I met my fiancé, Mike Johnston, who ran the Badger Mountain Challenge as well last year.

You improved your time from last year at the Badger Mountain Challenge by quite a bit … what went differently this year?
Last year, it being my first 100, I thought it was an impossible goal that I could die doing, or at least be foaming at the mouth before I could finish. This year I had more confidence.

What’s your favorite thing about trail running?
No matter how many bad days I have … there is always another day, another trail, another sunrise, another fellow runner around the corner that renews my spirit and life perspective.

Running has not just been about me and my goals. It has involved my family as a whole … from the time my mom had us running telephone poles to counting on my dad to be at the start and finish of almost every race from middle school to even now. My parents have been my crew at the three 100s I have done. 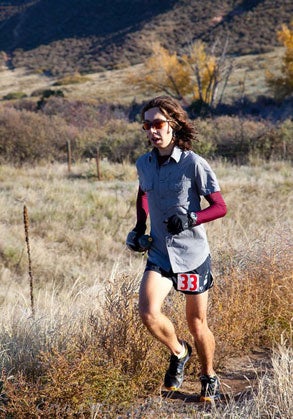 How long have you been trail running?
I’ve been running trail races since 2010. My first race was a multi-sport relay that I soloed, the Mountains to Sound 100. It was equal parts mountain and road biking, kayaking and running. I hadn’t even kayaked before the race and had no idea what I was doing, but that made it an adventure. That race spurred me to run my first 50-miler a little more than a month later, the White River 50, and I was instantly hooked on trail running.

What do you attribute your faster time this year at the Badger Mountain Challenge to?
A combination of things. For one, I’ve focused on improving my downhill running, not braking and shedding my fear of falling. Thankfully, living in Fort Collins gives me access to plenty of gnar trails to sharpen that. I’ve also gotten a handle on my nutrition and found what works for me, which makes a world of difference in the second 50 miles. The last thing was just getting comfortable being uncomfortable. The last 25 miles of the race were still painful. I just kept my chin up and told myself no one was going to pass me.

What’s your favorite thing about trail running?
Running during the week is a form of mental therapy; I often think about research ideas, about my family and friends, or just take in the scenery. When I run alone I focus on the contours of the mountains, the texture of the ground, the sound of the wind … it’s very Zen. Coming back to civilization after an experience like that always gives me a fresh perspective on life.

Do you have plans to run other Trophy Series races this year?
I’ll be at the Bighorn 100 this year, otherwise the other races on my schedule (Quad Rock 50, Leadville 100) aren’t on the list. I might do the Bear Chase in September. I haven’t run a 50K or 50-mile race on a flat course, and it might be fun to see how fast I can go. 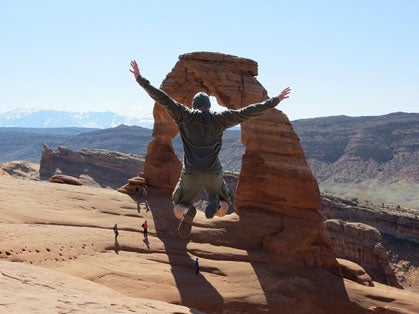 What was your experience at 24 Hours of Utah like this year?
The race was very cold and occasionally windy, but facing and overcoming hardships is part of the reason we do these races.

The race has you alternate running odd laps clockwise and even laps counterclockwise. So as I saw friends coming, we were able to high five each other and cheer each other on.

My wife is my biggest supporter for these events and I was able to see her or my daughters on each lap. That always gives me a boost. My parents and brother also drove over for the day to cheer me on. On the last out and back, my dad, age 69, decided to join me. We spent the time pointing out rock formations and just enjoying the time. It was a great way to finish up and a time I’ll cherish.

What other races have you done in the past?
My ultras over the last few years include the Leadville Silver Rush 50, Leadville Trail 100, Big Horn 100, Ultra-Trail du Mont-Blanc 100 and Moab 100.

What’s your favorite thing about trail running?
Running on roads seemed to be a lesson in monotony. You are stuck in “How far have I gone?”, “How far do I still need to go?” and “When will this be over?” mode.

Running trails, for me, seems to be more about the moment.  I can get lost in the joy of dodging around trees, jumping rocks, alternating up and down hills, enjoying the scenery. Climbing some of those hills can easily devolve into “ughh … will I get to the top?”.  But it is all worth it when you reach the top and look out over the world.

What advice do you have for others?
It’s never too late to get into running. I’ve always been active and into sports, but I ran my first marathon on my 35th birthday. I finished my first trail 100-miler at 40. Get out on a trail.  Hike, bike, run … whatever, just get out there. 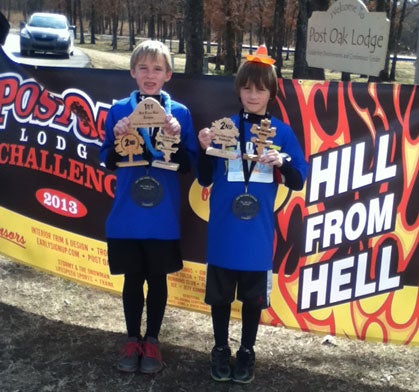 You’re 11 years old! It’s pretty amazing that you’re running long distances on trails at your age. Do either of your parents trail run?
Yeah my dad does, and my brother does too. But my dad can’t keep up with my brother and me. I like running in the woods better than the road or the track.

You ran two races in the same weekend at the Post Oak Lodge Challenge, is that right? Was your body tired on the second day?
Yes, both this year and last year, I ran both the 25K and the half marathon. It was hard because it was hilly, and hot the second day, and I also fell into a mud puddle. But I wasn’t really that tired the second day.

What are your running goals?
Join my brother as a Marathon Maniac on April 20 at the Free State Trail Marathon in Kansas. I want to break the record for most trail marathons and ultras ever run, and also make the Olympics and run the Boston Marathon when I turn 18. 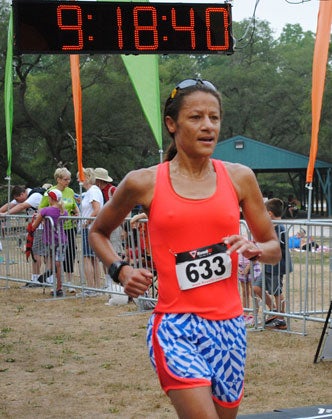 You’ve packed in quite a few races so far this year already! Which has been your favorite?
Laurel Run Ascent, Church Hill, Tennessee. Very scenic trails that included ridges, gorges, creeks crossing, wildlife and beautiful views of waterfalls. The outstanding volunteers were so encouraging, and the course was very well marked. One of the post-race food items was delicious barbecue sandwiches. Most importantly were the new friendships I acquired—Tennessee hospitality at its best!

Anything else you’d like to share about yourself?
My passion is running, and God has truly blessed me with the ability to run. I look forward to establishing new friendship as continue my weekend road trips around scenic trail races across the U.S.