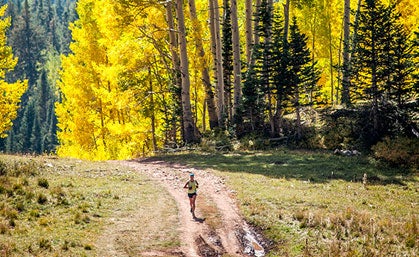 2013 is going to be a big year for many of you, as you set your sights on new races, new distances or new PRs. This might be your year to bump up to the ultra distance, to give skyrunning a go, to plan a weekend road trip around a scenic race across a state line or two.

Whatever your ambitions, we’re here to help, with the 2013 Trail Runner Trophy Series, presented by GORE-TEX, the largest points-based trail-running series in North America. Back for its ninth year, the Trophy Series comprises 138 fabulous, independently run events for you to choose from. Last year, over 35,000 runners took part.

And the chance to win a little free gear along the way never hurt anyone, right?

Awarded to top point-earners in both marathon-or-longer and non-marathon categories as well as raffle winners, the fantastic prize packages provided by our 14 Trophy Series sponsors are worth more than $700—including a SmartWool running shirt, Nathan VaporWrap hydration pack, Petzl Tikka headlamp, Birki’s recovery sandals, 2XU Compression calf guards and more.

Whether you want to run two miles or 100 miles, in the mountains or through the desert, meditative loop courses or rugged point-to-points—chances are good there’s at least one Trophy Series race near your backyard.

How do I sign up?
You’re automatically entered as soon as you complete your first Trophy Series race. The first step is simply registering for a participating race! Find one here.

How can I win?
There are many ways to win!

How can I track my points?
Beginning in late March or early April, you can check your standing online by clicking here.

Anything else I need to know?
Click here for detailed rules.

How else can Trail Runner support my racing goals in 2013?
Glad you asked! Keep an eye out for the April 2013 issue (available mid-March) of Trail Runner—a special training issue jam-packed with all the info you need to make this season your best yet. In the meantime, sign up for our weekly Inside Dirt newsletter at trailrunnermag.com and follow us on Facebook to keep a steady stream of inspirational stories, how-to articles, gear reviews, race previews, community dialogue and more coming your way.