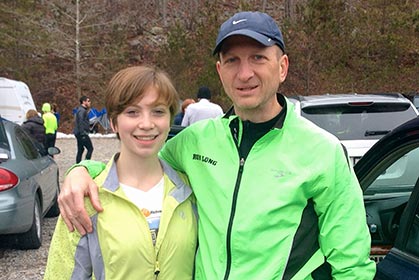 (Final results from the 2014 Trophy Series, as well as next year’s grand prizes, were announced last week. Haven’t heard about the Trail Runner Trophy Series? Find out more.)

Trail Runner caught up with Jeff and Marcy to chat about their love of running, keeping each other motivated and their favorite post-run snack, homemade whoopie pies.

1. When and why did you each start running?

Jeff Smucker:
I had run when I was in college but not much afterward. In my late 30s I decided I wanted to do a marathon when I turned 40. I thought I would check it off my bucket list and be done, but my brother and a nephew became interested [in the marathon] so I ran my second marathon with them. That was eight years ago, and somewhere along the way I became hooked. The first few years I was just on roads, but then a vacation out West got me hooked on trail running and now most of my races are on the trails. The people that I’ve met and the places I’ve been while trail running have been a great source of enjoyment for me.

Marcy Smucker: I was probably 11 or 12 when I began running purposefully. My dad became the assistant coach of the high school girls’ soccer team, and as I was getting ready to roll into junior high soccer, he encouraged me to go out for runs to be better in shape. For junior high, our coach had us run about 1.25 miles before doing technical training. I would go to the older girls’ practice after mine and run with the team my dad coached. They ran about 3 miles. Out of season I would run 5Ks, and eventually I decided I wanted to do a half marathon when I was 13. I ran a few more, and few years later my dad introduced me to trail running. When you take a sport you already love and add a dash of adventure, well, you’re going to get hooked.

2. When you signed up for the Trophy Series, did you think you had a shot at being age group champions?

JS: I’ve had success in the central Pennsylvania trail series and there are a lot of good runners here, so I knew I would have a chance.

MS: This was my first experience with it, and I had no idea how many girls under 19 would be competing. I’ve never really been the fast one in big races, especially my first time through. I thought I’d run as many races as I could and give it a shot. I knew I’d have fun and get in shape along the way anyway, so winning would be a bonus.

3. What made you choose the races you competed in?

JS: I run as many central Pennsylvania races as I can schedule. There is a local trail series and I definitely try to run in all of those races. Beyond that, I try to get in a few unique races that I might have to travel farther for.

MS: It’s kind of funny, actually. I entered most of the trail races my dad suggested. He would say, “Do you want to run (insert treacherous trail race name)? It’s in a few weeks.” I’d always shrug and say, “Sure, why not?” That’s just how it worked. I’ll admit, for some races (cough, Hyner [View Trail Challenge]) I was under-prepared. I suffered a little but, I got through it.

4. Do you ever need to motivate each other to get out and train? Do you train together?

MS: More days than I care to admit, I needed my dad’s motivation to get out and run. That’s the hardest part, getting out. The running part is easier—you’re happy and feel good afterwards. We run together a lot. We like to go on a moonlight run when it’s just snowed. We go to the top of the mountain above State College and look out over the lights. It’s one of my favorite things to do now.

JS: One of my joys these last few years has been running in the mountains with Marcy. She has also been one of my pacers at numerous ultramarathons, including my first 100-miler. She was pacing me when I passed out. We had a great snowy run together after dark in the mountains above State College over Thanksgiving. We have a regular Thursday trail-running group in State College and when Marcy is around she joins us. She also happens to make the best homemade oatmeal whoopie pies as a post-run treat for everyone—whenever we can convince her to do so!

MS: I’ll go out with his trail-running buddies on Thursdays and pay them off with whoopie pies at the end for my being so slow. Regardless of my pace compared to theirs, I feel they appreciate me and I love going to see those “fast trail dogs” dashing through the forest. They provide me with a lot of inspiration.

Dad is still faster than me. He always pushes the pace and is one step ahead of me. I’ll run a little faster to even it out, and he’ll go one more step faster. He’s definitely made me a better runner. Maybe someday I’ll catch him … or maybe not. He’s just as stubborn as I am.

5. What are your future running plans?

JS: I plan to keep running in local trail races and training with great people in central Pennsylvania. My brother and I have also been picking a destination trail run every year and spending a few days in a different area. We have been to Death Valley, the Grand Canyon and the island of Dominica, and are planning a trip to southern Utah next May. This is a lot of fun and I hope to continue this into the far future. Perhaps Marcy can join the fun when she is able.

MS: This fall I was participating in college Division III soccer, but now that the season is over and I am conveniently located next to the Blue Ridge Mountains of Virginia, I can trail run to my heart’s delight. There’s a local group here in Harrisonburg that goes out every Wednesday. But every time I’m home, I’ll always be up for a run with dad.  Basically, I’m set to be a happy runner for a good many years to come.