With a little over four months left in the 2012 Trail Runner Trophy Series, we’ve tallied points from 42 race results (received by June 7).

Leading the men’s Ultra Division is Jeremy Bradford of Denver, Colorado, who most recently completed the Rocky Mountain Double Marathon in Laramie, Wyoming, on July 27. Despite relentless wind, Bradford says it was an enjoyable day. Due to the multiple-out-and-back format of the course Bradford was able to see and cheer on his wife (who was running her first marathon), other friends and racers.

His win, though, was a surprise. “Looking at past performances for that course, I really did not expect to place so well,” says Bradford, who clocked the 12th fastest time in history on the course, 8:19:05.

“In the first out-and-back, at least 15 people were ahead of me. I was shocked to find out that everyone ahead was actually in the marathon. From that point on, it was all I could do to hang on to first. Second place was gaining on me considerably in the last 13 miles.” The second place finisher finished than five minutes back.

Next up in the series for Bradford? South Dakota’s Black Hills 100 Mile on June 23. 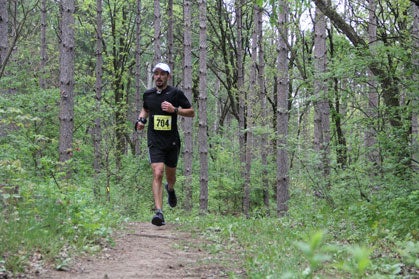 The women’s Ultra Division leader is 28-year-old Melanie Peters of White Lakes, Michigan. The former University of Miami track and cross-country runner and 2008 U.S. Olympic Marathon Trials qualifier is leading the women’s division by almost 100 points. Even more impressive, she’s only run three ultras … ever. “I guess ultras were the next step,” she says.

And while her racing plans this summer include a few more Trophy Series events, she took home first at Wisconsin’s Ice Age 50 Mile, part of the Montrail Ultra Cup, securing her one of the last elite spots for the Western States 100-Mile Endurance Run in California later this month. Running Western is an opportunity she says she can’t pass up. Of her training now, though, says Peters, “I don’t have the slightest idea what I’m doing!”

For the top three in the Ultra Division and the leaders of the Non-Ultra Division (broken down by age group), see the compiled leaderboards below. Current standings are based on official results received by June 7. If you have questions and/or concerns about points, please email us at events@bigstonepub.com.