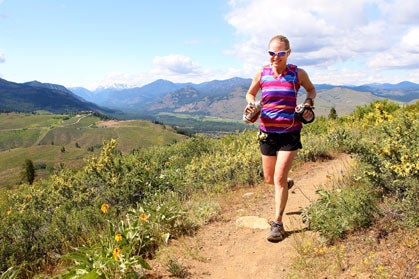 Finding a way to fit running into our daily lives can sometimes be quite the creative challenge. Between work, school, families, our social lives and other obligations, our trail runs often have a lot with which to compete. And for those of us who can’t reach trailheads right from our doorstep, “trail-commute” time adds to the challenge.

So we reached out for some tips on how to fit it all in. We spoke with Genia Kacey, 37, of Sultan, Washington, who is currently on the leaderboard for the Trail Runner Trophy Series “Mile Mogul” category, with 150 Series miles run thus far. The top woman and man who run the most Series miles this season, along with the woman and man who tick the most Series races, will win free entry into next year’s TransRockies Run3.

We also asked our Facebook followers to chime in on how many weekly miles they typically fit into their schedules, and where the find (or how they create!) the time. Below are 10 tips for making it all work.

1. Wake Up Early. Like, Really Early.
When it comes to trail running, early bird really does get the worm. Says Kacey, “I get my long trail runs in on the weekends … get up bright and early and shoot for 20 to 30 miles before the family gets up.”

2. Or … Stay Up Late
On our Facebook page, Sean Dunlap said he aims for at least 30 miles a week, and runs at night, after his kids have fallen asleep.

3. Run Lower Mileage, Ramp Up for Races
100-plus-mile training weeks might be doable for those whose full-time job is running. For the rest of us, ramping up to higher-mileage weeks before specific races can be a more practical strategy. Kacey says she aims for 40-mile weeks regularly, but will try to bump up to 70 miles a week preceding 50-to-100-mile races.

4. Split Up Your Training
Says Kacey, “I work full time as an insurance agent at a sit-down cubicle job, so I split up my training. I run five miles on my lunch break and five more after I put my youngest [age six] to bed.”

Anne Crispino-Taylor, who runs from 30 to 70 miles a week, also works full time, and says she often runs doubles in order to squeeze the miles in. “I run home from work (4.7 miles) a couple of days a week, then grab the dog and put in a few more miles. I run to work one day a week. I run at lunch a few days a week. Then, on the weekend I put in long days. And, I also use races as training runs.”

5. Run at Soccer Practice
Practice your sport while your kids practice theirs! Says Kacey, whose oldest daughter played soccer all through high school, “Many years, I ran around the high-school track during my daughter’s two to three hours of soccer practice.”

Facebook follower Leigh Elizabeth Adams, who typically runs 50 miles a week, agrees: “You get creative juggling family and work. I have run at many soccer practices.”

6. Do Errands on Foot

“Five miles to Trader Joe’s, 11 miles to gymnastics,” says John R. Hanson, who fits in 20 to 30 miles a week running errands (literally!) and at night after his kids have gone to bed.

7. Be Willing to Make Sacrifices
“Sacrifice is how you find time,” wrote Ed Kumar on our Facebook page. Heather Monahan, who runs 30 to 60 miles per week, says she trades sleep, as well as social time, for her runs: “During the weekends, I run long instead of going out.” One more suggestion, from Heather Prytula Klotzer: “Pass on TV time. Most people have plenty of TV time!”

8. Multitask
Kill two birds with one stone. Meet up with a friend or running group for a run, so the run can do double duty as social time. If your colleagues, boss or clients run, use the trails as your next meeting room. Or, take the dog for a run instead of a walk, says Karen Melie D’Amore, “My dog makes me find time [to run].” Says Kacey, “Trail running is like having my social time with friends, training and mental relaxation all bundled into one.”

9. Run-Commute to Work
One Facebook follower, who goes by “FruitLunatic FrugtTossen,” manages up to 160-mile weeks by using running as transport to and from work. Jonathan Richard Schmidt concurs: “I wake up early, run to and from work, sneak out for a lunch run—whatever it takes.”

10. … Or Just Quit Your Job
Says Dave Cudby, “I don’t work as hard as I used to is the key!” Arya Jonathan Farahani, who runs 60 to 90 miles per week, wrote, “I quit my full-time job to spend more time in the mountains and trails! No joke.”