In the women’s Ultra Division, Abi Moore, 32, of Fernie, British Columbia, hasn’t finished below first-place female all season long, allowing her to move to an impressive third-place overall (as of results tallied by September 13). In both Trophy Series races Moore completed this year—Sinister 7 in July (her first ultramarathon) and Iron Legs 50 Mile in August—not only did she finish as the first female, but she also crossed the line in the top 10 overall.

“Sinister 7 was my first ultra so I was unbelievably nervous yet incredibly excited. It’s close to my hometown of Fernie so had a lot of amazing support throughout the race, including from my husband, Mike, who was running it for his second year,” says Moore. “Perhaps going in with blind excitement worked in my favor, too, as I was purely aiming to make it to the end before cut off.”

At the same time, Jeremy Bradford, 35, of Denver, Colorado, is holding strong to first place in the men’s Ultra Division after completing five races and holding onto over 1000 points, double that of Glen Redpath, 47, of New York, New York, who is currently in second place. Most recently, Bradford completed a crossing of the Prince Edward Island.

In the Non-Ultra Division, Kelly Rupoli, 48, of Guelph, Ontario, moved into the lead of the 40-to-49-year-old age group after a strong performance at the Muskoka, Ontario’s the Limberlost Challenge 28K.

**Please note: Points listed below are based on results received and tallied by September 13, 2012. If you have completed a race(s) that have not yet submitted results, please contact the race director. Feel free to reach out to us with any Trophy Series-related questions: events@trailrunnermag.com. 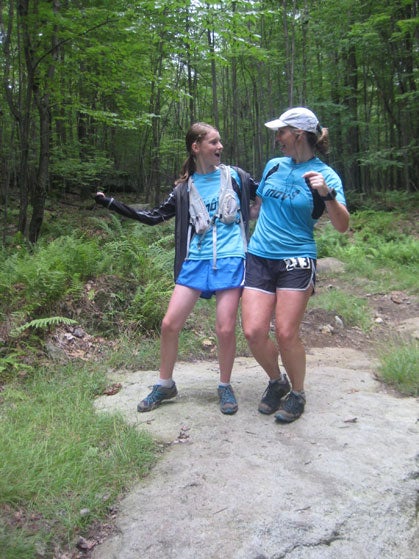 Trophy Series’ Michele Hartwig pauses for a photo during the Big Bear 12-Hour Race in Bruceton Mills, West Virginia, with her 12-year-old daughter, Tasha, who paced her through one 6.5-mile lap of the course. “I was overjoyed when my daughter wanted to run a lap with me at Big Bear 12-Hour Race,” says Hartwig. “We ran strong, enjoying the beautiful mountain trails, while singing and laughing. It was a special day when I knew my daughter was proud of me and she knew I was proud of her.”