We’re back with more from our 2013 Trail Runner Trophy Series!

Check out the leaderboard summary on page 3 of this article, where you’ll find the most recent standings for both the “Marathon and Longer” and “Non-Marathon” race categories.

We chatted with several runners who have been leading competitors in this year’s Trophy Series. Read on to discover their trail-blazing stories, reasons for racing and goals for the future.

KARA HENRY (pictured above)
As a long-term competitive runner, the transition into trail running for Kara Henry, 28, of Boulder, Colorado, has been a delight. Nestled in the Rocky Mountains, she’s found her niche while training for and running ultras, including last year’s Bear Chase 50-Miler and esteemed Leadville 100. After growing up in a suburban jungle, Kara’s setting her sights far on the horizon and looking for exciting new places to race, preferably with less cement!
Q&A
Have you always been a trail runner?
I’ve only really been a trail runner since moving to Boulder, CO two years ago. I grew up in the Chicago suburbs and went to college in the Midwest where I ran probably 90% of my mileage on cement. Needless to say, I spent a lot of time injured! Now I’m totally spoiled by the trails in Boulder and love spending four or five hours running in the mountains on a Saturday.

What is your motivation and inspiration for running?
I just enjoy being outside and active. Running is a means for me to see places and things that normal people don’t get to experience. Plus I have a pretty terrible diet…I’ve already consumed 2 cookies before 10am today and that’s pretty standard. I’ve got to have something to keep myself in check!

How was running last year’s Leadville 100?
I went into that race completely under-trained and with the attitude that I was going to spend a beautiful day in the mountains. There was no ‘race’ feeling for me. I’ve signed up for it again this year (after promising myself I wouldn’t) and this time I’m going in with a solid 6 months of training and a completely different attitude.

Where are you hoping trail running will take you in the future?
I’d love to have a crack at some races in Europe. They know-how to do trail/ultra running right … it’s more of a big event/party atmosphere wrapped around the races over there. I also think a stage race may be in my future. I love the idea of racing back-to-back days and covering a ton of ground.

Any words of wisdom for other trail runners?
Everything changed for me when I stopped caring about pacing and running fast. It’s amazing how much fitness you can build just by spending time in the mountains on the trails. Not only do I enjoy training more, but also I’m probably fitter than I’ve ever been. Stop looking at your GPS! 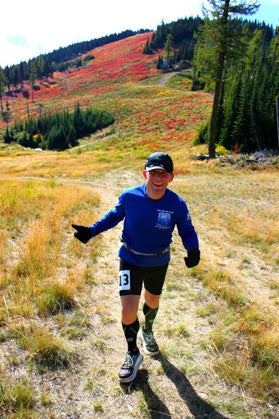 A Marathon Maniac, Robert Bondurant, 40, of Chimacum, Washington, has competed in over 75 marathons and ultras in the past four years. With his hometown being Chimacum, Washington, Robert travels around the West in search of new races to run and 14,000-foot mountains to climb. His mission is to compete in Western States, Hardrock, and what is described as “the world’s toughest foot race”, the Badwater Ultramarathon in California’s Death Valley.

Q&A
Have you always been a keen trail runner? How’d it all begin?
I began as a road runner by walking the 2005 Bloomsday 12k race in 2005, followed by a passionate interest to run it in subsequent years. My first trail-running experience was at the 2008 Roots Rock Spooky 12K race. Then I heard about the Chuckanut 50K race and was shocked: “People actually RUN these mountain trails? And for that distance? I want to be able to do that someday!”

So, your next race is the Black Hills 100. How are you training for the event?
Rest is my training for the Black Hills 100! I ran three 100-milers (Badger Mountain Challenge, Roots Rock Lumberjack Endurance Runs and Pigtails Challenge) between March 29 and May 26, 2013.  In that time period, I also ran two 50-milers (Capitol Peak Ultras and Mt. Si Ultra) in a single weekend, plus the Sunflower Trail Marathon, Wenatchee Half Marathon (road) and Rhody Run 12k (road). Between now and Black Hills, I will just run a few half marathons on roads with short trail runs in between. My running friends keep saying rest, rest and more rest! I’m going to listen.

What have you discovered about yourself from trail running?
I bonk a lot in races over 30K. To be able to push on to the finish by way of a death march or revitalizing at an aid station for a second wind has given me the confidence to go out hard but be willing to change and adapt to a new race goal if my original plan doesn’t end up working. My rule is to keep stomping unless injured, or getting lost in a way that prevents an official finish or missing a cutoff.

What are you hoping to achieve as an athlete?
I plan to eventually run Western States, Hardrock and Badwater. Also, as a ‘peak bagger’, I’ve climbed all of the Fourteen-ers in Colorado and Washington, with just two remaining in California. Running has improved my athletic abilities in this discipline as well by staying active on the trails year round instead of waiting for the summer weather to arrive.

What’s the best advice anyone has ever given to you about trail running?
Don’t go out too fast and over race. I’m getting a little better with that but still working on it. Getting PR’s in every race, when I first got into running, spoiled me.

Anything else you’d like to share with others?
The 2013 Badger Mountain Challenge so far has been the only 100-miler of seven where I didn’t bonk and it was an amazing experience to be able to pick up the pace after 80 miles. I ran at a pace from the start that felt like I could keep it up forever and kept monitoring for any mental changes. This is my plan for Black Hills and Leadville; just run and have fun! 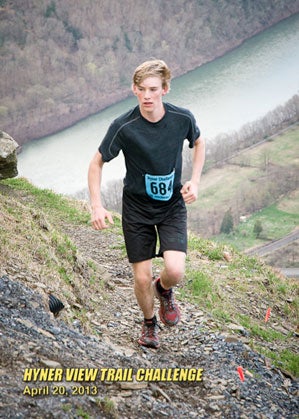 In the small town of Hughesville, Pennsylvania, Bryce Gavitt, 16, has been building his promising talent from the ground up, running multiple races close to home. Last year at the age of 15, he competed in the 11-mile Dam Scramble and finished in 8th place, a significant feat for a runner of his age. Bryce is looking forward to the opportunities that may arise for him, as he keeps collecting more rewarding trail-running experiences.

Q&A
How long have you been trail running, and how did you get into it?
I have been running for close to a year now and I first got into it with encouragement from my parents.

What are the struggles and benefits of being a younger racer?
Being this age and trail running helps because I have youth on my side and I can go through a little more wear and tear on the trail. As that might help a lot, it also has its cons: not having as much experience on the trail like all of the other trail runners.

Where are you hoping trail running will take you in the future?
As a sophomore going into the 11th grade I have started to consider my post high school options such as college and I hope to get a scholarship for cross-country or track. Also as trail running has become very popular, runners have been getting sponsored and a goal of mine is to also be a sponsored runner as well someday. 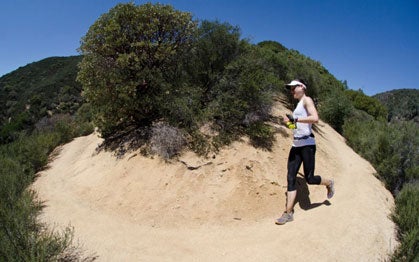 The epitome of determination, Melanie Peters, 29, of White Lake, Michigan, has been giving it her all—and then some—since she began setting school track records at the University of Miami from 2002 to 2006. While she grew up in St. Petersburg, Florida, Melanie was an avid road runner, but the tables turned as she took her speed to the trails in White Lake, Michigan. Now, as a diligent nursing student, you’d think Melanie would take a break, but she’s already looking forward to the Kettle Moraine 100K this Saturday. Good luck, Melanie!

Q&A
How did you discover trail running? Or maybe, how did it discover you?
In 2011 I moved from Florida to Michigan so my running naturally changed from road marathons – which I had done for years—to trail running. In 2012, I did my first trail ultra (a 60K in Kentucky) and from there on out I was hooked on the beauty and variety of courses that trail running offered.

Wow, you’ve placed 1st in the women’s category for eight races in the past two years! What’s specific to your training that helps you compete at such a high level?
I’ve just never been able to shake the competitiveness that road running instills in you. I think we’re seeing it a lot lately as fast, young road racers cross over into trail running. They just don’t know how to go slow and take in the view.

What are some of the biggest highlights in your racing career?
1. Setting track records in college. College is always fun; it’s even better when you can spend your days racing competitively.
2. Going to the Olympic Trials in the marathon in 2008. It’s nice to be in the company of so many great runners.
3. Qualifying for WS [Western States] last year (even though I eventually DNF’d due to hypothermia) and then qualifying again this year to go back and finish it up. Western is just a special race.

Do you have plans to run other Trophy Series races this year?
Kettle Moraine 100K this Saturday, perhaps Waugoshance Trail Marathon or The Legend, Dances with Dirt Hell 50M, and the Heritage Trail Marathon, but it’s kind of up in the air with the busy nursing school schedule I have. As well as a few triathlons scattered here and there, and my longest races are not in the trail series, unfortunately.

What do you enjoy most about trail running?
Hands down, the company that I run with. I get to spend hours on end, running trails with the best friends anyone could ask for. It’s not hard to get a group of people to agree to road trip across the country to do a trail run and, for me, that’s as good as it gets.

Any words of wisdom you’d like to share with fellow racers out there?
I suppose don’t ever think that anything is ‘unattainable’. By chipping away steadily at it you are certain to surprise yourself. Trail running teaches you just how much you can do by being persistent and never giving up. Before you know it you’ve covered 30…50…100 miles!

Click here to see the complete current standings or search for your results.