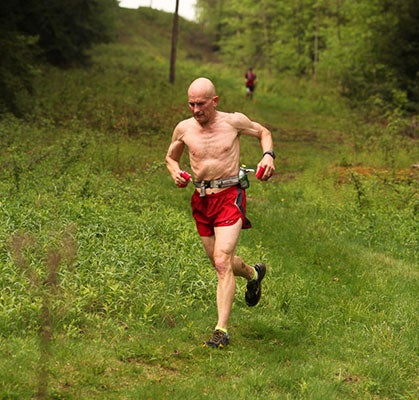 Despite hot and humid weather, Michael Ranck gets it done at the Chief Wetona Challenge earlier this month. Courtesy of Michael Ranck

Michael Ranck has been running for longer than many of us have been alive. A resident of Deer Lake, Pennsylvania, the 64-year-old retired science teacher has been a runner for 50 years, 40 of those running trails. Though he doesn’t log the miles he once did, Ranck is still running—and racing—strong. Two months into the Trail Runner Trophy Series, he leads the men’s 60+ age group, a new category added this year to recognize the achievements of those who run competitively well past retirement.

1. What’s your favorite Trophy Series race so far this season, and why?

The Mile Run Trail Half Marathon. We ran most of the race in snow, which I enjoy. Then, with a half mile to go, we ran through two tunnels carrying a stream under an interstate highway. The only problem was that my shoelaces were frozen until I got back to my car.

2. How did you first get into trail running?

I taught earth science, so I am all about the outdoors. We had a few short-lived trail races in my area in the 1970s, which I tried. Then I read an article about the Western States 100 in Sports Illustrated. I ran the race twice after that, and was hooked on running in the mountains.

At my age, I am not into mileage and real long runs any more. I run by myself all the time, except the days I do two to three miles with my dogs. I try to get in five to seven miles one or two days [a week] on local rails-to-trails and throw in some fast running. I might do hill repeats prepping for a tough trail race or run up and down a nearby mountain during my long run of 15 miles.

4. What advice do you have for other masters-age runners, or younger runners who want to run healthily into their masters’ years?

Throw in some cross training and strength training. Doing some mountain biking and strength training prevents joint problems for me. I also do active/dynamic stretching and use a foam roller to keep leg tissue supple for the dozen or so tough trail races I run each year. Those are usually less than marathon length, so I run them at a faster pace, which is hard on the legs.

5. Do you feel you have a unique perspective on running that younger athletes may lack?

> Find out more about the Trail Runner Trophy Series

Can Extreme Fueling Approaches In Races Lead To Breakthroughs?