Spice up your race schedule by trying something new this summer 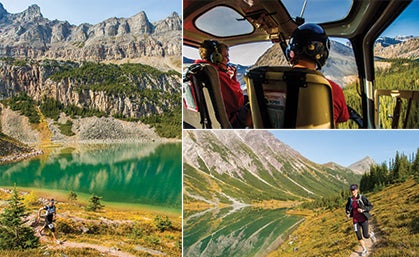 Instead of sticking to your regular race schedule, why not get out of your comfort zone by running something different this summer?

From night races to “heli-runs” to elimination races, we’ve pulled together a list of 10 of the more unusual summer trail races in our 10th Annual Trophy Series.

And, to be entered to win a Nathan VaporCloud or VaporShadow pack, comment on this article by Monday, May 19, and tell us about one of the quirkiest races (Trophy Series or otherwise) you’ve ever run! Note: This contest has since already passed. Congrats to reader Twila, whose name was randomly chosen from those who commented to win a NATHAN pack. 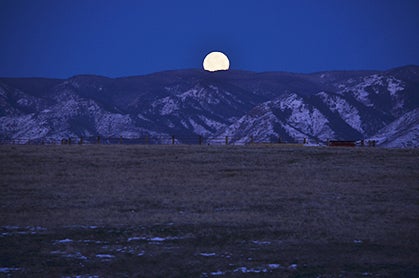 This is the perfect race for night owls and stargazers alike. Beginning at sunset on Friday, July 11 and finishing just after sunrise the following day, this 12-hour solo or relay race covers a 10.3-mile loop along the rolling hills of the Highlands Ranch Backcountry Wilderness area. The course will be illuminated by the full moon, depending on the weather, and course markers include flags, reflective tape and glowsticks.

Touting itself as the “first race of its kind in the world,” this dare-devil two-person team marathon or solo half-marathon race includes running to a mountain lake and back–and then getting on a helicopter. If done as a relay, Team Member #1 will run from the heliport to the lake and fly out by helicopter, while Team Member #2 will helicopter to the lake and then run to the heliport. Partnering with Icefields Helicopter, every participant, including solo runners, no matter their time, will have the chance to take a six-minute helicopter ride during their race. Friends and family can even purchase a helicopter flight during the race and watch their runners from above! 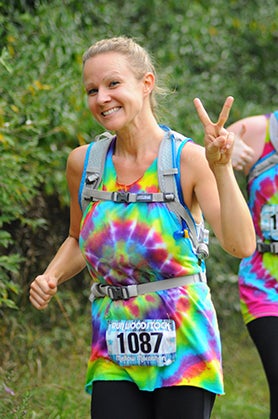 Camp out on the land and set your soul free with a weekend of trail runs and classic rock at Run Woodstock, ranging from the Flower Power 5-Mile to the Hallucination 100, “a celebration of freedom and fitness.” The laid-back and groovy 3-day festival includes live music, wild races and a variety of group activities, including yoga, hiking, moonlight swims and campfires. The all dirt, fully aided run courses are pure Michigan. Finishers can expect peace sign medals and other hippie swag. The Hallucination 100 is also a part of the Midwest Grand Slam. (See next page!)

The Midwest Grand Slam, now in its second year, is an undertaking modeled after the Grand Slam of Ultrarunning (which includes Western States, Vermont, Leadville and Wasatch 100-mile races). Complete four of five of the Midwest’s showcase 100-mile races in the same year, and you’ve got yourself a handmade stone trophy. Unlike the original Grand Slam, the Midwest Grand Slam races are easy to get into (no lotteries). Many also feature lower entry fees, free camping and, of course, geographic proximity to one another–all of which the Midwest Slam website suggests are “not insignificant in ‘selling’ your adventure to your significant other.”

Last year, a hardy 28 runners completed the Slam. The following three are also all part of the 2014 Trail Runner Trophy Series. 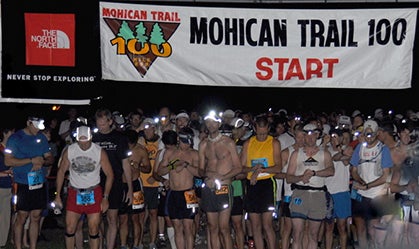 Starting line of the Mohican 100. Photo courtesy of Ryan O’Dell.

Established more than 25 years ago, making it reportedly the fifth-oldest ultra race, the Mohican 100 course sprawls across Ohio’s oak-studded Mohican-Memorial National Forest. Running almost entirely on trail, racers should expect any kind of weather and temperature–the saying goes, “If you don’t like the weather, hang around for a minute,”–however, most of the course is shaded by dense forest. Also of note, the race is a qualifier for Europe’s Ultra-Trail du Mont-Blanc.

This “groovy” race is the last of the Midwest GrandSlam’s 100-mile races. Check out the ‘Why Run Woodstock’ essay on the website (writes The Head Goat, “Put on the Crosby, Stills, Nash & Young album, Deja Vu and if it makes you smile, you will def­i­nitely want to join us at Run Woodstock”), but needless to say, this race is far-out. 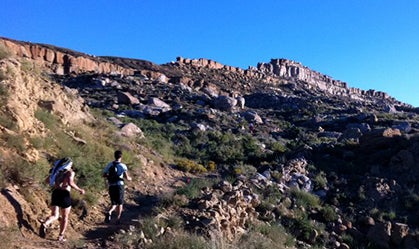 The non-profit Paatuwaqatsi-Water for Life 10-Mile and 50K race courses cover the Hopi country of Northern Arizona, and runners can expect to find themselves traversing desert sand, riparian habitat and high mesa tops. Founded in 2003 by legendary Hopi runner, Bucky Preston, the run will include speakers who aim to both advocate and celebrate the “connection between water and life.” A traditional Hopi meal will be served following the race, and whether you’ve run the race or not, everyone is welcome.

Beware, though: temperatures are slated to run into the high-80s. 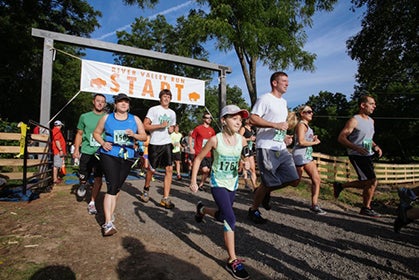 The River Valley Run is comprised of a variety of races for the entire family, from toddlers to seniors, from the 1-Miler Kids Stampede to the 15K Trail Race. The 10K (perfect for first-time trail runners) and 15K trail races twist and turn through forests and rocky scrambles,while the Kids Stampede (for ages 5 to 12) follows the Gunpowder River. The Toddler Trot races around the Kidfest field. Runners can also opt to fundraise for a variety of charities in partnership with the Go Green initiative, River Valley Run’s pledge to be ecologically responsible. 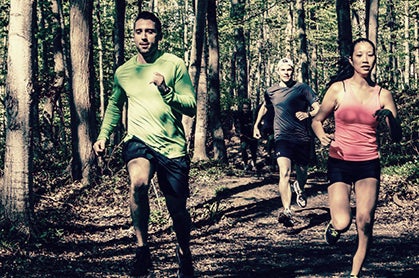 This quirky course, a hybrid of “a traditional trail race and a Ski Cross race,”  as explained on the website, is a short 1.4 kilometers long. But don’t be fooled–this isn’t an easy race. Designed to bring runners “back to the most primitive form of racing,” participants will advance depending on how they fare in five “heats,” each a heart-pounding, quad-busting 110 feet up the course’s single hill. Awards, including cash prizes, will be announced following the five heats. Spectators are welcome and encouraged! 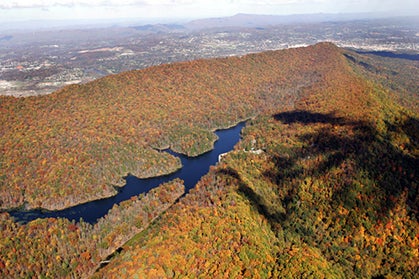 Guarantee a new PR by running a quirky distance you’ve never run before. Named for Bays Mountain Park’s pack of wolves, (in an enclosed animal habitat, so there’s no need to fear!) the Wolf-Run 7-mile race in Kingsport, Tennessee follows the forested trails of the park. And the best part? Naturalists are said to get the wolves to howl for runners crossing the finish line.

9. Try Racing on the Slopes 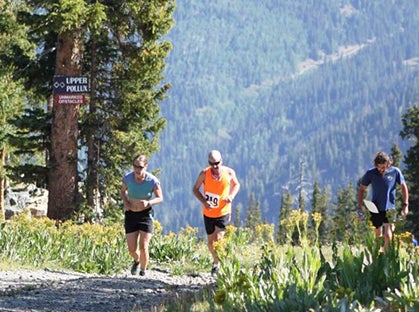 The Taos Ski Valley Up & Over Run starts at an already-dizzying 9,207 feet– and you can be sure that you’ll only be climbing. True to its name, the course begins with a grueling 3-mile climb, (you’re already looking at 2,000 feet on elevation gain!) before topping off at Lift #2, with, the race promises, “amazing views of Kachina Peak,” filled with bighorn sheep that call the mountain home. Stick around after the race and you can listen to live music outdoors as awards are handed out. 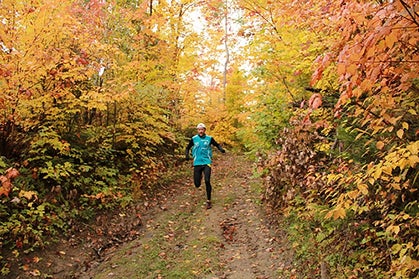 Photo by Rob Beaudry of Fineline photography, courtesy of Run Off the Grid.

Boasting itself as Northern Ontario’s “longest, toughest and most remote trail run,” this race runs through creek crossings, gravel pits, rocky sections and a sand dune. Held at the end of summer, the autumn colors of the Laurentian Mountains can be seen in the distance. Says one runner, “I haven’t been that dirty and intentionally gone in mud holes that deep since I was a kid … what a rejuvenating feeling!” Finishers receive hand-crafted medallions, while first-place male and female winners receive hand-carved wood trophies.

These are only a small sampling of the 150 North American races in the 10th Annual Trail Runner Trophy Series. Check out the full calendar here!