A stacked field of women and men are readying themselves for a soggy, competitive contest 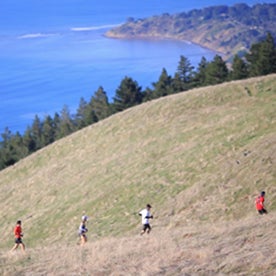 The annual North Face 50-Mile Endurance Challenge (TNF 50) will be run on December 2, 2012, just north of San Francisco in the Golden Gate National Recreation Area. The final races in The North Face series, the event will host the GORE-TEX 50-miler, a 50K, a marathon, a marathon relay and a 5K. The hyper-competitive 50-miler is notorious for its challenging elevation changes (a total gain of 12,480 feet) and big-money purse. The race boasts the largest prize purse in the ultramarathon trail racing. Cash prizes are awarded to the top three male and female 50-milers—$10,000 for first, $4000 for second and $1000 for third.

The race begins with a few miles on roads and fire roads, quickly becoming singletrack that winds along the coast with cliff-top views of the San Francisco Bay and the Pacific Ocean. Runners continue to twist and turn, climbing beside the Muir Woods toward Stinson Beach. The course then follows the classic Dipsea Trail through the moors. The second half of the race moves through a series of interconnected trails, an occasional fire road and finishes at Fort Barry.

Over the past week, storms have slammed the San Francisco area, and racers are bracing themselves for a muddy fight. “The rainfall will be most intense in the North Bay, where two to three inches of rain is expected in lowlands and as many as eight inches in the hills,” says Bay Area forecaster Steve Anderson in a CBS interview discussing the upcoming weather.

Says TNF 50 contender Megan Kimmel, 32, of Silverton Colorado, “[These are runners who] live for the experience of going past a point of familiarity, not only in the a wilderness setting but also in the mind. For me, ultrarunning is about going farther mentally.”

The women’s field is overflowing with the sport’s veterans as well as noteworthy new talent. Kimmel, who was recently named 2012 USATF Trail Runner of the Year, as well as the female USATF Trail Series Champion, says she is excited to go up against the “amazing lineup of women,” including her long-time friend and a fellow U.S. Mountain Running Team member Brandy Erholtz, 34, who will be racing her debut ultra.

Asked why she was racing TNF 50 as her first ultra, Erholtz noted her comfort with hilly terrain (she lives and trains in the mountains around Evergreen, Colorado) and said simply but confidently, “Go big or go home, right?” She plans to think of the race “as a long run amongst friends,” then adding, “I have nothing to lose.”

Last year’s top two women—Anna Frost and Ellie Greenwood—won’t be returning this year, while Joelle Vaught, 37, of Boise, Idaho, who came in third last year (she also took second in 2009 and fourth in 2010), will be going for the win. Vaught has been collecting first-place finishes this year, including the Lake Sonoma 50, the Pocatello 50 and the Waldo 100K, among other impressive performances.

Veteran Krissy Moehl, 33, of Boulder, Colorado, who won the Mountain Masochist 50 earlier this month, is in good form. Swedish runner Emelie Forsberg, 25, the 2012 Skyrunning World Champ, kick started a headline-making career in both mountain and ultrarunning in one fell swoop. Forsberg put herself on the map this year with a second-place finish at the Yorkshire 3 Peaks Race and third-place finishes in both the Zegama Marathon and Ultra Cavalls del Vent. She won a Skyrunning World Series title and took third place in the Skyrunning Ultra Series.

Past TNF 50 Endurance Challenge champs Kami Semick, a 46-year-old American now living in Hong Kong, the UK’s Lizzy Hawker, 36, and Caitlin Smith, 31, of Oakland, California will be in the running this weekend as well. International athletes like France’s Maud Gobert and Canadian Christina Clark, 32, will toe the line too. Boulder’s Tina Lewis, 38, who won this year’s Leadville 100 along with the Miwok 100K, and Bethany Lewis, 34, of Salt Lake City, Utah, who set the women’s Grand Canyon double-crossing record in 2011, round out the field.

The men’s field is also talent packed.  Only two of last year’s top-10 finishers will return (Jason Wolfe, 36, of Flagstaff, Arizona, and Mike Foote, 29, of Missoula, Montana), making room for some Colorado-based ultra-racing newcomers—like Joel Hamilton (40, from Denver) and Chris Siemers (30, also from Denver), both of whom qualified for the 2012 Olympic Trials Marathon, and Cameron Clayton, 24, from Boulder (who set a course record in his debut ultra at the Run Rabbit Run 50-mile earlier this year)—along with a slew of veterans.

Ian Sharman, 32, of Bend, Oregon, fifth at the 2012 Western States, fourth at the UROC 100K in September and fourth in the JFK 50, will be a contender. Hal Koerner, 36, of Ashland, Oregon, and Dave Mackey, 43, of Boulder, Colorado, are both having strong years too. Dylan Bowman, 26, of Aspen, Colorado, has momentum coming off great performances at the Bandera 100K, the Leona Divide 50, the Western States 100 and the Run Rabbit Run 100. Sage Canady, 26, of Boulder, Colorado, another serious contender, won the White River 50 (with a notable course record) and this year’s Mount Washington Road Race; he also took second place in the UROC 100K, his ultra debut. Under-the-radar runners like Leor Pantilat 27, a resident of San Carlos, California, and Rickey Gates, 31, of the Bay Area, are looking to open eyes this weekend as well.