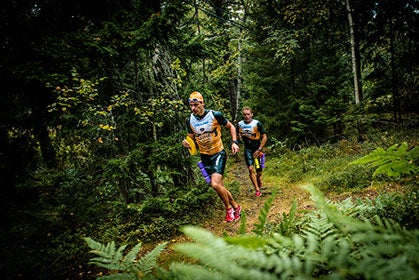 Being the only Kiwi who’d ever raced Sweden’s ÖTILLÖ swim-run endurance challenge, I felt I had to knock this one off. The waves crashed my body against the rocky shore, then sucked me out back out just as quickly. I looked for finger holds in the rock face. Floundering in the water with hand paddles looped around my wrists and my (mandatory) personal buoy banging against my legs, I became more worried about my life than representing my country.

On paper, the race had sounded perfectly doable to me and my race partner, Renata, an accomplished Irish long-distance triathlete. ÖTILLÖ boasts 75 kilometers of racing—65 kilometers of running and 10 kilometers of swimming—over 26 islands of the Stockholm Archipelago, the second largest in the Baltic Sea. For safety reasons, the race is completed in pairs, with partners having to stay within 10 meters of one another all day long. Renata and I called ourselves “Team PenRen.” 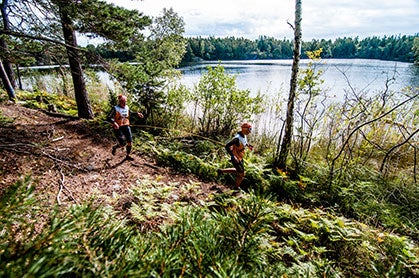 Some runners opted to stay connected with a rope between them. Photo © Jakob Edholm / ÖTILLÖ2013

We’d obsessed for weeks over our gear and how the distances, when broken down between islands, would be achievable. We had calculated goal splits, being very generous on the timings to allow for getting in and out of the water. With these times laminated and glued to our swim paddles, we knew we would have a tough day, but were confident we could make all five cut-offs and finish in time for beers before dinner.

The first island that morning was nature’s slap in the face. The rocky shoreline, boulders and slippery granite that greeted us were not conducive to easy running flow. We worked up a fast scramble and picked our path along the shore, through scrub and over boulders, following carnival tape hanging from the trees.

At the race briefing, we’d been told we needed to skirt several islands due to land ownership issues. After 4400 meters of wobbly walk-running in ankle-deep waters, we were cursing the land owners.

Last year’s winning women’s team had advised us to get our “ins and out” practiced. Five minutes for every entry and exit over 26 islands equates to roughly four hours of dead time. We knew we’d never make the cut-offs if we mucked around. Verbalizing the process as we did it helped: “Pull buoy, goggles, paddles, push off.” 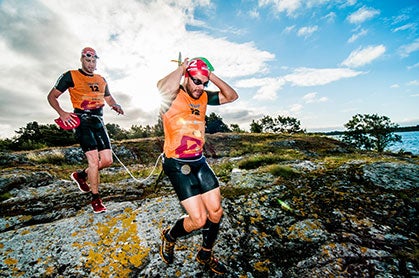 In a race that crosses 26 islands, mastering the transition between land and water was essential. Photo © Jakob Edholm / ÖTILLÖ2013

Once in the water, it felt nice to cool our legs. Each island had a yellow flag or strobe light on the shore that we had to sight towards. Without buoys marking the course, we could take any line we liked, as long as we stayed within 10 meters of each other. This added to the adventure, especially when the current ripped between the islands and pushed us out to sea.

Having grown up near the beach in New Zealand, I didn’t find this too stressful, and just swam in a vector to the current. For my Irish teammate, though, it was a new sensation. She nearly missed the exit points several times, showing how nature often has the final say.

We made it through the next cut-off with 25 minutes to spare. The course headed west for four islands before a crossing of 500 meters to veer south. The weather forecast had given us favorable winds, pushing us to the final island Utö. Several storms rolled through during the day, bringing thunder and hail, but these were brief and almost a relief when running in our wetsuits. 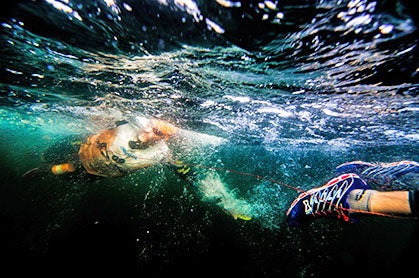 Of the 114 teams on the start line, 99 made it to the finish—the highest completion rate in the eight-year history of the race. Last year, only two women’s teams finished. This year, nine of 13 reached the finish line, pointing to the high caliber of athletes that come to race ÖTILLÖ. There had been over 300 applicants, with 120 teams given slots.

Making the final push up “Devil’s Hill” to the finish line at Utö Värdshus, the team of Björn Englund and Paul Korchak took the win in 8 hours 35 minutes. Their time broke the previous course record (2010) of nine hours and seven minutes. They were one of four teams who finished under nine hours this year.

On the women’s side, mother-daughter team of Bibben Nordblom and Lotta Nilsson led the whole way and set a new women’s course record of 10 hours 55 minutes. Meanwhile, the Irish and Kiwi girls of Team PenRen were ticking off the islands one by one.

We were not hitting our time goals, though, and beginning to fade. Renata’s shoulders were feeling the strain of the paddles and the longer swims in icy waters. Luckily, running in our cut-off wetsuits and swim caps meant we warmed up quickly. As we scrambled over rock faces, ducked under branches, wove through reeds and swam in grey, silt-filled inlets, we wondered how we’d gotten into this crazy race.

The 1400-meter swim from MörtöKlobb to Kvinnoholmen loomed ominously in our minds, as the tough current in exposed waters had taken athletes up to an hour in the past. We got across the straight and out the other side relatively unscathed. At the 20-kilometer run on Orno, we took our wetsuits to our waist and ran hard to make the 6 p.m. cut-off at the south end of the island. Once we passed here, we could take as long as we needed to get the finish. 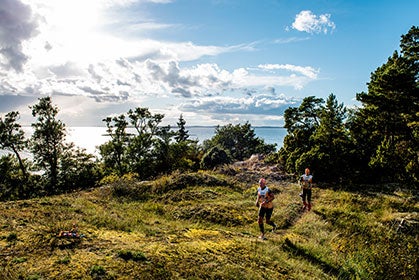 Renata’s body wanted to shut down, but she fought hard to keep her legs moving and support her shoulders that ached with every jarring step. We’d covered 60 kilometers already, in and out of the water all day, and were reduced to a walk-run strategy on the rocky, slippery terrain. We chatted with other teams who also were just “moving forward,” then made the cut-off by 30 minutes and gave garbled interviews to the TV cameras at the timing zone.

Only 7100 meters and five islands lay between us and the finish. We totally underestimated the enormity of this last stretch. The sun was going down, and the current was ripping strongly around the smaller islands, which made our entries into and exits from the water especially challenging. We were slightly delirious and our bodies were beginning to swell. Renata shivered uncontrollably in the wind.

But each time we got out of the water, people cheered us on. Blueberry soup at the final feed station helped as we pushed on, not wanting to swim in the dark. We ran-walked as the orange sun slid toward the horizon.

As we got closer to Devil Hill, where the hotel and finish line sat on top, Renata got a new burst of energy. She bolted to the top and across the finish line.

Her first words: “Can I have a big beer for me and my mate?!” 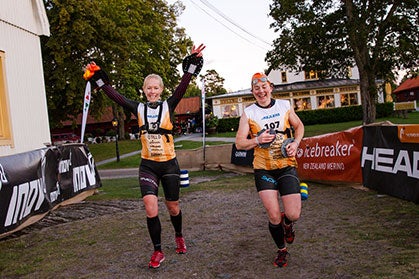 Team PenRen crosses the finish line in triumph. Photo courtesy of the author.