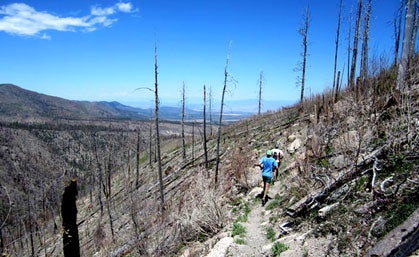 Every May, after the last of the skiers leave Pajarito Mountain outside of Los Alamos, New Mexico, trail runners flock to the area for the Jemez Mountain Trail Runs, which offer half marathon, 50K and 50-mile courses.

Says race director Tom Stockton, “If you want to get a sense of the climb, just start at the ice rink and climb to the top of Pajarito Mountain.”

Pajarito tops out at 10,441 feet—and the 3200-foot climb up there from the bottom of Camp May Road comprises the bulk of the elevation gain for the 50K and 50-mile races.

On my March course preview, I never stood a chance. Thickets of spiky, denim-busting thorn stalks, ever deepening snow (33-inch base at Pajarito Ski Area) and lack of snowshoes ensured that the only way I was getting to the top was via the ski lift.

I did, however, get a good look at the pitch of the final push to the top, which is basically a butt-haul straight up singletrack between ski runs. Have fun with that. And if you’re running the 50-mile, have fun with that twice. 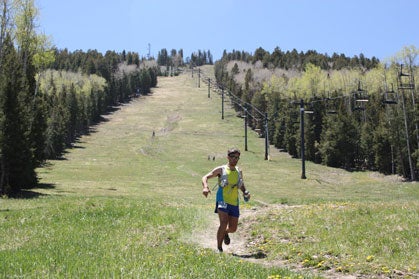 The old course summited three different peaks—Caballo, Pajarito and Cerro Grande. But after the 2011 Las Conchas Fire burned 156,000 acres, the 50K and 50-mile courses were reconfigured. Says Stockton, “Both Caballo and Cerro Grande burned pretty badly, so we don’t go over those anymore. We have a climb up Pajarito that’s longer than we had before.”

The half-marathon, which is the sixth race in the 2013 La Sportiva Mountain Cup Series, is the same as in recent years.  All three events begin in town at 7200 feet. The 50K and 50-miler top out at the summit of Pajarito, while the half climbs to 8852 feet at Guaje Ridge.

Expect to see extensive evidence of the fire ranging from patchwork burns to mountainsides of blackened conifer corpses. Los Alamos Canyon, now closed, is ash gray and looks as though a bomb went off in it.

Still, the course boasts many miles of green forest and stellar views to the Sangre de Cristo’s stretching north and east from Santa Fe to Taos and beyond, as well as vistas of the mesas around Los Alamos.  Looking west from the top of Pajarito, you’ll see the Valles Caldera National Preserve, which is part of the new course.

The Valles Caldera was formed by massive eruptions over a million years ago. The 50-mile race traverses Valle Grande, the largest of the perhaps hundred valleys of the caldera.

As of this March writing, Valle Grande still looks like a giant, vanilla-frosted cake. May’s spring race weather can be fickle, though, says Stockton. “The past couple of years, it’s snowed the week before we’ve marked trail. It can be fairly hot by mid-afternoon on race day, or it could very well snow.”

The races will take place on May 25 this year. Registration closes on April 30. The size limit is 250 runners for each event, though Stockton hinted at a possibly higher number for the half.