February kicks off with a handful of diverse trail races 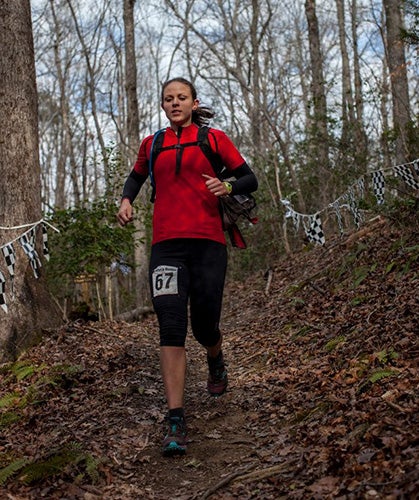 Last week on our Facebook page, we asked what races you had lined up for the weekend. From the flat, fast Rocky Raccoon 100 Miler in Huntsville, Texas, to a cool morning race through the mountains of Orcas Island in Washington—your weekend miles and running company were as diverse as our country’s geography.

Rocky Raccoon 100 Miler
On Saturday February 2nd, the Rocky Raccoon 100 Miler took runners around five laps of smooth, doubletrack trails, with less than 5500 feet total elevation gain and loss. With a generous 30-hour time limit, a strong walking pace could get the job done.
Ultrarunner of the Year in 2012, Mike Morton, from Lithia, Florida, continued his winning ways to start 2013 off right. His 14:28 finish line was well shy of Ian Sharman’s course record of 12:44, but he won the race handily nonetheless. Morton says in 2013, he will focus on the 24-hour championship in May, the Western States 100 in June, and the Spartathalon in September. He told iRunFar.com, “It was a tough day! I struggled from about mile 20. I felt a bit run down still from being sick.” As for the record: “It would take a strong tail wind (30 mph) for me to ever come close to [Ian’s] mark!”
Nathan Leehman, from Charlotte, North Carolina, took second with 16:02 and Steve Speirs of Virginia Beach, Virginia, was close behind, crossing the finish in 16:16. In her 100-mile debut, Nicole Studer of Dallas, Texas, crushed the field, with a 16:55 finish. A fellow Dallas native, Shaheen Sattar, followed two hours later (18:23) and Shar Blackford (Columbus, Ohio) took third in 20:07.

Uwharrie Mountain Run
The Uwharrie Mountain Run in Ophir, North Carolina, offers 40-mile, 20-mile and 8-mile options, made up of what the race website champions as hilly and treacherous terrain. Four-time Uwharrie veteran Sophie Speidel, 50, of Charlottesville, Virginia, described the course to us via email: “It is a beautiful singletrack with lots of runnable ups, good grinding climbs, deceptively tough technical sections and creek crossings. Most runners have a significant slow down on the second half…but there is plenty of cheering from both sets of runners [20 milers and 40 milers].” She also highlighted the competitive atmosphere of the event, thanks to a number of local clubs who participate.

Orcas Island 50K
In Washington state, James Varner directed the eighth running of the Orcas Island 50K on Saturday. The weather was cooperative, sunny, clear and cool, providing stunning views of Puget Sound, the San Juan Islands and the Cascade Mountains. Runners hoping for the unlikely chance of a day like this in a Northwest February must be why this race sold out for the fourth year in a row. The challenging course boasts over 8,000 feet of elevation change, while the race offers its own unique swath of goodies for finishers—thrift-shop-salvaged shirts screen-printed with the race logo, sampling from kegs of microbrews and live bluegrass at the finish line from local bands. Many runners camp out in bunkhouses in the state park on the island the night before the race, after filling their bellies at a Friday night potluck.

Northwest locals swept the competition. Says Varner, “We had our deepest field and most finishers ever.” The winners, Maxwell Ferguson, of Ravensdale, Washington (4:21), and Jodee Adams-Moore of Bellingham, Washington (5:01), beat out a talented field including past Orcas 50k winners and national level elite runners. Rod Bien of Bend, Oregon (4:36), and Dustin Caseria of Bellingham, Washington (4:45), took second and third respectively, in the men’s race. Course record holder at Rocky Raccoon, Jenn Shelton of Ashland, Oregon (5:23), and Stacie Carrigan of Kelowna, British Columbia (5:43), claimed the second and third spots for the women.

Trail Runner Magazine Associate Editor, Yitka Winn, 3-time finisher at Orcas Island, missed the race this year, but discovered her love for the trails here in 2010: “This race absolutely sold me on trail running—especially because of the lively runners it draws each year and the sense of community that transpires from camping out and running all weekend on the island.”

In the more consistently sunny Santa Monica Mountains of Point Mugu State Park in southern California, the Ray Miller 50 Miler also took place over the weekend. The race honors Ray Miller, or “Ranger Ray” as he was known, who lived and volunteered year-round in the park for many years.