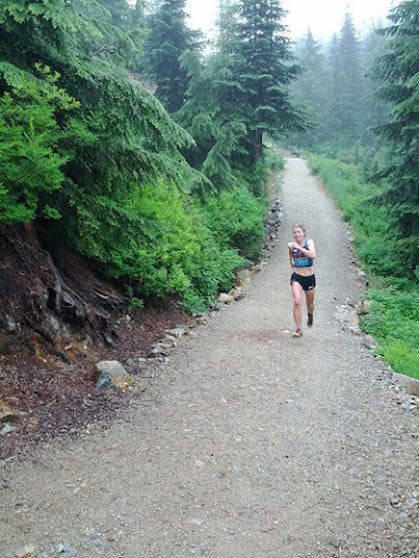 Newcastle, Washington’s Joe Gray, who finished second at the U.S. Mountain Running Championships at the Mount Washington Road Race in June, won his fourth consecutive NACAC title. He covered the steep, technical 11K course in 59:24, over two minutes ahead of James Gosselin, of Timmins, Ontario, who crossed the line in 1:02:04. Robert Krar, of Flagstaff, Arizona (representing Canada), finished third in 1:02:23.

In the women’s race, Evergreen, Colorado’s Brandy Erholtz finished first in 1:16:20. Erholtz, who finished third at the Women’s U.S. Mountain Running Team Qualifer at the Loon Mountain Race earlier this month, also led the women’s USMRT – defending champions at NACAC – to their eighth team title at the event and a sweep of the top three places. Amber Moran, of Arden, North Carolina, finished second in 1:18:53 and Maria Dalzot, of Morgantown, West Virginia, finished third in 1:19:08. The fourth finishing member of the U.S. team was Michele Suszek, of Littleton, Colorado, who finished fifth in 1:22:00.

The Canadian men’s team, led by Gosselin, finished all of their scoring runners before the second U.S. runner – Ryan Woods, of Boone, North Carolina, who finished seventh overall.

In the women’s race, Knoxville, Tennessee’s Kathleen Cusick won in 18:51:38, just two minutes ahead of runner-up Amy Lane, of Westfield, Massachusetts, who clocked an 18:53:38. Debbie Livingston, of Bolton, Connecticut, finished third in 19:20:27.