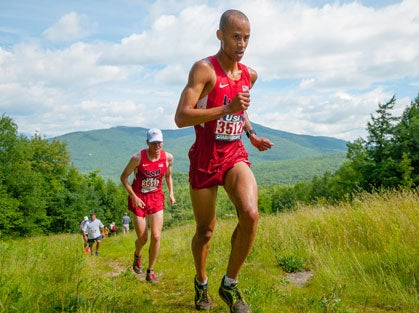 Joe Gray on his way to first place, with Glen Randall close on his heels. Photo by Joe Viger

For men, the Hill Climb course was 12 kilometers, with three loops. The women’s race was two loops, an eight-kilometer course in total.

Gray’s main goal for this year’s race was to be aggressive and keep the pace honest from start to finish.  He says he struggled to stay in front: ”It seemed like every time I took the lead, someone would surge hard and overtake me. Everyone was hungry for the win so there was no lag time at all.”

Finishing fourth, Glen Randall, 26, of Mesa, Colorado, made the team for the second time. Ryan Hafer, 27 (fifth place), and Alex Nichols, 28 (sixth place), both of Colorado Springs, Colorado, will be first-time National Team members, along with Ornelas. 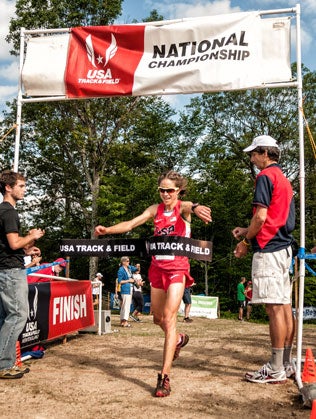 Morgan Arritola breaks the tape at the finish line. Photo by Joe Viger

Joining Arritola and Kremer in Poland for the World Championships will be former U.S. Olympian, Magdalena Lewy-Boulet, 39, Oakland, California, and Megan Kimmel, 33, of Silverton, Colorado. They hope to defend their 2012 gold medal.

Arritola thrived on the race’s positive atmosphere.  “I am a very competitive person when the gun goes off , but before and after I just enjoyed being there,” she says.

This year’s race was one of the most unique events that race director Paul Kirsch has ever organized. He created a down/up race instead of an up/down race, to resemble the World Championship course in Poland—that is, each loop began with a descent and wrapped up with a big climb.

“I think a great mountain race should make you somewhat miserable,” says Kirsch. “I want people at Cranmore to question a little bit why they came out there.  It makes you a better person to conquer something that challenges you both mentally and physically.”

King agrees that the course was an especially tough one. “My downhill is definitely stronger than my uphill,” he says, “but it was a course that didn’t really favor a downhill runner. I’d go from first to fourth in every lap.”

Randall also struggled with the layout of the course, especially on the last lap. “I tried to simulate the course on a lot of my interval sessions, and ended up struggling through the end of a couple workouts,” he says. “Apparently I’m not the sharpest tool in the shed, because the race came and I did the exact same thing.  I’m usually the guy who wishes courses were longer, but I was really wishing Cranmore was a two-lap race during that third final lap.”

Before the race, Randall says he tried to turn off his mind. Says he, “I’ve discovered that when I think about results or times or something like that, it doesn’t happen, but when I just think about going out there and having a good race, the results take care of themselves.” 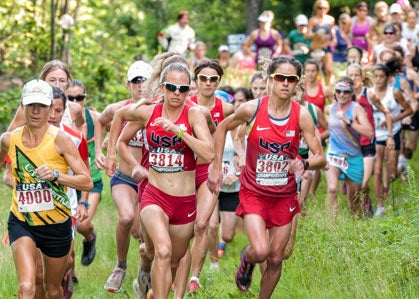 A fast start to the women’s 8K. Photo by Joe Viger

The race also served as this year’s North America, Central America and Caribbean Athletic Association (NACAC) Championships, with athletes from Canada, Mexico and the United States all vying for NACAC titles. Gray, who holds the record for the most consecutive NACAC titles (every year since 2008), says he considers it a tremendous honor to represent his country.

Regarding the U.S. team’s chances in Poland, Gray says, “The team should be a medal contender. We have such a mix of talent and every one of us has the competitive [drive] necessary to compete at that level.”

Ode to the Gray Zone