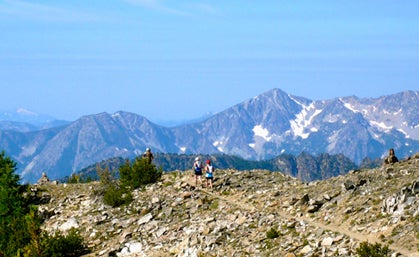 Runners cresting the top of Angels Staircase 60K/35K, outside of Carlton, Washington. Photo by Yitka Winn

There is no shortage of challenging mountain races in the United States. But for the real deal—officiated, point-tallying, high-altitude championships governed by the International Skyrunning Federation (ISF)—the majority of the fun has been over in Europe.

In recent years, the ISF has incorporated a few U.S. races into its three Series divisions—Sky, Ultra and Vertical—but 12 of the 15 World Series races have been in Europe. The 2014 SkyRunning World Series will still have three U.S. races: the Speedgoat 50K, The Rut 50K and the Lone Peak Vertical Kilometer. But even better than that, now North American runners can compete in an entire SkyRunning championship series without splurging on transatlantic flights.

The events are scattered across the country to showcase the mountain gems of the United States. Although most of the races are in the west—Colorado, Washington, Arizona, Montana and Utah—the eastern half of the country gets some representation too, with an Ultra race in Georgia and a Vertical Kilometer race in New Hampshire.

“Ever since I first saw Skyrunning at Transvulcania [83K in Spain’s Canary Islands],” he says, “it captured my imagination with the audacity and beauty of the courses and sheer difficulty of the races. The main priority is to include the most authentically Skyrunning-esque events and to allow easier access for North Americans to the competition and style of running seen in Europe.”

In the 1990s, Skyrunning experienced a brief heyday in the States, but the sponsorship slumped in 2000. Now that trail running is experiencing tremendous growth, the series is back with a vengeance.

Racer requirements for individual races are up to the race directors, but for most events, all you need is a willingness to take on a tough race. Anyone completing one or more races is automatically part of the series and eligible to score points toward the overall series. Each race will also have prize money, and the overall series winners can win money as well.