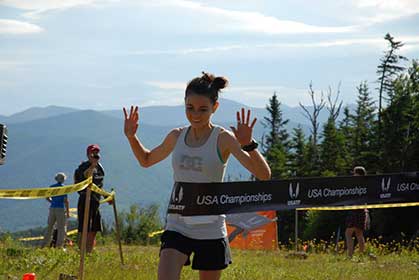 Allie McLaughlin at the moment of her 2014 U.S. Mountain Running victory. Photo by Nancy Hobbs

The duo, both from Colorado Springs, Colorado, will lead the men’s and women’s U.S. Mountain Running Teams (USMRT) at the World Mountain Running Championship in Casette di Masa, Italy on September 14. It will be Gray’s seventh consecutive appearance on the USMRT.

The Loon Mountain Race in Lincoln, New Hampshire, again doubled as the US Mountain Running Championship and served as the sole qualifier for the USMRT. The top six men and top four women qualified to represent the US in Italy.

Gray covered the 6.6-mile course, which features over 3,100 feet of elevation gain, in 45:52, roughly 47 seconds ahead of runner-up Patrick Smyth of Salt Lake City. McLaughlin bested defending US Mountain Running Champion Morgan Arritola, of Ketchum, Idaho, by over a minute in the women’s 4.8-mile race, 47:12 to 48:15.

Nabbing the last spot in both the women’s and men’s fields, respectively, were Megan Deakins and David Roche, who are engaged and will be married in August, just before the World Championship. They hadn’t been planning on taking a honeymoon but Roche says the weekend’s result changed that—with some encouragement from USA Track & Field Mountain/Ultra/Trail Council Chair Nancy Hobbs.

Deakins’ race was first and Roche knew she had qualified when he saw the results on Twitter. But he says staying motivated while climbing the last, 40-degree incline of the race was tough. “At that point it’s easy to back off the gas pedal and be happy where you are,” says Roche, who finished in 53:39. “But then, before I can look behind me to see where seventh place is, I just hear a mighty voice from above [it turned out to be Hobbs] screaming ‘dig deep David, a honeymoon in Italy is on the line!’”

Rounding out the women’s team is Kasie Enman, of Huntington, Vermont, who finished third in 48:20. The men’s team will consist of Gray, Smyth, Eric Blake, of West Hartford, Connecticut, Zach Miller, of Manitou Springs, Colorado, Joshua Eberly, of Gunnison, Colorado, and Roche.

The World Championship course, which alternates each year between an “up” and “up and down” course, will be “up” in 2014, meaning it features significantly more climbing than descending.

The Hardrock Hundred Mile Endurance Run will have the eyes of the ultrarunning world on Silverton, Colorado this weekend as perhaps the deepest field in race history sloughs through the San Juan Mountains. Hardrock’s notoriously difficult lottery tends not to favor elite runners and the race is usually considered a low-key affair, albeit a closely-watched one. The consensus is that 2014 will be different.

Headlining the field is the Catalan superstar, Kilian Jornet, fresh off a record climb and descent of Denali, a win at the Zagama-Aizkorri Marathon and a second-place showing at Transvulcania. He will be joined by 2013 winner Seb Chaigneau, 2011 winner Julien Chorier, 2011 runner-up (and third in 2012) Dakota Jones, 2010 winner Jared Campbell, and two-time Western States 100 winner Timothy Olson. Olson and Jornet are both making their Hardrock debuts.

The women’s field again features Darcy Piceu, the defending champion who also won in 2012, and Diana Finkel, who won the race in 2009 and 2010.